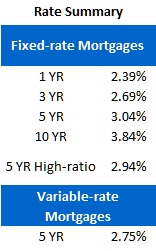 The Bank of Canada (BoC) left its overnight policy rate unchanged last week as expected. (Reminder: variable-rate mortgages are based on the BoC’s overnight rate).

While that widely anticipated news was met with a collective market yawn, the BoC also released its latest Monetary Policy Quarterly Report which is of great interest (pun intended) to anyone keeping an eye on where mortgage rates may be headed. The report gives us the BoC’s view of the main upside and downside risks to our economy, along with detailed insights into all of the factors that influence our mortgage rates.

The latest report carried more cautious overtones than the preceding April version (which I could not resist critiqueing as being far too optimistic at the time).

Here are my key takeaways from the July report:

It was noteworthy, although not entirely surprising given the raft of economic data to support the BoC’s more cautious overall view, that the BoC’s accompanying commentary did not include warnings about mortgage rates rising faster than expected this time around. Many interest-rate watchers speculated that the April warning was really just an attempt to ‘talk the market down’ and thus discourage people from borrowing more.

This belief was rooted in Governor Carney’s repeated warnings that rising household borrowing levels present the greatest risk to our domestic economy. One wonders if the recent changes made by federal finance minister Jim Flaherty to our high-ratio mortgage-insurance guidelines along with early signs of slowing housing markets across the country had more to do with Governor Carney’s omission this time around than any changes in the broader economic data.

Five-year Government of Canada (GoC) bond yields were down 3 basis points for the week, closing at 1.15 per cent on Friday. The popularity of GoC bonds as a safe harbour in stormy economic weather continues to increase and the most recent evidence was last week’s news that foreign investors bought $14.4 billion of GoC bills and bonds in May (the second highest total on record). When other forms of investment are included (equities and fixed-income securities) the May total jumps to $26.1 billion, which was a record high. Fixed-rate mortgage borrowers continue to benefit from this situation with five-year terms still widely available in the 3 per cent range.

Meanwhile, variable-rate mortgage discounts are still miniscule and, in my opinion, they do not justify taking on floating-rate risk when compared to their equivalent fixed-rate alternatives. That said, rates that are fixed for only a short term can be an attractive option for borrowers looking to capitalize on the interest-cost savings offered at the short end of the interest-rate curve. (Rob McLister wrote a good article that outlines the pros and cons of using this approach.)

The bottom line: The BoC’s latest monetary report bolsters my long-standing view that our mortgage rates will probably be on hold for the foreseeable future.