What did surprise me was the rally that followed.

It didn’t even take the usual announcement of new emergency measures with to-be-determined details. Apparently all the market needed to hear from Mr. Draghi was:

Last I checked the Troika (The ECB, the IMF and the European Commission) had just arrived in Greece this weekend to confirm that its government had implemented the additional $11.5 billion euros in budget cuts that are tied to Greece’s next bailout payment. Despite this mandate, Greece’s finance minister presented a plan to the Greek coalition government’s leaders to cut only $7.5 billion euros, and in advance of his meetings with the Troika, Greek Prime Minster Antonis Samaras said that “some recessionary elements in the bailout must change if we are to meet those goals.”

But Greece is not exactly in a strong negotiating position these days and the pay masters who control the $240 billion euros set aside for the country’s rescue package aren’t budging on their demands. In particular, Germany has been adamant that Greece must comply with its bailout conditions at all costs and there is widespread speculation that Germany is now resigned to a Greek exit from the euro zone.

While it is tempting, not to mention politically expedient, for the euro zone’s leaders to whisper that contagion from a Grexit can be contained, we’ve already seen this play out in similar circumstances. To cite some recent examples: the U.S. sub-prime meltdown was also supposed to be contained and Spain’s bailout was to be limited to its banks (stay tuned on that one).

I think hindsight will ultimately show that Mr. Draghi should have more accurately said, “The euro is irreversible … until it isn’t.”

The ECB president’s second statement about doing whatever it takes to preserve the euro was what really juiced the markets, especially after it was backed by German Chancellor Angela Merkel and French President François Hollande. This unambiguous and open-ended reassurance let investor imaginations run wild about what the ECB might do: Massive sovereign-debt purchases? Quantitative easing? Euro bonds (a.k.a. debt mutualisation)? More long-term refinancing operation (LTRO) rounds? Pan-European deposit insurance? A banking license for the European Stability Mechanism (ESM)? Mr. Draghi held up a mirror and let investors see what they wanted to see. Euphoria ensued.

But once their bullish buzz wears off, investors will remember that Angela Merkel has been steadfastly opposed to all of the measures listed above and that her position is firmly backed by German voters. Unless her view has suddenly and radically changed, it’s hard to picture the steadfast German chancellor endorsing the kind of measures that will be required to maintain this newfound investor enthusiasm.

Consider that last Friday the Bundesbank (Germany’s central bank) restated its opposition to any kind of Spanish and Italian bond-buying scheme even after Spain’s ten-year bond yields touched 7.75% and its two-year bond yields spiked to a staggering 7%. Investors had effectively shut Spain out of the bond market and if they do so again, some form of Spanish sovereign debt default will be inevitable without massive and unprecedented ECB bond-buying support.

My gut says that the euro zone’s leaders have quietly agreed that their financial crisis will not be allowed to deteriorate further while the Olympics are in session - to avoid forever linking the two events in the history books. (Mr. Draghi was actually in London when he made his announcement.) But shortly after the last medal has been awarded, Germany’s Constitutional Court will rule on whether its parliament can legally ratify the already agreed upon euro-zone bailouts at the same time as more bailout proposals must certainly be in the works.

That means Germany’s commitment will continue to be retested as its costs to save the euro zone for another day rise in perpetuity. To cite a very recent example, on Monday of last week Moody’s downgraded Germany’s rating outlook from “stable” to “negative”, citing its huge potential costs in both keeping the euro zone together and in managing through a break up. 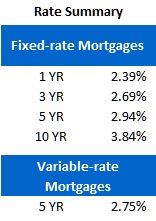 da (GoC) five-year bond yields were 19 basis points higher for the week, closing at 1.34% on Friday. This move was consistent with a broad-based sell off in ultra-safe assets that was caused by emboldened investors who, after hearing Mr. Draghi’s reassurances, decided to put fear in the back seat and let greed drive the bus for a while.

Despite this, the spike in five-year GoC bond yields wasn’t enough to bump up any lender’s five-year fixed-mortgage rates because their gross spreads on these loans have been as fat as a Christmas turkey for the last two months. In fact, several lenders actually dropped their rates last week and borrowers who know where to look can now find five-year fixed rates in the 2.99% range (or better).

Variable-rate mortgages still come with miniscule discounts off prime but a one-year fixed rate at 2.4% offers an attractive alternative for borrowers looking for the lowest interest cost who can handle shorter-term rate resets.

The bottom line: Market rally aside, without the necessary follow through, Mr. Draghi’s market-pumping statements will end up doing more harm than good. The ECB meets next week, so we won’t have to wait long to see whether Mr. Draghi has actually found any new rabbits for his hat.

How to Adjust Your Home Selling Strategy When Prices Are Falling

How to Sell Your Home in a Slowing Market

How you need to adjust your strategy in a suddenly changing market.
Read More
Condos