The good news is that the odds on our mortgage rates staying low for an extended period are steadily increasing. The bad news is the reason - because recent data from around the globe show slowing economic momentum almost everywhere.

Before we highlight last week’s data, let’s recap Bank of Canada Governor Mark Carney’s yet-to-be-revised prediction that our mortgage rates will rise sooner than most people are expecting, which he based on the following three key predictions:

Here is a summary of the data and developments that occurred last week which run counter to all three predictions.

The Strength of the U.S. ‘Recovery’

On Friday, the latest U.S. employment report showed that only 80,000 new jobs were created in June, well below the 150,000 new jobs that the U.S. economy needs each month just to keep pace with its population growth. The report details were equally disappointing with average hours worked basically flat and average earnings growth failing to keep pace with inflation.

Worse still, this weak job-growth trend is occurring at the same time that the U.S. federal government has provided unprecedented levels of stimulus to the U.S. economy, and that stimulus has pushed the U.S. federal budget deficit to more than $1 trillion (!) for four years running.  Those numbers were unthinkable just a few years ago.

The U.S. economy won’t reach ‘escape velocity’ until U.S. consumers get financially healthy and that isn’t going to happen until the jobs data look very different than they do now. Contrary to Mr. Carney’s prediction, I can’t see anything but sand under the U.S.’s current economic footing, especially when you factor in the federal government’s fiscal cliff, which is fast approaching. (The fiscal cliff refers to across-the-board automatic federal spending cuts that will kick in at the end of 2012 unless a political compromise to delay the cuts can be reached – in the middle of the next U.S. election cycle, no less.)

The latest Canadian employment numbers, also released on Friday, weren’t much better. While we added 7,300 new jobs (which was a little below expectations), we lost another 26,000 private sector jobs (after losing 22,500 in May) and average hourly earnings were down for the third month in a row.

Our economy won’t reach full capacity until the demand for, and supply of, labour are balanced and our recent employment trends indicate that we’re still a long way from that point. When you factor in slowing economic momentum across the world’s largest economies, it’s hard to envision any scenario that will lift our economic production back to full capacity in the near future.

The European Central Bank (ECB) had until now stubbornly refused to drop its policy rate below 1% even as the region’s economic prospects have steadily deteriorated. But on Thursday of last week the ECB finally bowed to the inevitable and dropped its policy rate to .75% while also dropping its overnight rate to 0%. Whereas these moves may once have lifted markets, they were long anticipated and were  greeted by investors with a collective yawn.

The ECB’s accompanying commentary cited reduced inflation pressure, high unemployment rates, weaker growth prospects, heightened overall uncertainty and went on to acknowledge  that “the risks surrounding the economic outlook…continue to be on the downside.”

Spanish ten-year bond yields spiked back up to 6.95% and Italian ten-year bond yields closed the week at 6.02%. Both yields are back to where they were before the recent Spanish bank bailout and European Summit announcements were made. Queue the next plan to make a plan.

Watching the euro zone struggle on from one crisis to another is like watching a sloth climbing ever higher in a burning tree. Each time you think the flames will overtake the creature, it lopes up to a smaller, thinner branch and buys a little more time. You find yourself rooting for the sloth to keep surviving but at the same time, the ultimate outcome is never really in doubt.

China’s real economic growth rates are tough to get a handle on because the official data are regularly manipulated. Experts on the ground  try to piece together raw data to form a more reliable picture and that process reveals an economy that is slowing more rapidly than first believed.

These experts note that China’s copper inventories are at all-time highs and that Chinese coal buyers are defaulting on their purchase orders and can no longer secure financing for long-term contracts because lenders believe that coal prices are set to fall on significantly lower demand.

Chinese lenders are also becoming more cautious as property prices fall because real property is the collateral that is used to secure most loans. In an attempt to reinvigorate the country’s GDP growth rate  last week, the People’s Bank of China (PBoC) cut its lending rate to 6%, cut  its deposit rate to 3% and is now allowing lenders to offer up to 30% discounts off of its benchmarked rate. This is the second rate cut by China in a month, so it is clear that the PBoC is acting with a sense of urgency.

Today’s commodity prices are primarily determined by incremental changes in Chinese demand and if that demand slows, there will be another powerful headwind acting against economic momentum in  commodity-based economies – like ours. 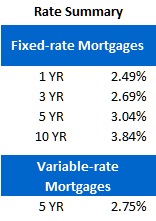 nment of Canada (GoC) bond yields were 4 basis points lower for the week, closing at 1.21% on Friday. Five-year fixed-rate mortgages are still widely available in the 3.09% range but those who shop around can do a little better.

Five-year variable-rate mortgages are offered only at a shade below equivalent fixed rates (2.80% versus 3.09%) and consequently  most of my clients are still opting to pay that small premium in exchange for interest-rate certainty.

The bottom line: I expect that low mortgage rates will continue to offer you a ray of sunshine on what will otherwise be cloudy economic days for the foreseeable future.