To my surprise, Government of Canada (GoC) bond yields (on which our fixed-mortgage rates are based) did not drop last week.

Here are five guesses as to why demand for GoC bonds didn't increase:

While I can see some validity in all of the above arguments, I still believe that our bond yields will fall from their current levels. Here are my counter-arguments to the points listed above: 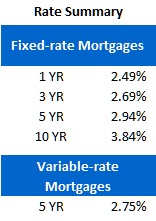 of Canada (GoC) five-year bond yields were 2 basis points lower for the week, closing at 1.36% on Friday. While the five-year yield was flat on an overall basis, this end result masked a sharp increase on Monday followed by a four-day decline - so the trend going into this week is clearly to the downside. Several lenders raised their five-year fixed rates back above 3% last week in response to the previous yield run-up but borrowers who know where to look can still find sub-3% five-year rates available.

Variable-rate mortgage discounts were unchanged for the week, and borrowers considering this option are well advised to consider shorter-term (and cheaper) fixed rates as an alternative.

The Bottom Line: While the recent trend toward higher GoC yields may continue over the short term, for the reasons listed above I still believe that they will return soon enough to their previous ultra-low levels. If that happens, our mortgage rates will stay low for the foreseeable future.