Market bulls hoped that when U.S. Fed Chairman Ben Bernanke finally gave
investors the quantitative easing juice they had long been waiting for it would
ignite a furious equity-market rally that would reinvigorate the U.S. economy.
At the same time, investment capital was expected to flee the safety of low-risk
sovereign debt, like Government of Canada (GoC) bonds, and flow into riskier
assets as investors sought out higher yields.

That was the theory anyway. Reality has so far proven much different. Instead
of triggering the next bull market run, the ensuing rally was more of the
blink-and-you’ll-miss-it variety.

Today’s key question then is why? Here are five possible explanations:

A theory about what the U.S. Fed might really be up to. America suffers
from political gridlock at a time when urgent action is needed. While Grover
Norquist’s Tax-pledge Republicans will fight to their last bullet to prevent any
taxes increases, it’s hard to imagine how the U.S. can address its long term
funding challenges without them. While letting the higher-inflation Genie out of
the bottle is fraught with risks, if Mr. Bernanke can push inflation higher he
will give the economy much needed help in several areas, specifically, by
driving down the value of the Greenback (making U.S. exports more competitive)
and by increasing nominal government revenues while U.S. debt levels remain
fixed (making U.S. debt relatively less expensive). Higher inflation is just a
tax by any other name and given the fact that it touches almost every part of
the U.S. economy isn’t using higher inflation as a policy tool really just
another way to create the mother-of-all-consumption taxes?

To be clear, I don’t think rampant inflation is around the corner because
the excess liquidity that is created by quantitative easing has its strongest
impact on inflation when economies are operating at full capacity, not when they
have huge amounts of excess capacity (as the U.S. economy does now). But central
bankers are known for taking the long-term view and if Mr. Bernanke believes
that the current U.S. political gridlock is firmly entrenched then might he see
higher inflation as a non-political revenue solution to America’s most pressing
problem? 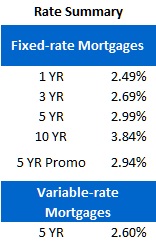 Five-year GoC Canada bond yields fell 9 basis points last week, closing at
1.29% on Friday. Lenders continue to drop rates and as such, a market five-year
fixed-rate mortgage can readily be found at or below 3%.

My best five-year variable-rate mortgage is now available at prime minus .40%
(2.60%) which is the lowest it has been for some time. While this rate looks
tempting at first glance, Bank of Canada (BoC) Governor Mark Carney still
considers household borrowing rates to be the greatest domestic threat to our
economy. Given that, I expect him to remain staunchly opposed to lowering the
BoC’s overnight rate any further. With that in mind, I still think a diligently
managed strategy of rolling over a one-year fixed rate (my best one-year is
currently at 2.49%) will probably prove a cheaper option for anyone looking to
save on interest cost at the short end of the yield curve.

The bottom line: The post-Q3 market reaction confirms what many have
long believed - that there is no magic stimulus bullet that will turn the U.S.
economy around in short order. Instead, we are in the middle innings of a
grinding game of deleveraging. Against that backdrop, government bonds in
fiscally prudent countries like Canada will continue to be in demand and that
should continue to keep GoC bond yields, and by association our mortgage rates,
at ultra-low levels for the foreseeable future.