Statistics Canada recently changed the way it calculates key economic data to
bring its methods into line with agreed upon international accounting standards.
As a result, the debt-to-income ratio for the average Canadian household shot up
11%, literally overnight, to 163% (a record high).

This has inspired lots of foreboding talk about how our “soaring” household
debt-to-income levels are now higher than U.S debt-to-income ratios were at the
peak of their housing bubble. That may be technically true, but it is also
totally misleading.

That’s because the standard method for calculating this ratio uses after-tax
income which isn’t a fair comparison because Canadian personal income taxes
cover health care costs and American personal income taxes don’t. (To put this
difference in perspective, according to my initial research the average American
spends anywhere from 10% to 20% of their after-tax income on health-care related
costs.)

While it has become fashionable to predict that Canada is headed for a U.S.
style housing crash, most economists still think that is unlikely and they use
plenty of data to support their position. (Here is a post I wrote last year
called How
the US Lent Its Way to a Housing Bubble and Why It Didn’t Happen Here if you
are interested in my detailed take on this question.)

To be clear, I readily agree that our household debt levels are too high and
that’s why I have consistently supported the federal government’s attempts to
reign in borrowing by changing the lending policies and regulations used by CMHC
and OSFI. But that’s a far cry from believing that our debt levels are about to
cause our houses to start spontaneously combusting. (Did I just give MacLean’s
an idea for their next apocalyptic magazine cover … or have they used that one
already?)

Before you start loading up on canned soup and fire extinguishers, consider
this sampling of recent comments from the experts I read: 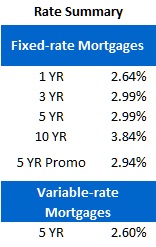 Five-year Government of Canada (GoC) bond yields fell seven basis points for
the week, closing at 1.32% on Friday, and five-year fixed rates are still
available in the 3% range. Effective November 1, all OSFI regulated lenders will
now use the Bank of Canada’s Mortgage
Qualifying Rate (MQR), which is 5.24% today, to qualify borrowers who are
applying for fixed-rate terms of less than five years. That said, those who know
where to look can still find well-established lenders who are not subject to
these new, more restrictive OSFI guidelines.

The bottom line: Like any informed observer who can see beyond his
own short-term self interest to what is best for the whole economy over the long
term, I am concerned about how ultra-low interest rates have pushed our
household debt levels to record highs. But I reject the implication that we have
driven over the debt cliff to financial ruin and are now in free fall just
waiting to hit the ground.