Our Latest CPI Data Suggests That it’s Back to the Revising Board for the BoC ... Again (Tuesday Interest Rate Update)

Editor's Note: Dave's Monday Morning Interest Rate Update appears
on Move Smartly weekly. Check back weekly for analysis that is always
ahead of the pack.

Anyone keeping an eye on Canadian mortgage rates should pay close
attention to the Consumer Price Index (CPI) which is released monthly by
Statistics Canada. The CPI tells us whether average prices have
increased or decreased over the past twelve months, and over time,
changes in the CPI influence Bank of Canada (BoC) monetary policy more
than any other economic measurement.

Before looking at the details
in the latest CPI (released last Friday), let’s highlight a few phrases
from the BoC’s oft repeated inflation-control strategy, which it
includes at the front of each Monetary Policy Report (MPR).

As you will see in
a moment, that last phrase is critical in the current context. If the
BoC’s monetary policy actions are primarily governed by the goal of
steering inflation towards 2% over time, then current CPI trends clearly
imply that the BoC’s next move in its overnight rate should be a
decrease, rather than the increase it has repeatedly warned us about.

The latest CPI data
show that average prices rose by a paltry 0.4% over the most recent
twelve months ending in April (down from 1% in March). The largest
contributor to this drop was falling gas prices but even with the change
in gas prices stripped out, overall CPI would still only have risen by
0.8% - a far cry from t 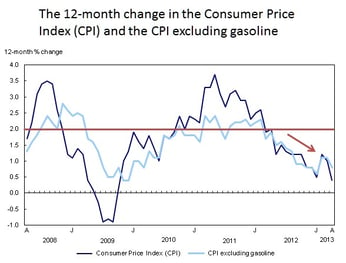 he BoC’s 2% target. As the chart by Stats Can on
the
right shows, our CPI has now been below the BoC’s
target rate of 2% for
over a year and much of our supporting economic data, such as GDP
growth and unemployment rates, are more consistent with continued
disinflation and even deflation, not inflation.

In its most recent MPR the Bank of
Canada forecasted that inflation would return to its 2% target in
mid-2015 but as with so many of the BoC’s predictions of late, that one
is also now ripe for some downward revision. In fact, we seem so far
away from returning to that target rate that I think it’s time to
suggest that the BoC may need to give us a little help to get back
there.

As unlikely as it may sound to Canadians who have grown
accustomed to former BoC Governor Carney’s warnings about imminent rate
increases, at some point the BoC may have no choice but to lower its
overnight rate. Our economy is dangerously close to stall speed and if
you want a look at just how far central bankers are willing to go to
stave off the threat of deflation and/or recession, look no further than
U.S. Fed Chairman Ben Bernanke and his ever-whirring printing presses. A
little drop in our overnight rate hardly seems radical by comparison.

The
BoC’s main reason for not dropping rates has long been our record
household debt levels, which it has called “the biggest threat to our
domestic economy”. But the increase in our household borrowing rates has
slowed dramatically of late and as strange is it may sound, there may
come a day when lowering rates in an attempt to stimulate a little more
household borrowing will seem like a price worth paying if it keeps our
economy afloat.

To be clear, I don’t believe that a rate cut is
imminent and my best guess is that rates aren’t likely to go up or down
significantly for the foreseeable future. In fact, even if the data
continue to indicate that the BoC should cut its overnight rate, the
Bank may still question whether a marginal decrease would have any
material impact on consumer spending in our already well-entrenched,
ultra-low rate environment. But if we’re going by the BoC’s official
inflation-control strategy, I think the recent data continue to lend
support to the rate-decrease option.

Government of Canada (GoC)
five-year bond yields were two basis points higher for the week, closing
at 1.36% on Friday. Not all lenders have raised rates in response to
the recent bond-yield run up and as such, five-year fixed rates are
still available in the sub-3% range.

Five-year variable-rate
mortgages are available in the prime minus 0.45% range, which works out
to 2.55% using today’s prime rate.

The Bottom Line: The
latest CPI from Statistics Canada shows that average prices have barely
risen over the most recent twelve months. These data bolster my
long-held belief that fixed- and variable-mortgage rates aren’t likely
to rise for the foreseeable future and lends support to the argument, at
least in theory, that the BoC’s next change to its overnight rate is
still most likely to be a decrease.