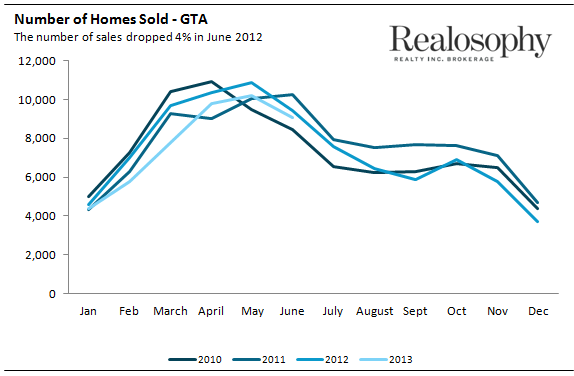 Today I’m going to take a detailed look at the statistics behind Toronto’s real estate market half way through 2013.

The first half of 2013 saw 46,953 house and condo sales, a 10% decline over the previous year and the lowest sales volume over the past 4 years. Many have attributed this decline in sales to changes to Canada’s mortgage rules which were introduced a year ago.

The condo segment led the decline in sales showing a 12%
year over year drop compared to 9% for detached and semi-detached houses
followed by a 5% drop for attached row houses and a 2% decline for condo
townhomes.

The volume of new listings coming on the market dropped by roughly
4% compared to the first half of 2012. This decline in the number of homes coming
on the market for sale helped to soften the impact caused by the 10% drop in
sales this year.

When we look at the decline in new listings by house type
it’s interesting to see a 6% decline in the number of condominium listings
coming on the market in the first half of this year.  This is noteworthy for a couple of
reasons.  Firstly, one of the biggest
fears that most industry watchers have about Toronto’s condo market is that we
are overbuilding and we’ll start to see a significant increase in the supply of
condominiums coming on the market for sale eventually driving prices
down. 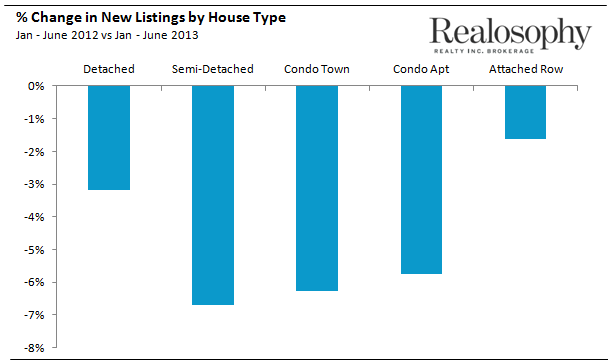 While we are only looking at 2 quarters worth of data it is
still interesting to see the supply of condos decrease when most people are
expecting the supply of resale condos to be on the rise.

This decline in supply is also a great reminder of the
delicate balance between supply and demand and the impact it can have on prices.  Condo prices in Toronto have remained
relatively balanced because the decline in sales was met with a decline in
supply.  Had the supply of condos for
sale increased or even remained the same as last year we would probably have
seen some downward pressure on prices.

During the first half of 2013 average prices were up across
the board with Semi-Detached houses leading the way with a 6.2% increase.  Condo apartments showed the slowest rate of
appreciation at just 0.4%. 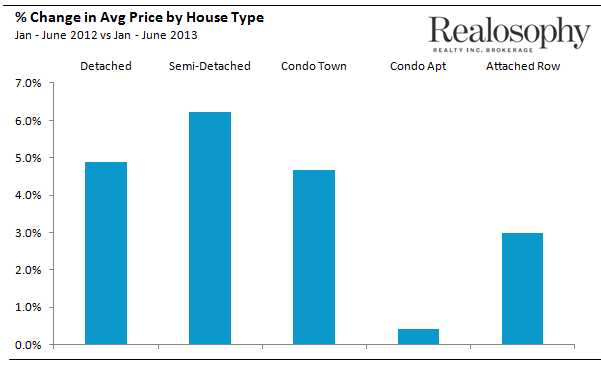 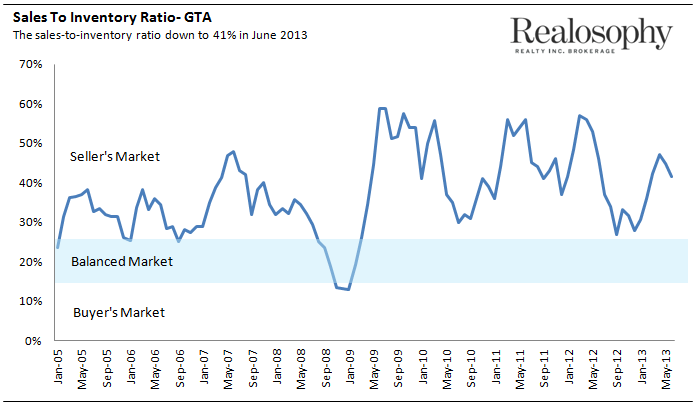 While the market is softening in Toronto we are still deep
in seller’s market territory which explains why so many buyers are still
competing in bidding wars.  But the drop
in the sales-to-inventory ratio means that we are seeing slightly fewer bidding
wars compared to last year.

We can see this in the following chart which shows the
percentage of properties that sold for more than asking, a good proxy for the
number of bidding wars since most buyers are not going to pay more than a
seller’s asking price unless they are competing. 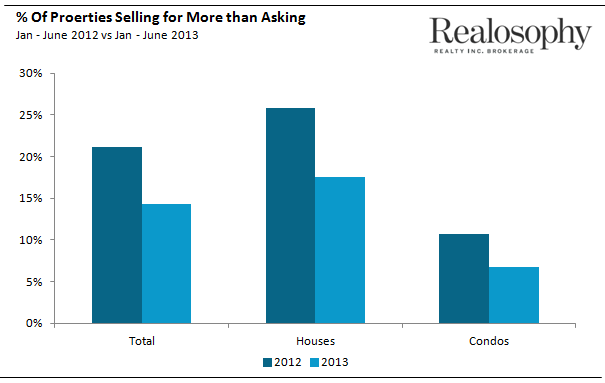 The softening we are seeing in Toronto’s real estate market
is definitely welcome given that the market has been heavily skewed in the
seller’s favour for several years.  I
expect to see this softening trend to continue into the second half of 2013.

John Pasalis is the President and Broker of Realosophy
Realty Inc. Brokerage in Toronto. A leader in real estate analytics and
pro-consumer advice, Realosophy helps clients buy or sell a home the
right way. Email John