Editor's Note: Dave's Monday Morning Interest Rate Update appears
on Move Smartly weekly. Check back weekly for analysis that is always
ahead of the pack.

Bond yields spiked again last week, largely because of new U.S.
economic data which indicates that the U.S. recovery may be gaining
strength. For example, weekly U.S. jobless claims fell to a six-year low
of 320,000 and confidence among home builders reached its highest level
in eight years.

The U.S. Fed has tied the tapering of its massive
quantitative easing (QE) programs primarily to the improvement of the
U.S. employment picture so any positive bump in the employment data,
however short-term and volatile, continues to trigger a powerful
investor reaction.

Because the Fed has also made clear its belief
that a continued rebound in housing markets across the country is
critical to the overall U.S. economic recovery, more confident home
builders also stoke fears that the Fed will take its foot off the
cheap-money gas pedal sooner rather than later.

This
is the other side of the Faustian bargain that the Fed entered into
when it decided to engage in massive and unprecedented levels of money
printing . (See chart.) Since November 2, 2008, the start of the Fed’s
first modern-day QE program,
bad U.S. economic news has been good news for investors beca 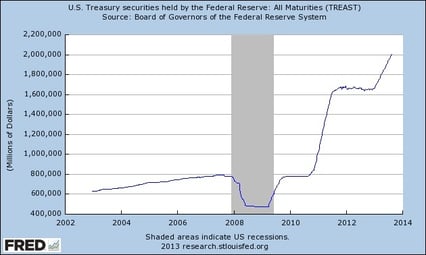 use it
meant that the Fed would continue, and even intensify, its QE programs
to counteract that negative economic momentum. Now we are seeing the
inevitable flipside of this bargain take shape - a situation where
improving U.S. economic data become a signal that the Fed will start to
withdraw (taper) its QE programs.

For a market that many believe
has been operating in a state of suspended animation, where higher
equity valuations and ultra-low bond yields are driven almost entirely
by the Fed’s QE programs, this is a very scary thought. Understandably
so. Investors rightly fear what will happen to valuations everywhere
when the wealth-creating magic of the Fed’s printing presses is
withdrawn.


The Fed isn’t some bit player at the table that can
just quietly cash in its chips and head home. When it exits the market ,
even slowly, there will be a huge vacuum left in its wake – and
investors know it. That is the essence of the QE conundrum the Fed
faces: If the Fed requires sustainable economic momentum before
withdrawing QE, doesn’t the recognition of that very momentum sow the
seeds of its own demise because as it gathers strength, it hastens the
arrival of QE’s day of reckoning?

For example, who wants to own
U.S. treasuries at today’s yields when everyone and his dog expects bond
prices to collapse as soon as the Fed starts tapering and takes its
finger off of the yield curve? Right on cue, foreign investors have
already started pulling out of the U.S. treasury market in droves. If
treasury yields continue to spike, a future rise in U.S. mortgage rates
will inevitably follow. If the Fed is determined to keep mortgage rates
low enough to support a continued housing recovery, won’t it then have
to buy more U.S treasuries to offset this capital flight?

The
circular effects of positive economic momentum heightening tapering
fears, only to have those fears kill the very momentum that created
them, first became clear when Ben Bernanke warned about tapering on June
19th (which I wrote about at the time).
After adopting a more positive outlook on the state of the U.S.
recovery, Mr. Bernanke said that the Fed would begin to slow its QE
programs if the recovery continued to progress. Bond yields spiked,
equity markets tanked, and since expressing surprise at the market’s
reaction, Mr. Bernanke has been beating a hasty retreat from his initial
tapering stance ever since. When the experts describe ending QE as
being easy as putting toothpaste back in its tube, this is what they are
talking about. The Fed, unlike any other player, simply cannot exit the
market quietly. It won’t happen. (See chart!)

So what does this
mean for Canadian mortgage borrowers? The uncertain future of QE means
that there is a lot of fear in the market, so if you’re looking for a
five-year fixed rate, you’re probably still in for a bumpy ride.

Government
of Canada (GoC) five-year bond yields spiked sixteen basis points last
week, closing at 1.96% on Friday. Several lenders have raised their
five-year fixed rates in response and I expect others to follow over the
next several days. If you are active in the real estate market, you are
well advised to lock in a 120-day pre-approval @ 3.39% while you still
can.

Conversely, if you’re comfortable with floating rate risk, I
think the variable rate continues to have more appeal. That’s because
the Fed has said that it won’t even think about raising its short-term
policy rate until it completely unwinds its QE programs. I don’t think
that will be any time soon, and given the tight linkage between U.S. and
Canadian monetary policies, that also means that the Bank of Canada’s
overnight rate shouldn’t be moving higher until the Fed completely
unwinds its QE programs.

Five-year variable rates are still
available with discounts as deep as prime minus 0.55% (which works out
to 2.45% using today’s prime rate). The gap between market five-year
fixed and variable rates has once again widened, and it now stands at
approximately 1%. As the relative discount you get for taking on the
risk of future variable-rate increases continues to grow, this option
only becomes that much more compelling.

The Bottom Line:
GoC bond yields rose higher last week, largely as a result of the more
positive tone in some recent U.S. economic data. Despite this, for the
reasons outlined above, I still believe that the Fed will take a very
long time to taper its QE programs. If I’m right, that will be
especially good news for variable-rate mortgage borrowers.