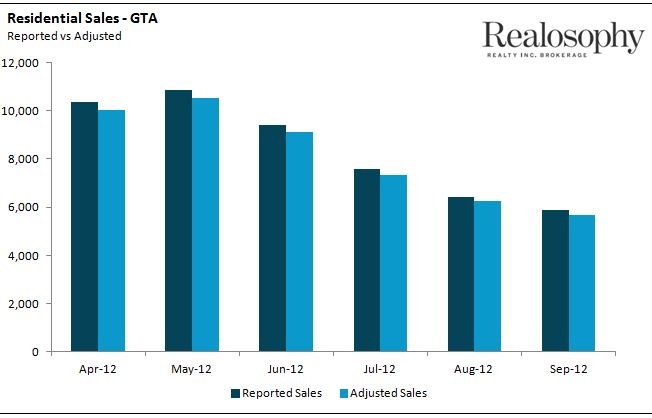 The Toronto Real Estate Board publishes a monthly report called Market Watch which is typically released during the first week of the month reporting on sales in the previous month. As part of their Market Watch report TREB also publishes a press release summarizing the sales statistics for the month.

In July 2011 TREB changed how they report the percent change in sales they publish in their press releases. TREB now compares the current month’s sales as published in their Market Watch report to an “adjusted” sales figure for the same month in the previous year. According to TREB the adjustment takes into account the fact that a number of the properties that were reported as sales a year ago fell through.

TREB has indicated that they are taking this approach because they want to use the most current and up to date data they have available.
On the surface, this all seems pretty reasonable. After all, who doesn’t want to use current data?

But when we look at what’s really happening in a bit more detail, we see that TREB’s approach is not only flawed but it misrepresents the sales statistics they publish every month.

Comparing sales this month (unadjusted) to adjusted sales in a previous month doesn’t make any sense. The major problem with this approach is that the adjusted sales figure in the previous year is always going to be lower than what was originally reported for that month.

The following chart shows the actual sales reported by TREB from April-September 2012 along with the adjusted sales figure they used to calculate the percentage change statistics released in their press releases this year.

Now you might be thinking, who really cares? The differences above appear to be relatively minor.

To see what this looks like in real life, the following chart shows the actual percentage change in sales over the past six months (using sales statistics published in TREB’s Market Watch reports) compared to the percentage change reported by TREB in their press release using a lower adjusted sales figure for the previous year. 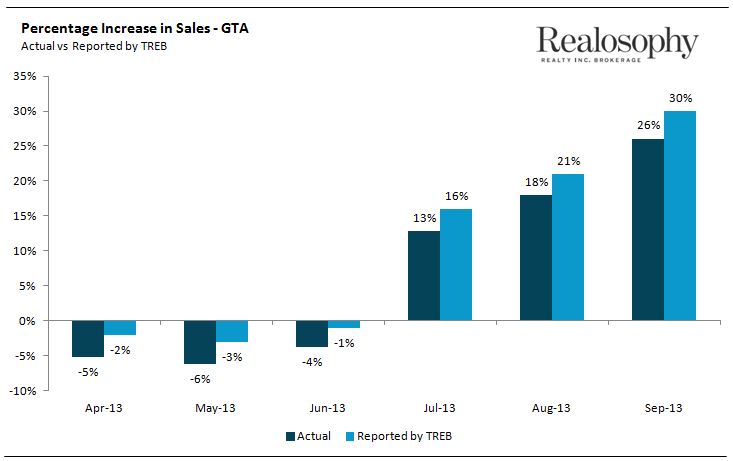 You can see that by comparing sales to a lower adjusted sales figure in the previous year, a 5% drop in sales in April was reported to the media by TREB as a 2% decline in sales. Similarly a 4% decline in June was reported as a 1% decline.

TREB’s argument that they are calculating statistics this way because they want to use the most current data is not a genuine one because they also know that the sales data for the current month is overstated yet they make no effort to disclose this nor do they adjust it down to take into account the fact that many of the sales reported in September 2013 will eventually fall through.

An institution that cared about the quality and accuracy of the statistics they publish would not be comparing unadjusted numbers this year to adjusted figures in a previous year.