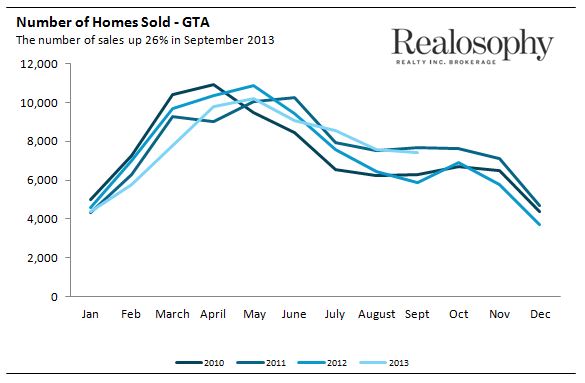 Toronto’s real estate market has seen a significant spike in sales over the past three months. Resale home sales in the GTA were up 13% in July, 18% in August and 26% in September.

The recent rise in sales is likely due to a couple of different factors. Firstly, in July 2012 the federal government changed mortgage rules in Canada reducing the maximum amortization for insured mortgages from 30 years to 25 years. This change made it more expensive to own a home by increasing mortgage payments. 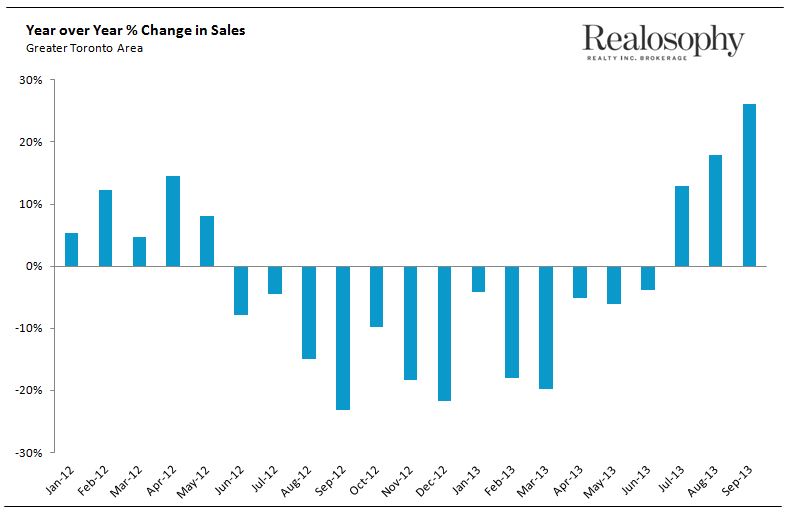 The above chart shows the percentage change in monthly sales (compared to the same month in the previous year) from January 2012 to September 2013.

The mortgage changes introduced last year were expected to price some buyers out of the market resulting in a short term drop in sales. We can see that sales did decline every month from June 2012 to June 2013 above. We also expected many of these buyers who put home buying on hold over the past year to start making their way back into the market twelve to eighteen months after the new rules were introduced. We do believe that part of the increase in sales over the past three months has been the result of these buyers re-entering the market.

The other key factor driving the increase in sales over the past 3 months has been the jump in 5 year fixed mortgage rates. Five year fixed mortgage rates have increased from below 3% in June to over 3.5% by late August. When interest rates increase relatively quickly in a short period of time it typically results in a short term increase in the number of sales in the housing market as many buyers rush to buy before the interest guarantee they have with their mortgage pre-approval expires.

Now that we have some background into what’s driving the recent increase in sales we want to know whether the real estate market is really heating up.

It's interesting to note that Toronto’s real estate market has actually been cooling down over the past few months which is probably not what most people would expect when they hear about a 26% increase in sales.

While sales statistics are an important measure of how the market is performing, it doesn’t really tell you how hot the market is because it’s only a measure of demand and doesn’t tell you anything about the supply of houses on the market. It’s actually the relationship between supply and demand that tells you balanced the market is. 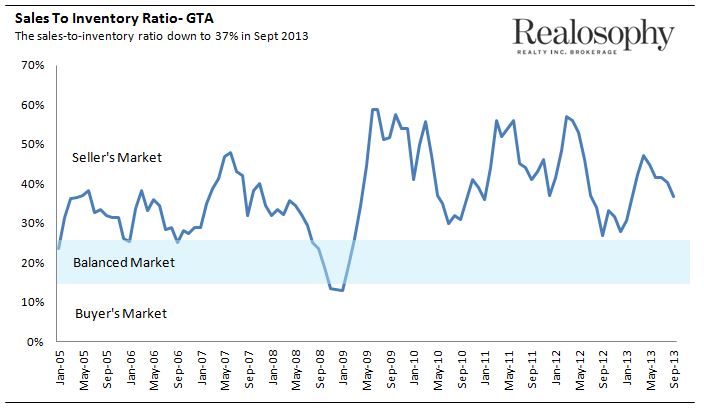 The above chart shows the sales-to-inventory ratio over the past 7 years.

When we report on changes in home sales we typically compare current sales to the previous year rather than the previous month to avoid comparing changes that have more to do with seasonal swings in the demand for houses.

With the sales-to-inventory ratio on the other hand it makes sense for us to compare month over month changes to measure how the market is progressing. The month over month comparison works because we’re looking at the ratio of home sales to inventory, not absolute figures.

But to answer whether or not the market is heating up in Toronto we have to look at month over month changes in the sales-to-inventory ratio and here we see that the ratio has declined to 37% in September after reaching a high of 47% in April showing that the real estate market in Toronto is cooling down.