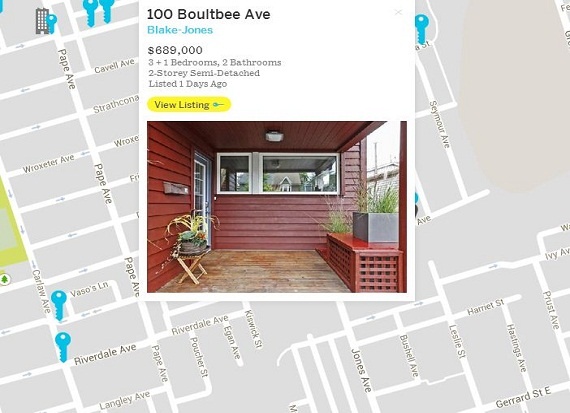 A brilliantly designed house in a hot pocket of Toronto.

This week: Vancouver and Toronto continue to rack up the house sales to Ottawa's chagrin while the Pan Am Games, which is supposed to boost Toronto social and regular housing stock and transit, continues to provide new and amazing ways to get worse.

Elsewhere: Is the American dream of owning a house really worth it? Not if you can't afford it. And India's upper middle class looks to snap up high end real estate as the rupee continues its precipitous fall.

"When several euro-zone countries tottered on the brink of default, investors responded by pouring their money into Government of Canada (GoC) bonds, driving down these yields, on which our fixed-rate mortgages are based."

"All that talk of a hard landing for Canada’s housing market seems a distant memory now."

"Canada’s housing market already topped what economists had expected for the spring and summer, and could do it again this fall."

How Canadians, too, can fend off the long arm of the IRS (Globe)

"If the Canada-U.S. tax treaty won’t quite eliminate your U.S. estate tax liability, consider renting rather than owning real estate."

"Now, the parallel between France and Canada has obvious limits. Yes, both countries experienced ballooning housing prices and slow-growing exports roughly at the same time. But Canada’s resource shuffle channeled much capital and labour toward the export-oriented resource sector."

"Hundreds of thousands of families are going through the pain and struggle of trying to not miss their next mortgage payment simply, because they purchased a home prematurely."

"Luxury projects are designed to cater to a very specific target group and affluent segment of the society, who can afford the exclusive offerings of the segment and are always seeking something better. India has the fastest growing number of high net worth individuals in the world and real estate comprises approximately 40 percent of their investment portfolio."