Editor's Note: Dave's Monday Morning Interest Rate Update appears on Move Smartly weekly. Check back weekly for analysis that is always ahead of the pack.

It’s time to revisit the question that everyone loves to ask: Is it better to go with a fixed- or variable-rate mortgage today?

While we all crave certainty, especially when making important financial decisions, there is no one-size-fits-all answer to this question.

For starters, there are important qualitative factors to consider when choosing one option over the other. For example, if you’re more likely to lose sleep at night worrying that your mortgage payments will increase, you should go with a fixed rate. If you’ll lose sleep worrying that you’re paying too much interest, a variable rate is probably the way to go. Simply put, you can’t put a price on peace of mind.

Once these individual factors are accounted for, just about every borrower I work with asks for my view of where rates may be headed over the next several years. While my crystal ball is as murky as ever, I am happy to explain how various factors influence the future direction of our mortgage rates, and to offer my take on what these tea leaves are currently telling us. (While adding the caveat that the only thing my opinion and $2.00 will guarantee them is a hot cup of coffee!)

In today’s post I’ll try to put a stake in the ground and create a base-case estimate of where mortgage rates may be headed over the next five years (while trying to err on the conservative side.) I’ll then use that estimate to run a variable-rate simulation that will allow you to compare the relative costs of a five-year fixed-rate versus a five-year variable-rate mortgage.

Base Case Variable-Rate Key Assumption #1 - When Will They Rise?

We live in interesting times.

Most of the factors that push mortgage rates higher are benign at the moment, and are likely to stay that way for the foreseeable future: Inflation is well below the Bank of Canada’s 2% target, our GDP growth is benign (notwithstanding the third-quarter uptick we saw last week), and there is little upward pressure on our labour costs.


While all of these factors suggest that our mortgage rates should remain at ultra-low levels for the foreseeable future, the experts I read who hold a lower-for-longer interest-rate view cite the continuation of the U.S. Federal Reserve’s ultra-loose monetary policy as the single most important driver.

Simply put, it is highly unlikely that the BoC will raise its overnight rate, on which our variable-rate mortgages are priced, before the U.S. Fed raises its equivalent short-term policy rate. (For a deeper explanation, please refer to my past posts.) And the Fed has repeatedly said that it won’t raise its policy rate until it has completely unwound its $85 billion/month in quantitative easing (QE) programs.

The Fed has waffled thus far on when it will start to unwind QE, in part because markets have reacted violently to any signs that tapering may soon begin. In previous commentaries, the Fed had forecast that it would completely unwind its QE programs and begin raising its policy rate in mid-2015. But more recently, the Fed has toyed with idea of keeping its policy rate at 0% for much longer.

In recent research papers, members of the Fed have argued that the Fed should extend its forward guidance and commit to keeping its policy rate at 0% until as late as 2018, as a way of offsetting negative momentum when it starts to taper its QE programs.

That softening in policy has caused many of the experts I read to extend their rate-increase forecasts, and to now speculate that mid-2015 would be the absolute earliest that the Fed would raise its policy rate. Nonetheless, we’ll stick to the mid-2015 time frame in our base-case simulation in an effort to be conservative about when rates may rise.

Base Case Variable-Rate Key Assumption #2 - How High Will They Go?

If the BoC starts increasing its overnight rate in mid-2015, how much will it increase by?

When the BoC decides to raise its overnight rate, it often hikes several times over consecutive meetings in what is called a ‘tightening cycle’. If we’re going to assume that the BoC will raise the overnight rate in mid-2015, we also need to make assumptions about how many times it will do so, and how quickly, once it starts tightening.

As luck would have it, last week the venerable Benjamin Tal, Deputy Chief Economist at CIBC, offered some compelling insight on this topic. Here is a summary of what he said:

I agree with Mr. Tal’s view that our rates should rise gradually and over time. But interest rates are influenced by many factors and not all of them are predictable. If we’re going to build a conservative forecast, let’s assume that the BoC never cuts its overnight rate over the next five years and assume  that the overnight rate increases a little faster than we might otherwise expect. 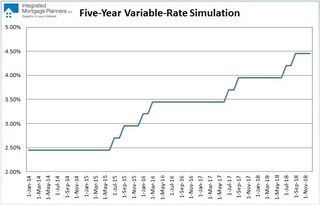 As usual when I run these simulations, I’d like to add one more wrinkle.

In this case, that would mean adding a discretionary payment of $138/month, to make the initial monthly variable-rate payment of $1,336 equal to the monthly fixed-rate payment of $1,474. (Once a variable-rate borrower sets up this extra payment, the lender can put a note on file so that it is taken automatically for as long as you leave the instruction in place, meaning that you don’t have to call every month to keep this arrangement going.)

I love this strategy because it gets you used to paying a higher rate (3.35% instead of 2.45%) and as such, if your variable rate rises, you simply adjust the $138 discretionary payment down so that your total monthly payment remains at $1,474 until your variable rate rises above 3.35%. In the meantime, you pay off your mortgage more quickly and increase the odds that you will have a lower mortgage balance at renewal, even if your rate rises abruptly in the latter part of your term.

Here is the comparison chart (below) with the results from this make-hay-while-the-sun-shines approach for variable-rate borrowers included:

While making the discretionary variable-rate payment only saves a few hundred dollars in interest cost over the initial five-year period, these savings will continue to grow over the remaining life of the mortgage (note that the balance at renewal is several thousand dollars lower).

In summary, even if we assume what would appear to be an aggressive raising of rates by the BoC, there is still a modest savings for variable-rate borrowers. Some may quite rightly say that this small saving is not worth the risk inherent in the variable rate choice – but what if rates do not rise this fast and/or this consistently? In either of those cases, the savings would be much larger.

Five-year Government of Canada bond yields were two basis points lower last week, closing at 1.74% on Friday. Lenders continue to drop their rates in response to falling yields, and five-year fixed rates are now offered in the 3.35% range. Well-qualified borrowers who know where to look may even do a little better.

The Bottom Line: If you can tell me what will happen to mortgage rates over the next five years, I can tell you with certainty whether a fixed or variable rate will save you money. If not, we can only make our best educated guess about what the future will bring. If our rates roughly follow the simulated path outlined above, today’s variable rate would prove the better option over the next five years … assuming that you can sleep at night.

The Real Issues With For Sale By Owner (FSBO) Properties

Why a recent CBC investigation into unethical behaviour by some buyer agents fails to tell the full...
Read More
Safe Investments

Home buyers routinely go for stressful and inefficient plays in the strange game that is Toronto...
Read More
Buying | Toronto and GTA