Last Friday Canada Mortgage and Housing Corporation (CMHC) announced that it will increase its mortgage-default insurance premiums, effective May 1, 2014. Current premiums will remain in effect on all mortgage applications that are submitted before this date, even in cases where the transaction closes well after the changeover deadline.

Bluntly put, the impact on the average borrower will be negligible.

To highlight what the typical impact of this change might look like with an example, let’s assume that a borrower is purchasing a $400,000 property with a $40,000 down payment, that the property will be used as his/her principal residence, and that he/she can qualify for financing using traditional underwriting guidelines:

The chart below summarizes all of the coming changes to CMHC’s insurance premiums: 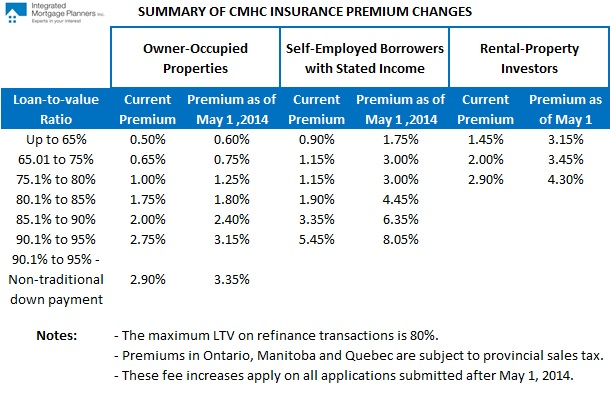 Here are five key points of note relating to this announcement:

Five-year Government of Canada (GoC) bond yields fell by six basis points last week, closing at 1.63% on Friday. Borrowers who are putting down at least 20% on the purchase of a new home should be able to find a five-year fixed rate in the 3.09% range and borrowers who are putting down less than 20% can now find five-year fixed rates for as low as 3.04% (albeit with more limited terms and conditions and the added cost of high-ratio mortgage insurance).

Five-year variable-rate mortgages are offered at rates as low as prime minus 0.65%, which works out to 2.35% using today’s prime rate of 3.00%. Several Big Five banks lowered their posted rates to 4.99% last week so a drop in the Mortgage Qualifying Rate (MQR), which is used to underwrite variable-rate applications, should be right around the corner.

The Bottom Line: Mortgage-default insurance just got a little more expensive for the typical Canadian high-ratio borrower. Nonetheless, these cost increases are justified and should not produce any material impact on our real estate markets. To put our soon-to-be slightly more expensive high-ratio mortgage programs in perspective, consider that they still enable Canadians to buy principal residences with leverage ratios of up to 19 to 1, and at far cheaper rates than any conceivable alternative.