This week we dust off the old crystal ball to offer a fresh spin on the age old question of whether a fixed or variable-rate mortgage will prove the better option over the next five years.

It has been five months since we last compared the potential costs of fixed versus variable and over that time the gap between these rates has narrowed considerably. Market five-year rates have moved from prime minus 0.55% to prime minus 0.65% while five-year fixed rates dropped from 3.35% to 2.99%.

The narrowing gap between fixed and variable rates makes it harder to decide between them. Do you take the fixed rate because it gives you cost and payment certainty for a premium of only 0.64% over the variable rate? Or do you bet that the same subdued economic forecasts that have driven fixed rates lower will keep our variable rates pinned down for years to come?

In today’s post, to help inform this decision, I will provide a rationale for a variable-rate forecast that would leave today’s variable-rate borrowers with about the same overall borrowing cost as those who opt for a five-year fixed-rate mortgage over the same period. You can then decide for yourself whether the assumptions that lead to my conclusions are too aggressive or too conservative, and thus, whether you think the variable rate risk/reward trade-off is worth it.

I would be remiss if I didn’t add the caveat that there are important qualitative factors to consider when choosing one option over the other. For example, if you’re more likely to lose sleep at night worrying about your mortgage payments increasing, you should go with a fixed rate. If you’ll lose sleep worrying about paying too much interest, a variable rate is probably the way to go. Simply put, you can’t put a price on peace of mind.

That said, there are many borrowers who are willing to live with some interest-rate uncertainty if they think that it will save them money over the next several years. It is to this group that I offer my take on how a fixed/variable break-even might unfold over the next five years.

Let’s start with the key assumptions that I used to underpin my forecast:

Using these assumptions, my variable-rate forecast has our GDP and inflation rates moving in line with BoC Governor Poloz’s most recent estimates. This would see the Bank starting to raise its overnight rate by 0.25% in March of 2016 and then by another 0.25% in May of 2016. Once that happens, I assume that the BoC will allow some time for our economy to absorb the impact of these rate increases before tightening further.

In my latest forecast, the next round of overnight rate increases would occur in March and May of 2017, doubling the overnight rate from today’s levels. While a cumulative 1.00% increase in the overnight rate might not sound too severe, remember that Governor Poloz and others, like CIBC economist Benjamin Tal, have postulated that our record household debt levels make us much more sensitive to rate hikes. As such, it should take fewer rate increases than it has in the past for the BoC to achieve its desired level of economic tightening.

Speculating about future overnight rate increases becomes more difficult as we project further into the future, so using nothing more than a guess, I then assume that the BoC will tighten four more times in April, June, August and October of 2018. Perhaps by that point we will see the culmination of Governor Poloz’s hoped for export-led recovery and the accompanying rise in business investment that he believes is so critical to healthy Canadian economic growth.

The chart below shows the impact that these overnight-rate increases would have on a variable rate starting at 2.35% today: 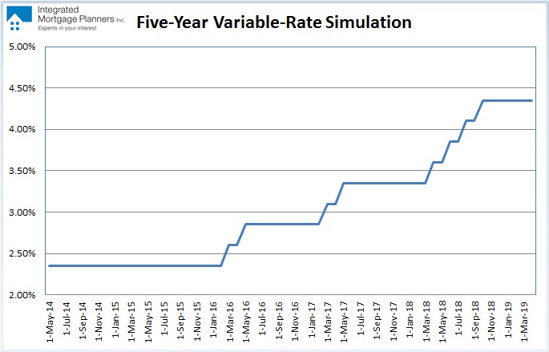 Now let’s use this rate forecast to compare the fixed versus variable costs of a $300,000 five-year mortgage amortized over 25 years:

Let’s add a final wrinkle, which my regular readers will recognize, because I always include this advice when running simulations.

Variable-rate borrowers increase their odds of coming out ahead when they bank the savings they can realize today by setting their monthly payment as if they had actually chosen today’s five-year fixed rate of 2.99% instead. In this case, that would mean adding a discretionary payment of $96/month, to raise  the initial monthly variable-rate payment of $1,322 to the monthly fixed-rate payment of $1,418 that they would have paid if they had chosen a fixed rate. (Once a variable-rate borrower sets up this extra payment, the lender can put a note on file so that it is taken automatically for as long as you leave the instruction in place, meaning that you don’t have to call every month to keep this arrangement going. And if you choose, you can stop this additional payment at any time.)

This strategy has other advantages as well. It gets you used to paying a higher rate (2.99% instead of 2.35%) so that if your variable rate rises, you simply adjust the $96 discretionary payment down so that your total monthly payment remains at $1,418 until your variable rate rises above 2.99%. In the meantime, you pay off your mortgage more quickly and increase the odds that you will have a lower mortgage balance at renewal, even if your rate rises abruptly in the latter part of your term.

Here is the comparison chart, including the results of this make-hay-while-the-sun-shines approach for variable-rate borrowers:

A borrower with the mortgage outlined above who uses this approach would save a total of $3,651 over the first five years, and these savings will continue to grow over the remaining life of the mortgage because the balance at renewal is several thousand dollars lower.

The key assumption in this latest variable-rate simulation is that the BoC will not start raising its overnight rate in the next two years. If I am right about that, variable-rate borrowers will build up a savings buffer over that period which will significantly limit their potential for incurring higher overall borrowing costs over the remaining years of their mortgage.

Five-year variable-rate mortgages are offered at rates in the prime minus 0.65% range, which works out to 2.35% using today’s prime rate of 3.00%.

The Bottom Line: The narrowing spread between fixed and variable rates makes deciding between them a tougher call. When both are at ultra-low levels, the potential for saving either way shrinks. For variable-rate borrowers who choose not to make additional discretionary payments, any net benefit could well be reduced to the cost of a fancy dinner or two. The only remaining question is whether it is you or your lender who is picking up the tab.