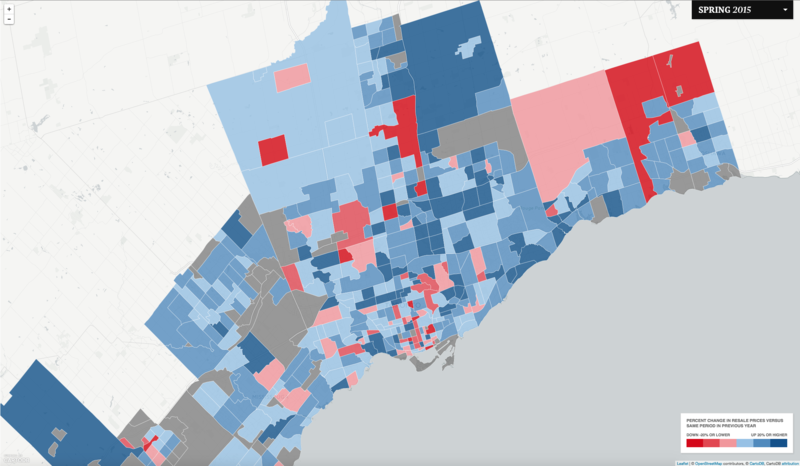 How much is your home by neighbourhood across Toronto & the GTA?

The semiannual Globe and Mail Home Value Survey powered by Realosophy is out today! Go to the interactive map to see how your neighbourhood has performed.

Since 2008, we've been crunching the numbers to show you how residential real estate sale prices have been doing at the level that matters the most - the neighbourhood.

New and for the first time, we're providing statistics for neighbourhoods throughout the Greater Toronto Area (GTA). And in a city whose media too often compare a small Toronto neighbourhood like Leslieville, to a say, all of Mississauga, this marks a key, and frankly overdue, shift.

The fact that we now refer to the neighbourhood of Streetsville rather than the municipality it falls in reflects the "neighbourhoodification" that we have seen across Toronto over the past decade as previously unheard of corners are named and placed not only on Google, but in our mental maps.

In an era when a condo marketing slogan seems to "make a neighbourhood so," some may understandably lament the commodification of the neighbourhood, but this overlooks an undeniable tension at the heart of human society. We struggle to define ourselves as individuals with the right to live, love and work uniquely, but we huddle reflexively. A city of diverse, even sharply contrasting and at times dubiously defined, neighbourhoods may be the best-possible container for this paradox. That it brings with it a tendency to consume a place as we might a new diet and that some go hungry, is something to think about. Not too long ago in Canada who you were restricted where you could live; today the restriction is largely money.

In reality, most of us live somewhere in between the rhetoric of gentrification and the commune.

And while the cultural distance between a revitalized urban space like Artscape and its prominently marked "gender neutral" bathrooms and the ethnic enclaves of Brampton and Markham is great, there is a segment of Toronto, and not an insubstantial one, that has travelled these distances, and continues to, often many times a day (and we're not just talking real estate agents).

Whether we're in our cars on the DVP or switching from a conversation with a co-worker to one with a family member, it's a wonder how far we travel.