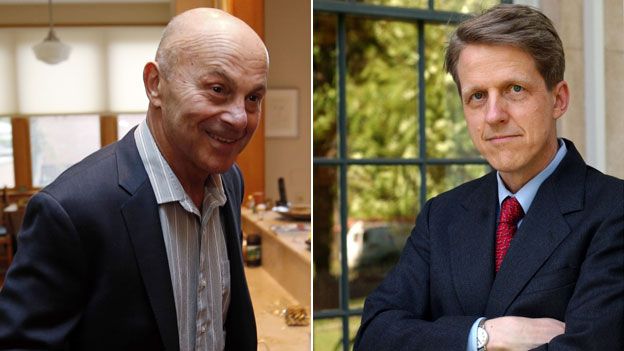 Bubbles are always easy to call after the fact, but things are far less clear when you’re in one.

The fact that leading economists can’t even agree on whether real estate bubbles exist makes things even more challenging for the average home buyer who’s trying to make sense of the market.

The two competing views on real estate bubbles are by Nobel Laureates Eugene Fama and Robert Shiller – who somewhat ironically won the Nobel Prize for economics in the same year.

What exactly is a bubble? Robert Shiller defines it as follows:

A situation in which news of price increases spurs investor enthusiasm which spreads by psychological contagion from person to person, in the process amplifying stories that might justify the price increase and bringing in a larger and larger class of investors, who, despite doubts about the real value of the investment, are drawn to it partly through envy of others’ successes and partly through a gambler’s excitement.

Not too long ago, economic theory was rooted in the basic assumption that people make rational decisions. Shiller among others began questioning this assumption by asking what role psychology plays in our decision making. He believes that cognitive biases can prevent people from making rational decisions. For example, word of mouth stories from one’s friends about their success investing in real estate coupled with optimistic news stories about real estate might move someone from a real estate skeptic to an advocate. And not because of any thorough analysis of the market but rather because they too want to experience the same success their friends have.

When too many people begin to buy into this overly optimistic view of real estate and begin buying real estate because primarily they believe it’s going to be worth more in the future then we start approaching a bubble like environment were people’s decisions are driven more by their irrational biases and expectations rather than by the true value of the asset.

Eugene Fama takes a different approach. Fama does not believe in bubbles, he believes that the price for a particular asset reflects all available information. In a New Yorker interview Fama says:

It’s easy to say prices went down, it must have been a bubble, after the fact. I think most bubbles are twenty-twenty hindsight. Now after the fact you always find people who said before the fact that prices are too high. People are always saying that prices are too high. When they turn out to be right, we anoint them. When they turn out to be wrong, we ignore them. They are typically right and wrong about half the time.

Fama’s view is that people are making an investment today based on all the information that’s available to them and their opinion of where the market is heading in the future. If all home buyers believed house prices were going to crash next year – they of course wouldn’t buy. The fact that prices did fall in the US was something that nobody could have predicted – much like how nobody can predict when the stock market is going to crash.

While my personal view of housing markets is more in line with Shiller’s, I think Fama’s argument will resonate with anyone who lives in and closely follows Toronto’s real estate market.

In 2011 I was contacted by several firms in New York that were convinced Toronto’s condo market was going to crash and were trying to find ways to profit from what they felt was an inevitable event.

And yet, the crash has yet to happen. Toronto’s house prices keep going up and Toronto’s condo market is more competitive today than it was in 2011.

But do all these failed bubble predictions mean that bubbles don’t exist or does it mean that the people making those predictions were bad real estate economists. Is it a coincidence that Robert Shiller predicted both the dot com tech bubble and the US housing bubble before they crashed?

I believe that real estate bubbles can exist and because bubbles are largely a social and psychological phenomenon – rather than an economic one – I also believe that brokers, home buyers and home sellers are actually in a unique position to see these changes in consumer mindset happen in real time. This recent Globe and Mail report about the high rate of assignments in Vancouver’s housing market is a great example of this.

The article describes how real estate brokers and home buyers are flipping paper contracts for homes to multiple other buyers in a short period time for progressively higher prices. This type of behaviour is a hallmark of a speculative and bubble like market and is something that anyone actively buying or selling in Vancouver likely knew about before reading it in the Globe and Mail – but is likely absent from most economist’s forecasts and economic models of Vancouver’s housing market.

Our ability to see and be concerned by such speculative behaviour assumes that we ourselves are not caught up in the speculative frenzy and can look at the market objectively from the sidelines, which I admit is a big assumption.

That being said, I still believe there is a great deal of value for home buyers to understand what economists like Robert Shiller are looking for when trying to determine if a real estate bubble exists – that way we too can look for these trends in our own cities.