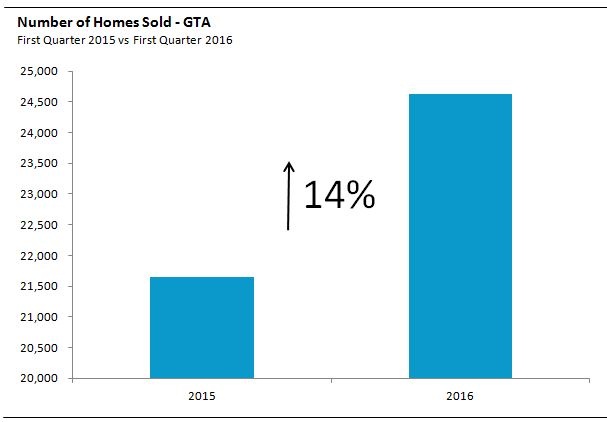 If you're a buyer looking for a home in Toronto right now, you probably know first hand how competitive the market is.  You are probably used to hearing about homes receiving 20-30 offers on their offer night.

While stories of homes receiving multiple offers is not uncommon for Toronto, the first three months of 2016 have been exceptionally competitive when compared to previous years.  What's driving the intense competition for houses in Toronto?

A widening imbalance between the demand for homes and the supply of homes coming on the market for sale both through the resale and new construction markets is making what was an already hot real estate market in 2015 even hotter in 2016.

Sales are up 14% during the first three months of 2016 compared to 2015 showing a strong increase in the demand for homes.

New listings on the other hand are actually down 2% during the first three months of 2016. 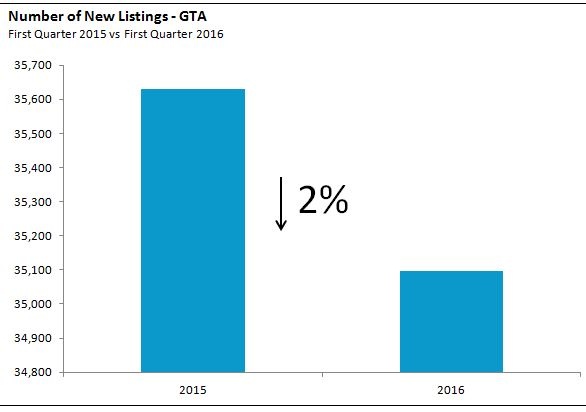 Converting this into real life numbers, during the first three months of 2016 we saw 3,000 more buyers buy a home compared to last year and they had 500 fewer houses to choose from (compared to 2015).

This steep increase in sales and declining new inventory is what's driving the imbalance between the demand and supply for homes in Toronto.

We can see from the chart below that Toronto's average months of inventory was just under three months in early 2013 and has been on the decline since then.

The imbalance between supply and demand has gradually been getting worse (for buyers) over the past few years. The problem with falling inventory is that as the supply of homes declines house prices begin to rise at a much faster rate.  Back in 2013 when Toronto's real estate market had roughly 3 months of inventory, house prices were appreciating at roughly 5% per year.  For the first three months of 2016, average home prices have been up between 12%-15% for each month.

The chart below shows this relationship between falling inventory and rising house prices. 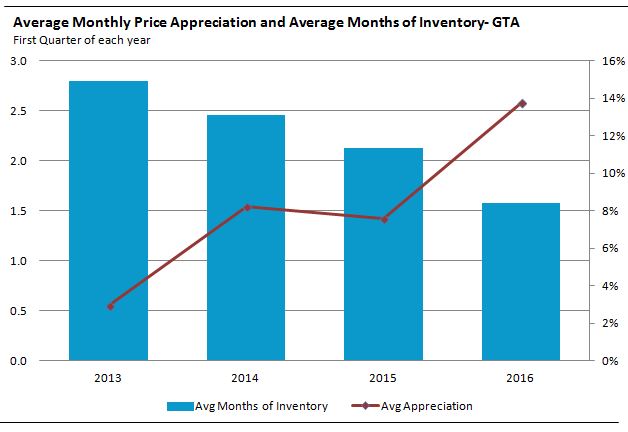 So what is driving this imbalance between supply and demand?

That's a tricky question with a lot of different opinions to go around.  The mainstream press, along with CMHC, have primarily focused on blaming this imbalance on a theory that foreign buyers - non-residents in particular - are driving up home prices. The theory is that foreign buyers are purchasing homes in Toronto either as an investment or for their children to live in while they're at university in Toronto which is artificially driving up demand.  While foreign buyers certainly might have a small impact on house prices in Toronto, I don't believe it's the driving force in the same way it might be in Vancouver where it's estimated that roughly one-third of buyers are foreign.

An alternative explanation which is rarely heard in Toronto is that the blame for Toronto's housing affordability problem has nothing to do with the demand for homes but rather the lack of supply.  The Greater Toronto Area is not building enough homes to meet the demand from home buyers and the blame for this shortage of inventory falls on the politicians and planners, both provincial and municipal, and the land use restrictions they have in place that are restricting the supply of homes being built.   Nobel prize winning economist Paul Krugman shared a similar view about New York's real estate market.

The downside with Krugman's supply side argument for Toronto is that it can't provide home buyers any short term relief.  It takes years for planning policies to change and years for new developments to be planned, sold and built. Planners should have anticipated and planned for Toronto's housing shortage a decade ago.

What's most troubling is that there's very little discussion from politicians and planners - at least publicly - about Toronto's housing shortage and there are no signs of a plan to deal with this problem.

Sign up for my talk here or below where I’ll walk through what data is telling us about Toronto's real estate market and will share some examples of how buyers can avoid making preventable mistakes.

Signs that the market is still moving quickly, but not as out-of-control as it was months ago.
Read More
Safe Investments

The Toronto area market is still competitive and favouring sellers - but things are cooling down.
Read More
Market | Toronto and GTA

When thinking about what might trigger a decline in home prices, there are generally two broad...
Read More