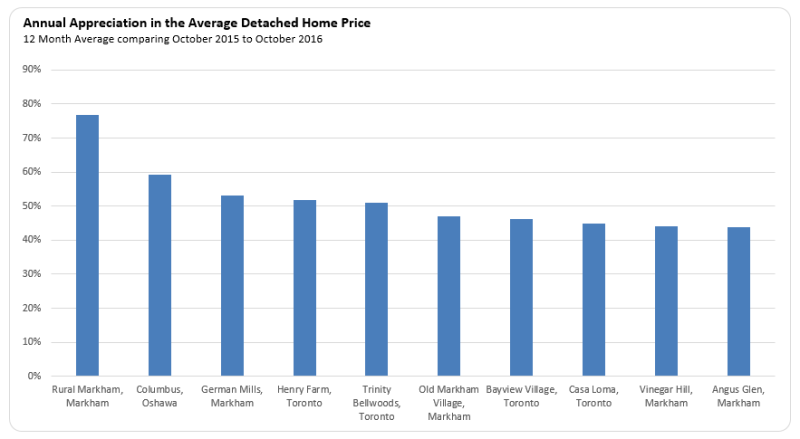 Home Prices Up Over 50% In GTA’s Hottest Neighbourhoods

Earlier this month the Toronto Real Estate Board announced that the average price of a detached home in the 905 region was up 29.4% year over year. But as any good math student knows, if the average in the GTA is up 29.4% that means there must be quite a few neighbourhoods that are appreciating at a much faster rate than this.

I thought it would be helpful to take a look at how fast the hottest neighbourhoods in the GTA are actually appreciating.

The chart below shows the top ten neighbourhoods ranked by the percent increase in their average sale price from October 2015 to October 2016.

Five out of the top ten neighbourhoods are in Markham, four are in Toronto and one is in Oshawa.

The chart below shows the actual change in average price from one year to the next. 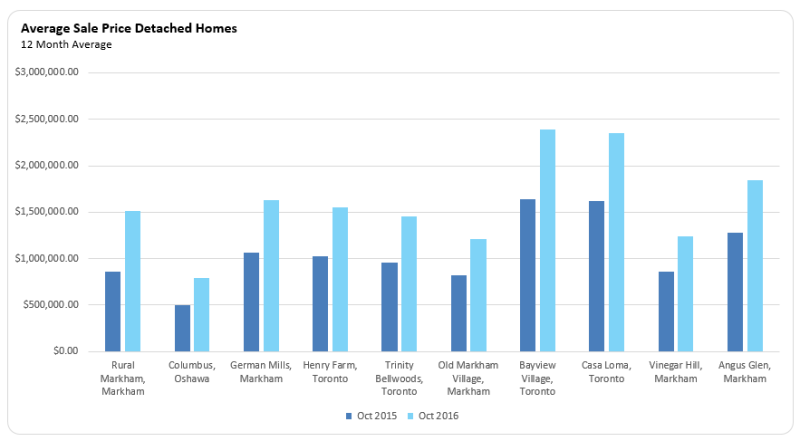 Nine out of the ten neighoburhoods have an average price that is above $1.2M for October 2016.

This last chart shows the percent of detached homes that sold for more than the seller’s asking prince in 2015 vs 2016. 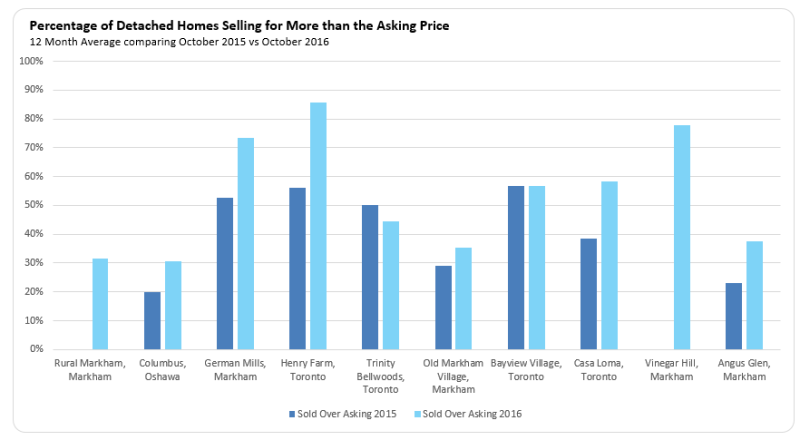 Eight out of the ten neighbourhoods saw a big increase in the percent of homes selling for over asking in 2016.

As I wrote a couple of months ago, things are very different with Toronto’s real estate market this year. This is not the normal competitive Toronto real estate market we’ve been hearing about for ten years where prices were increasing 6%-10% annually.

When we see average prices up 30% year over year, there is cause for real concern. One would think that this would motivate Ontario’s liberal government to wake up and listen to all the real estate brokers who see a significant amount of foreign speculation behind Toronto’s real estate market – but it unfortunately hasn’t. Kathleen Wynne’s Liberal government has indicated that they do not want to introduce a tax on foreign buyers – similar to the one introduced in Vancouver and to the one recently increased in Hong Kong – to curb foreign speculation.

What's worse, the Liberal government has instead decided to take advantage of this demand from foreign buyers by increasing the provincial land transfer tax on luxury properties.

The Wynne government’s indifference regarding Toronto’s out of control house prices and lack of affordability for people who live and work in the GTA is troubling. I can only hope they reconsider their position and take proactive measures to mitigate the impact that foreign speculation is having on Toronto’s real estate market.