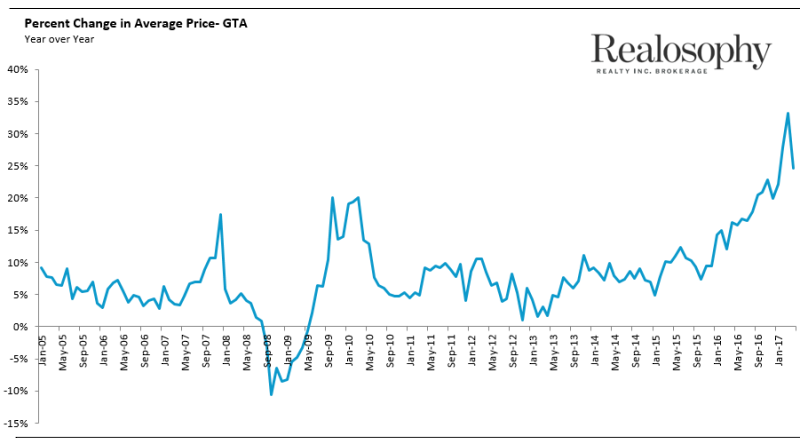 The first half of 2017 has been a roller coaster ride for Toronto’s real estate market.

The first 3 months of the year were the most competitive I have ever seen in the GTA. The market was competitive not just because of the nigh number of offers houses were getting on their offer night, we’re accustomed to seeing houses get 10+ offers early in the season, but because of the aggressive prices home buyers were paying to win on offer night. It was not uncommon to see the winning buyers spending 10-20% more than a home was objectively worth.

This pushed home prices up 33% in March compared to the same month in 2016.

Home buyers were seeing house prices appreciating 20+% every month and felt that if they don’t buy a house now, they’re never going to be able to afford one. That was the mood of the market. One driven by a real sense of urgency resulting in panic buying.

Then something interesting happened. Towards the end of March the market started to cool down a bit. This was mainly driven by a huge surge in the number of new listings that had come on the market for sale. During the third week of March we saw 3,034 new freehold properties come on the market which was 1,158 more homes than the previous week and a 51% increase over the same week in the previous year. The following week new listings were up 45% then again by 62% the week after that. 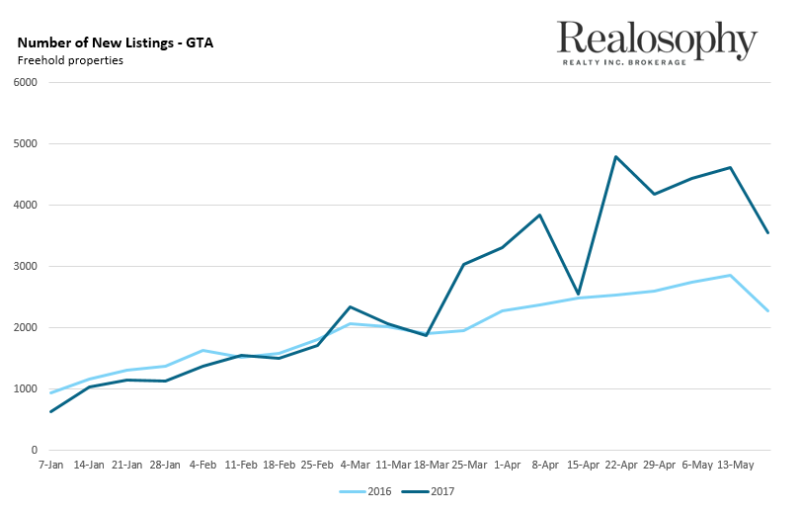 What was behind this increase in the number of listings?

Many people in the industry I talked to believed that the surge in listings in late March was the result of home owners rushing to get their home on the market before the province announced policy changes in late April that many people believed would cool Toronto’s real estate market. Some of these sellers were planning on selling later in the season but moved up their listing date to sell before the provincial changes while others were trying to time the market by selling at what they felt was the peak.

Given the fact that new listings are still up significantly during the four weeks after the provincial government announced their Fair Housing Plan on April 20th aimed at cooling the market, I suspect many homeowners are feeling that the market may have peaked and it’s time to cash out.

But the cooling we’ve been seeing in Toronto’s real estate market is not just about a surge in new listings. We are seeing a significant decline in the demand for homes as home buyers appear to be taking a wait and see approach to the market. The chart below shows the number of sales by week this year and last year. 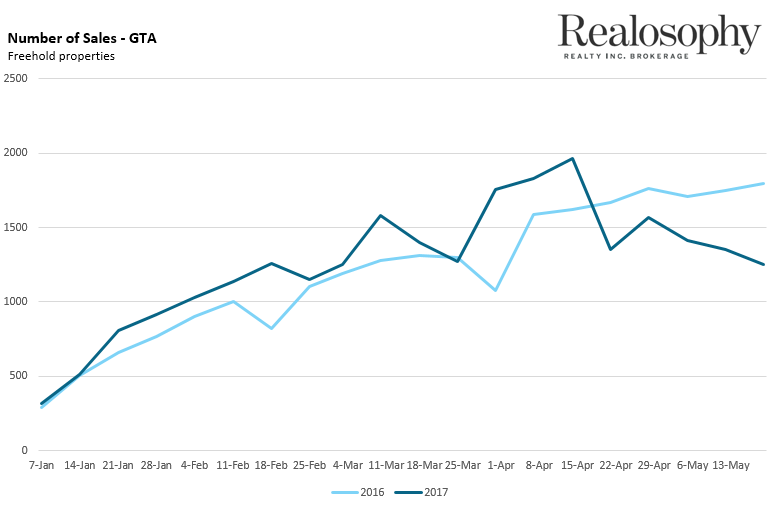 Sales have been down every week since the third week of April, the same week the province announced their Fair Housing Plan. But sales are not only down on a year over year basis, they are declining week over week as well. This is unusual because sales don’t typically decline at such a fast rate from one week to the next in May – traditionally one of the peak sales months of the year.

The combination of the increase in the number of new listings with the decline in demand has completely altered the dynamics of the GTA's real estate market.

In the span of four weeks we went from a market driven by panic buying where houses were getting 20+ offers on their offer night to a market where the majority of homes no longer have offer nights, many houses are sitting on the market for weeks and buyers are now making low-ball offers on homes. An unbelievable shift in such a short period of time.

In my next post, I’ll explore some possible factors that might be behind the decline we are seeing in the demand for houses.