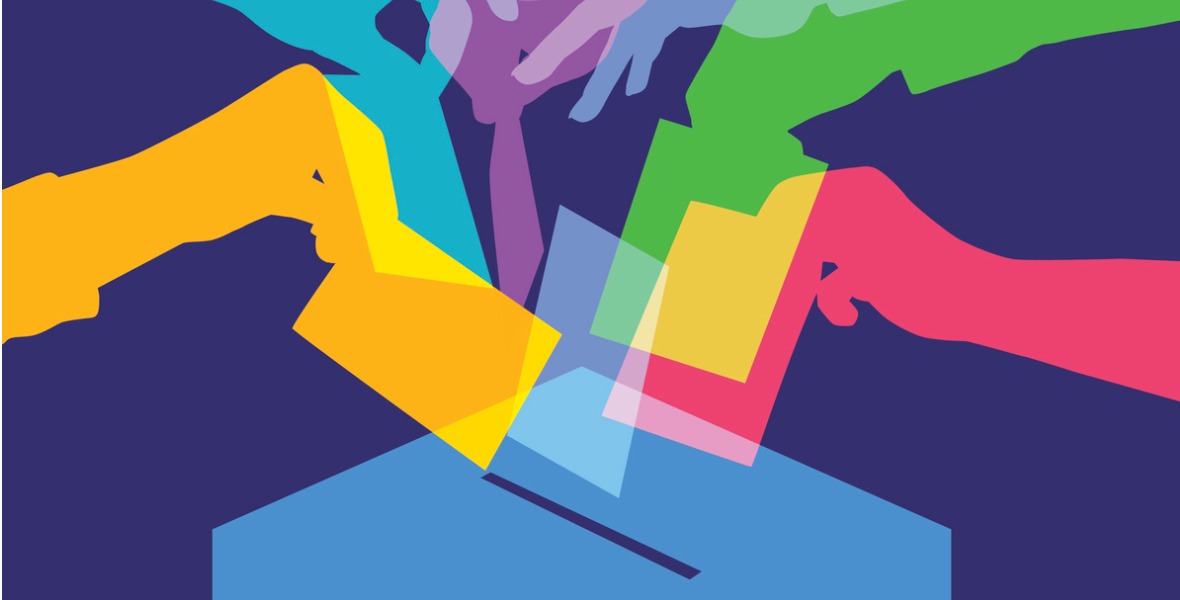 Of the many measures being put forward, which proposals will actually help Canadians with housing affordability?

The Bank of Canada (BoC) held its policy rate steady last Wednesday and, as expected, refrained from materially altering its forward guidance in deference to our current federal election.

Because the Bank effectively stood pat last week, in this week’s post I will offer my assessments of the mortgage-specific proposals being put forth by our three main political parties.

Let’s start with a summary of what each party has put forward, with the courtesy of Move Smartly’s editor Urmi Desai: 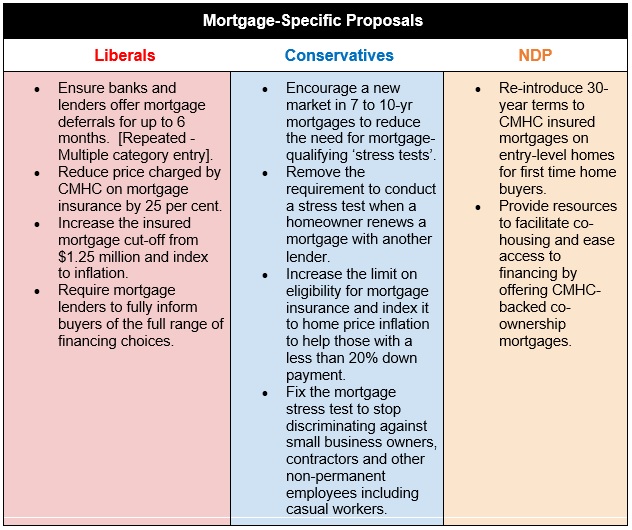 Now here is my take on each proposal, broken down by party:

This might sound good to at-risk borrowers, but it would be a nightmare for lenders.

Borrowers are contractually bound to make timely mortgage payments, and if they can use a job loss or a vaguely worded “major life event” to stop paying their mortgage, arrears rates, which are currently minuscule, will spike.

If that happens, investors will lose confidence in mortgage-backed securities and demand significant risk-premiums, which lenders will quickly pass on to borrowers in the form of higher rates. And that’s higher rates for all borrowers, not just the ones who aren’t making their payments.

Verdict: Disaster in the making.

A reduction in mortgage-insurance premiums might sound good to a buyer who needs to pay that fee, but it would only help affordability over the very short term. In today’s red-hot housing markets, lower borrowing costs will quickly flow through to higher prices.

Also, if the government reduces CMHC mortgage-insurance premiums by 25 per cent, the two private default insurers, Sagen (formerly Genworth) and Canada Guaranty, would be forced to match that price drop. In other words, our government would be dictating pricing to the market (which should concern everyone).

Verdict: Disaster in the making.

This change would ostensibly be made in recognition of the fact that the current insured-mortgage cut- off of $1 million is covering a smaller and smaller percentage of the overall market (thanks to rapid house-price appreciation). But all it would do is stoke more demand and thereby exacerbate the real problem, which is supply.

This policy sounds very pro-consumer but, with no specifics, what does it really mean?

If our government is concerned about informing buyers, it should start by better regulating and monitoring the sales divisions at our banks (which account for most mortgage transactions).

Today, anyone wanting to work as an independent mortgage agent or broker must complete extensive course work and pass exams. Once licensed, they must then complete ongoing training. Conversely, bank mortgage specialists are given minimal training and have no specific licensing requirements.

Ensuring that consumers are better informed about the full gamut of mortgage options requires actionable policy, not vaguely worded promises.

The Canadian mortgage-securitization market is heavily geared toward five-year terms, so it’s not clear how the conservatives would “encourage” this evolution in our financial markets (and I can think of a lot of bad ways they might try).

On the other hand, borrowers would be much more easily encouraged if we reduced or eliminated the stress test used to qualify for longer terms. This would also make some sense, because the stress test was designed to guard against the risk that a borrower’s rate would rise materially higher at renewal – and longer terms naturally reduce that risk.

Every party should support this initiative.

Today, borrowers who renew with their current lender don’t have to pass the stress test, but if they find a better deal elsewhere and want to switch, they do.

This policy entraps the weakest subset of renewing borrowers with their current lender, and it should come as no surprise that lenders are identifying these borrowers and offering them less competitive rates. Policies like this help explain how our financial-services sector earns a disproportionate percentage of its profit on the backs of our most tightly stretched consumers.

I can understand why the major banks (our largest incumbent lenders) lobbied for this policy, but I can’t understand why any government would support it.

This proposal is like the one made by the Liberals to raise the price cut-off for mortgage insurance eligibility. It would allow borrowers with smaller down payments to buy more expensive houses, thereby stoking demand while also increasing taxpayer exposure to our hottest housing markets.

The mortgage stress-test does not discriminate against these groups.

It is harder for workers with inconsistent and/or variable incomes to secure mortgage financing because their incomes make them less reliable credit risks for lenders. Any stress test “fix” for this sub-group of borrowers wouldn’t change that incontrovertible fact.

Verdict: A statement full of sound and fury (that signifies nothing).

Extending amortizations on insured mortgage would increase affordability … for about an hour on the morning after the change is implemented.

The last thing we need at a time when five people are showing up on offer night to buy one house is to increase their capacity to pay even more.

A few years ago, I advocated for this change, and at some point a long time from now when we have too much supply and not enough demand, it will have merit. But not now.

Expanding co-housing options and making co-ownership mortgages more widely available should increase access to housing for lower-income groups. I’m all for both. The challenge will be in the details, because, as always, the proof of the pudding is in the eating.

Verdict: One to grow on.

Our housing affordability crisis boils down to one simple fact. Right now, we have much more demand than supply.

Against that backdrop, it is disappointing that almost all the mortgage-related proposals being made by our three main parties will only stoke more demand.

Bluntly put, one the main reasons we have a housing shortage is that our federal, provincial and municipal levels of government aren’t aligned on how to reduce and/or eliminate obstructive regulations. But wrestling through the types of long-term fixes isn’t sexy and doesn’t fit easily into a bullet point on a campaign pamphlet.

Regardless, if our next federal government is serious about addressing our housing crisis, it should start there.

We can also look to other countries, such as Chile, which have developed successful models for expanding access to housing to lower income groups and which have blazed a path that we can follow.

Here’s hoping that our next government trades its gas can for streamlined regulations and some best-in-class policy reports instead.

The BoC decided not to turn more dovish last week, as I argued it should in last week’s post, but I expect that it will do so at its next meeting in October, once the federal election is behind us.

In the meantime, with COVID infection rates rising and our high-level economic data weakening, I expect our mortgage rates to remain at their current levels or fall further over the short term.