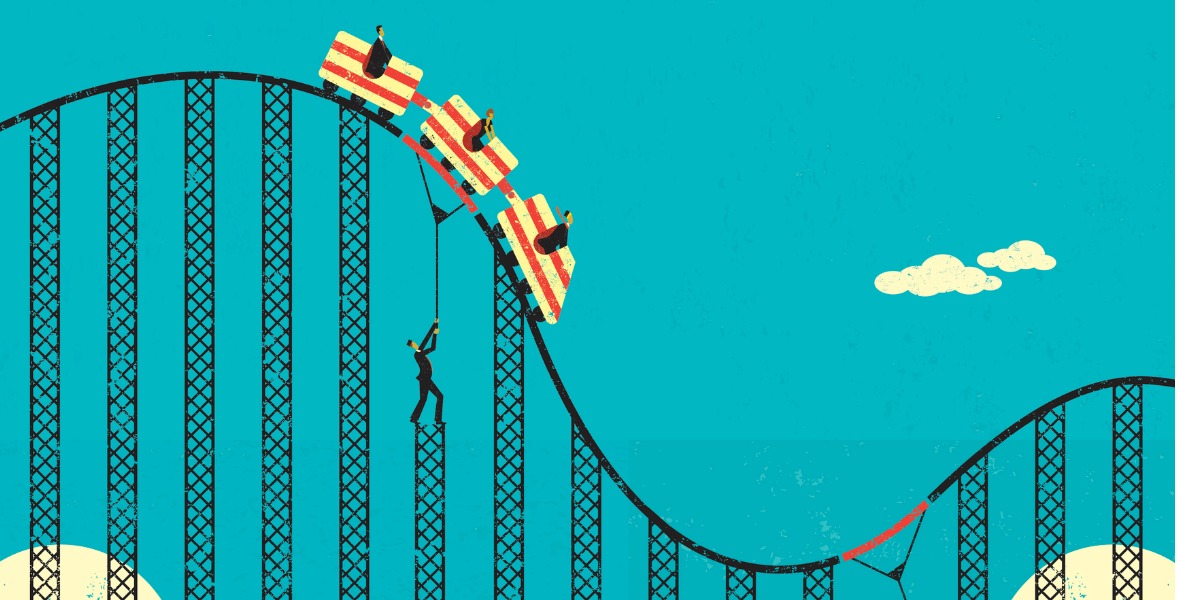 The Bank of Canada Finally Cuts and Mortgage Rates Plummet

Global economic shocks have led to unforeseen drops in mortgage interest rates - so what should borrowers do going forward?

Last week, greed left town and fear took centre stage as concerns about the scope of the coronavirus economic impact and the resiliency of the global economy intensified.

Stock markets, bond yields and mortgage rates plummeted to a degree not seen since the Great Recession. Back then, drops of this magnitude unfolded over many weeks. This time it took only one.

In today’s post I will describe the crazy week that was and offer my take on the implications for both our fixed and variable mortgage rates going forward.

I started last week wondering if the Bank of Canada (BoC ) would finally drop its policy rate for the first time since 2015. (Mea culpa: In last week’s post, I speculated that the BoC would hold off a little longer.)

The Fed’s decision to move before its next meeting, which was only two weeks away, caught financial markets off guard, and not in a good way. Instead of igniting their animal spirits, it spooked investors. They viewed the move as an “emergency” cut and worried about why the Fed was suddenly in such a hurry. It also didn’t help that the last two series of Fed intermeeting cuts happened in 2001 and 2008 and that in both cases, a recession followed shortly thereafter.

The market’s reaction was breathtaking,

In addition to the Fed’s cut last week, the bond futures market is now pricing in a 70% probability that the Fed will lower its policy rate by another 0.50% on March 18 and 50% odds that it will cut by another 0.25% when it next meets on April 29. That would bring the Fed’s policy rate down to a range of .25% to .50% before the snow melts in Edmonton.

Each additional cut brings the Fed’s policy rate closer to 0%, and beyond that point only unconventional and experimental monetary-policy tools remain. That quite understandably makes investors nervous.

Most observers still don’t think the 10-year U.S. bond yield will go negative, but it’s worth remembering that it has declined by an average of 1.00% during modern-day recessions. Also, while yields this low are new to North America, this is not so when compared to most other G10 countries (see chart below). 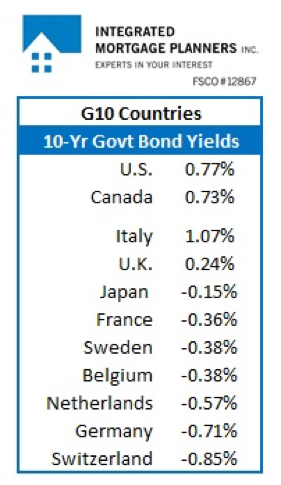 On Wednesday it was the BoC’s turn.

BoC Governor Poloz confirmed that the Bank was already leaning toward a cut before Tuesday, but the Fed’s emergency move left it no choice. Imagine how high the Loonie would have soared (to the extreme detriment of our exporters) if the Bank had stood pat.

Here are the highlights from the BoC’s accompanying statement:

The BoC’s overriding message was that conditions are deteriorating and that it stands ready to do more if needed. (Note: That was before Saturday, when Saudi Arabia announced that it would slash its oil prices to punish Russia for not matching OPEC’s proposed production cuts in response to slowing global growth. Since that announcement, international benchmark Brent crude futures have plummeted 30% to $32.05 per barrel and U.S. West Texas Intermediate crude futures have dropped 27% to $30.07 per barrel - another big hit for Canadian exports.)

Against that backdrop, here is what happened to our mortgage rates last week, along with my take on where they are likely headed next.

Variable-rate mortgage borrowers saw their first rate drop in almost five years, and at 0.50%, it was a big one.

There was no guarantee that lenders would pass on the BoC’s full 0.50% cut. When the BoC last cut its policy rate, by 0.25% during the oil-price crash in 2015, lenders only passed on variable-rate discounts of 0.15%.

The futures market is now also pricing in about 65% odds that the BoC will cut by another 0.25% at its next meeting on April 15. Those odds will increase further if the Fed lowers again when it meets on March 18, which is also expected. Exchange-rate ramifications aside, recent U.S. economic data have been stronger than recent Canadian economic data.

Variable mortgage rates have been priced at a premium for some time now, but the BoC’s big cut actually leaves them a little lower than their fixed-rate equivalents. If fixed rates hold relatively steady and the BoC cuts again at its next meeting, variable rates will once again become an increasing viable option.

That said, choosing a variable-rate mortgage is still nowhere near the no-brainer it once was.

Any potential saving versus fixed-rate options are still small by historical comparisons, and these targeted rate cuts could prove more temporary than most.

Consider what happened after the BoC dropped its policy rate by a total of 0.50% in 2015 in response to the oil-price crash. When the Bank determined that our economy had largely recovered from the negative impacts of that crisis, it reversed those cuts by raising its policy rate by 0.25% about two years later, in July and September of 2017.

Most experts predict that we will have a coronavirus vaccine within a range of 12 to 18 months, and it might not even take a vaccine to turn things around. Even a sharp drop in infection rates might be enough to restore confidence and get the global economy moving again.

The Government of Canada (GoC) five-year bond yield, which our five-year fixed mortgage rates are priced on, plummeted from 1.07% to 0.68%.

Lenders were already cutting their fixed rates in the lead up to the BoC’s meeting on Wednesday, and additional rate drops followed after that. At this point, anyone with an existing fixed-rate mortgage approval should expect to see their previously approved rate drop by around 0.30% in the coming days.

There is one thing I can say with certainty.

If you are locking in a five-year fixed rate today, it would be unwise to sign a mortgage contract that includes an exorbitant penalty to break it (as many contracts do). Having the flexibility to prepay your mortgage at a fair cost and to refinance at a lower rate in less than five years will be invaluable if rates drop materially from now. (Check out this post for a detailed example of why I write that.) And make no mistake. There is plenty of room for them to go lower. Negative interest-rate mortgages already exist.

Note for next week: Now that variable mortgage rates are no longer punitively high relative to their fixed rate equivalents, it’s time to revisit the age-old fixed vs. variable debate. To that end, in next week’s post, I’ll run three simulations that compare these two options. (Here is one of my past posts on the topic if you would like a preview.)

The Bottom Line: The BoC dropped its policy rate by 0.50% last week and five-year variable mortgage rates fell by the same amount. The futures market is betting that the Bank will cut by another 0.25% in the near future.

GoC bond yields also plunged last week, as did the fixed mortgage rates that are priced on them. GoC bond-yields are already close to all-time lows and appeared priced for a worst-case scenario, but then Saudi Arabia started an oil-price war. At this point, all bets are off.

Last week reminded me that the Chinese proverb “May you live in interesting times” was meant as a curse instead of a blessing. Interesting times indeed.