When economists see a significant and sustained deviation from recent trends in data, they try to find the factor(s) that may have contributed to this shift.  For example, the Toronto real estate market experienced a very sudden and sustained increase in the number of homes sold last year.  Most economists attributed this increase in demand to the introduction of 40 year mortgages which suddenly made home buying more affordable.

Toronto's real estate market experienced another significant and sustained deviation from recent trends, this one beginning in April 2008.  The chart below shows the number of new listings (homes) available for sale through the Toronto Real Estate Board for each month since 2006.  New listings should not be confused with total inventory or active listings which I talked about last week.  Total inventory refers to the total number of houses available for sale in any given time period.  New listings refers to the number of new houses that came on the market in a particular time period.

Note that the number of new listings for each month in 2007 was quite similar and moved in relative unison with the volume in 2006. 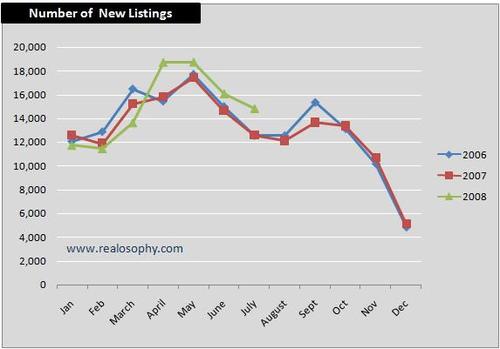 New listing volumes for the first three months in 2008 (green line) started out lower than both previous years, in part due to Toronto's heavy snowfall this year, but in April 2008 the number of new listings surged by 37% over the previous month and was 18% higher than the volume for April 2007. For each of the past four months the number of new listings on the market have been anywhere from 8% to 18% higher than the previous year.

How do we explain the sudden and sustained increase in the supply of new listings coming on the market?

This year Canadian MP and author Garth Turner released his cautionary outlook for Canada's real estate market titled Greater Fool.  Garth Turner warns Canadians that Canada is poised for a housing crash similar to the one taking place in the US.  Turner advises Canadians to sell their house now and rent if their home makes up more than a third of their total net worth.

The book was released in March 2008.  The following month the number of new listings on the market jumped by 37%.  Did thousands of people in Toronto heed Turner's advice to sell their house?

Turner's influential book and blog may have played some part in the rise in April's new listing volume but the heavy snowfall from January to March also played a roll. Many sellers held off on listing their house during the winter months because the heavy snowfall made it difficult for buyers to look for houses.

While the harsh winter may help explain the rise in April's new listings how do we explain the sustained increase in new listings from May to July? Is this short term trend an indication that more sellers are looking to "cash out" at what they perceive to be the peak of Toronto's real estate market?

Perhaps, but part of the increase in new listings may be explained by the many price changes we are seeing in Toronto's real estate market.  When a realtor wants to change the price for their listing at 123 Main Street for example, they can either update the listing for that home with the new price or they can take 123 Main Street off of the market and then upload a new listing for 123 Main Street at the new price.  The advantage of the later approach is it resets the Days on Market for the house back to 0 making the listing look newer than it really is.  One of the problems with this is that both listings would be counted as new listings because they would have different MLS numbers.

Some agents actually use this price changing strategy as part of their marketing plan for selling homes in a slowing market.  The agent will list the house at a high price and if the house does not receive an offer within 10-14 days the agent will take the house off of the market and will relist it at a lower price.  Even if the agent and seller don't want to reduce the price for the home, the agent will still take the house off of the market if it doesn't sell after 10-14 days and will relist it at the exact same price in order to reset the Days on Market.  The agent will continue to relist the property every couple of weeks until it sells. It's not uncommon to see the same house listed up to 4 separate times by the same agent.  In this case TREB's data would show 4 new listings when there should have been just 1.

This strategy to relist properties in order to reset the Days on Market is not new but has probably been occurring more often now than in previous years given the slowdown in Toronto's real estate market.

Due to the limited data available it's tough for anyone to say conclusively what's driving the increase in new listings but I suspect that it's a combination of the factors outlined above which are all signs of a slowing market.  I'll be keeping an eye on this data to see if this trend continues into the fall or if new listings return to 2006/2007 levels.