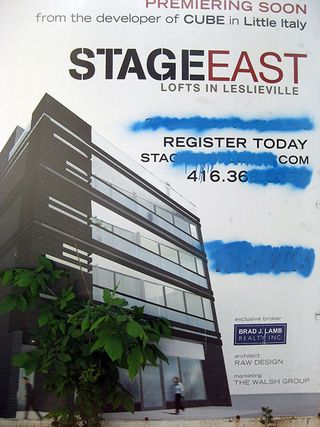 Leslieville News: What's Up With The Stage East Lofts?

Here's another question we've been getting from many residents: "What's going on with the Stage East Lofts Site?"

For what seems like years, the site has sat untouched, still proudly proclaiming that they "Now Install Quality New and Used Tires." 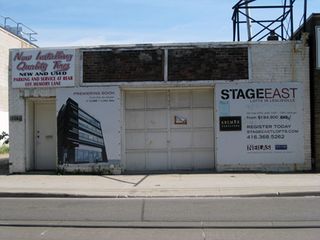 While it's great to have a neighbourhood spot that proudly installs new and used tires, the completion, even the begin of construction of a great infill project like Stage East would help revitalize the strip even more.

The Globe and Mail featured Stage East in an article a few years ago and I've highlighted a few of the key points here.

The building will consist of two four-storey towers linked by an interior courtyard and glazed corridors leading to a freestanding elevator. There will be 24 units between the towers.

"The way that we've arranged the building around this courtyard — with these glazed links — no one's going to be a stranger in the building," Mr. Witt says.

"Everyone is going to see you walking through the corridors and know who everyone is. It's a real community that we're trying to make here."

A green roof will be put on top of the mezzanine, while the courtyard and balconies will have landscaped dividers. Operable windows will be installed, and the south side of the building will have large overhangs.

You can still visit the Stage East Lofts website @ StageEastLofts.com which clearly states that the project is 100% sold out and occupancy was slated for 2009, but where are the cranes?

Well, according to a purchaser I know, buyers received a letter a while back pushing the occupancy date from Fall 2009 to Fall 2011, the reason being that the city designated the building as "complex" and is submitting it to the same scrutiny as a 200+ unit building.  To make things more complicated, the developer has decided to change architectural firms to one more familiar with projects of this level and complexity in the hopes that it might speed the whole process up.

So for the meantime Leslieville residents still have a spot to get quality new and used tires installed, but hopefully in the next year or so we will see the beginnings of what should be a gorgeous addition to the neighbourhood.