Toronto’s Real Estate Market in 2014 – A Year in Review

As 2015 slowly approaches I thought it would be worthwhile to take a look back at how Toronto’s real estate market performed in 2014 to see if it can offer us any insights into what the year ahead might bring.

The real estate market in 2012 got off to a strong start with sales up 12% during the first six months of the year. Then in June of 2012 the federal government introduced several new changes to insured mortgages in Canada which impacted buyers with less than a 20% down payment. The biggest change was a reduction in the maximum amortization period on insured mortgages from 30 years to 25 years. The amortization period reflects the number of years it would take to pay off your mortgage assuming your interest rate and monthly payments remained unchanged.

These changes pushed many buyers to put their home buying plans on hold and we saw this reflected in the market as sales were down every single month between July 2012 and June 2013. Combined, sales were down 12% during those 12 months.

Then in July 2013 the market suddenly saw a surge in demand with sales increasing 13% and eventually jumping by 26% in September. This spike in demand lasted the remainder of the year pushing sales up 16% during the second half of 2013. This big swing in sales volumes suggests that it took roughly one year for many of the buyers who put their home buying plans on hold because of the mortgage rule changes in 2012 to jump back into the market.

Fall markets are usually less competitive than the peak spring market but this was not the case in 2013. This sudden increase in demand resulted in a very competitive fall market with a high number of bidding wars.

Anyone who followed Toronto’s real estate market closely in 2014 knows that the fiercely competitive conditions we saw in the fall of 2013 followed us right into the new year. Stories of homes getting 30+ offers on their offer night were the norm during the first few months of 2014. As the market progressed into the summer months and then into the fall we saw market conditions gradually cool down. We have still been in a seller’s market during the latter half of 2014 but the fierce competition we saw early in the year has thinned out. We’re more likely to see houses receive 2-6 offers rather than 30+ on their offer night and we are even seeing homes sell with just one offer in neighbourhoods that are normally very competitive.

If we take a look at the chart above which shows the percentage change in sales during 2014 it isn’t clear why the market was so competitive during the first four months of the year given that the sales were effectively flat during that period compared to the year before.

To get a better understanding of why the market was so competitive early in 2014 we have to also look at the inventory over the same period. It’s the combination of both demand and supply that determines how competitive the market is going to be.

As people buy homes, they effectively reduce the available inventory of homes for the following month by taking that home off of the market. This is exactly what happened in late 2013. The strong demand during the last few months of 2013 ended up taking a lot of the existing inventory out of the market. Many of the houses listed in November and December of 2013 that would normally take 2-3 months to sell ended up selling very quickly because of the significant spike in demand. Not only did this mean higher sales in the last few months of 2013, it also meant that there were fewer houses available for sale early in 2014. This decline in active inventory combined with a 5% decline in new listings during the first four months of 2014 meant that there were far fewer homes available for sale.

The chart below shows the year over year percentage change in inventory. 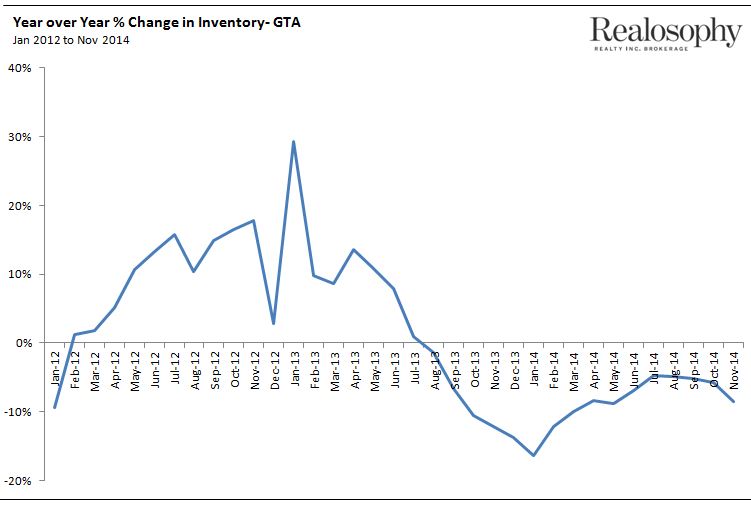 The fierce competition we saw in Toronto’s real estate market early in 2014 was the result of two factors. Firstly, the steep decline in inventory meant there was a shortage of homes available for sale. The second key driver was very strong demand for houses. The high demand for homes we saw late in 2013 did carry over into the first few months of 2014 even thought this wasn’t reflected in the sales numbers reported by the Toronto Real Estate Board (and in the chart above).

The sales numbers aren’t showing this strong demand for a couple of reasons. Firstly, people can only buy what’s available for sale and when there is a significant decline in the number of homes available for sale we’re less likely to see a big increase in the number of homes sold. Second, sales numbers only show us how many people won their bidding wars in any given month, it does not reflect how many people lost. Put another way, it does not accurately reflect how many active buyers were in the market only how many actually bought. I discuss this shadow demand effect in more detail in a previous post. 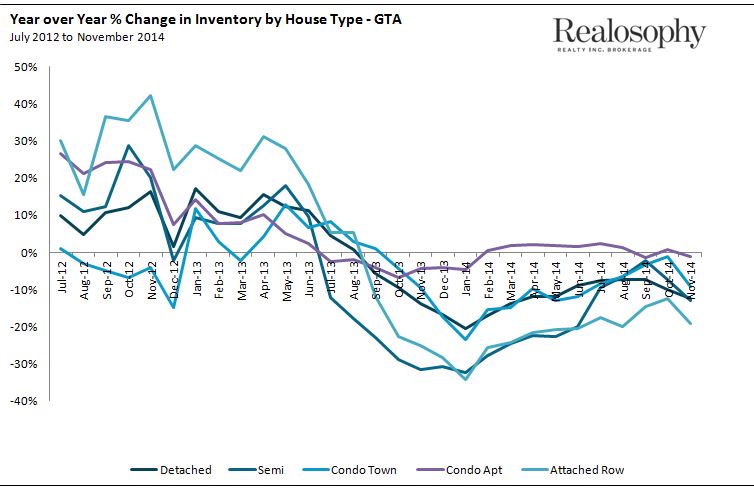 It was no coincidence that the competition for homes in early 2014 was the hottest for semi-detached and attached row houses.

Even though sales are actually up 5% during the second half of 2014 it’s the improved inventory levels we see above that have caused the market to feel like it’s cooling down relative to the first half of the year.

I do not expect us to see a repeat of 2014 this year and by that I mean I do not expect the year to start out as competitively as it did last year. Toronto’s real estate market will continue to be a seller’s market but the level of competition for homes will be slightly more balanced than what we saw last year. Fewer stories of homes getting 30+ offers and more stories of homes getting 4-6 offers on their offer night.

The strong demand will be supported by a good supply of homes early in 2015. I’m finding that many homeowners who were planning on listing their home late in the fall have decided to list early in 2015 instead because they are seeing homes in their neighbourhood not get any offers on their offer night and they’re hoping the new year will bring new buyers with it.

In my next post I’ll take a closer look at what we saw in Toronto’s condo market during 2014 and what we should be keeping an eye out for in 2015.

A deeper dig into a new pitch from 'Key'.
Read More
Market

Why a change who's behind the demand for homes makes all the difference.
Read More