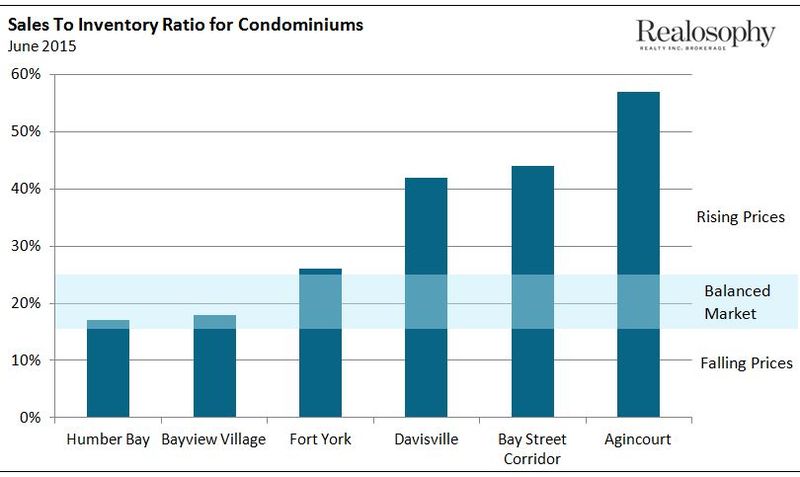 Given all the press about Toronto’s booming condo market, it’s no surprise that one of the most common questions I get from condo buyers is how should they decide which neighbourhood to buy in. More specifically, which neighbourhood is a safe bet and has strong potential for future price appreciation.

While it’s impossible to predict future appreciation in prices, there are a number of things you can do to help ensure you’re buying in a neighbourhood that has a higher likelihood of appreciating when compared to other neighbourhoods in the same city.

Since 2008, Realosophy has been analyzing real estate sales by neighbourhood for our clients and for the Globe and Mail and one thing we’ve learned in that time is that house and condo prices within the same city can appreciate at very different rates across neighbourhoods - the same way markets within Canada like Toronto, Ottawa and Calgary can behave and appreciate at very different rates.

To get a better idea of what this looks like in real life, the chart below shows the SI ratio for condos (condo apartments and condo townhouses) in June 2015 for six different neighbourhoods in Toronto. You can see that the SI ratio ranges from a low of 17% in Humber Bay to a high of 57 % in Agincourt. This means that just 17% of the available condos in Humber Bay sold in June compared to 57% in Agincourt.

When the SI ratio is in the range of 15% to 25% the market is generally considered to be balanced resulting in little to no change in average prices. When the SI ratio is below 15% there’s a higher likelihood that prices will fall over time and when the ratio is above 25% we tend to see higher rates of appreciation.

Because we are looking at just a one month snapshot of the SI ratio in these markets, we cannot draw any big conclusions about the condo market in these neighbourhoods and in particular on potential price appreciation in the future because we don’t know if these numbers are anomalies or if they are consistent with the neighbourhood’s longer term trend. That being said, I decided to also look at the appreciation rates for condos in these neighbourhoods over the previous two full years to see how prices have changed over time.

The following chart shows the two year appreciation in condo prices from 2012 to 2014. 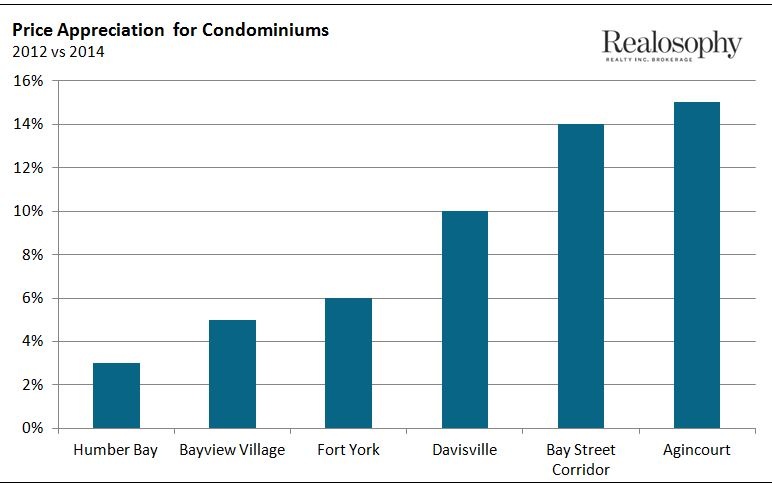 From the chart above we can see that the average price for a condo over the two year period has appreciated from a low of 3% in Humber Bay to a high of 15% in Agincourt suggesting that the SI ratios we are seeing for June are probably not one month anomalies, but likely consistent with the neighbourhood’s longer term SI ratio trend.

Looking at the ongoing SI trend for a particular neighbourhood gives us a good sense for how balanced the resale market is today.

In Toronto, we've started to assume that if too many cranes are up in a neighbourhood, that neighbourhood is going to take a dive soon.

If you’re in the market for a condo remember to look at the balance between the supply and demand for condos in the resale market in the neighbourhoods you’re considering, along with the new condos planned for that neighbourhood. It could make the difference between your condo being a money making vs money losing investment.