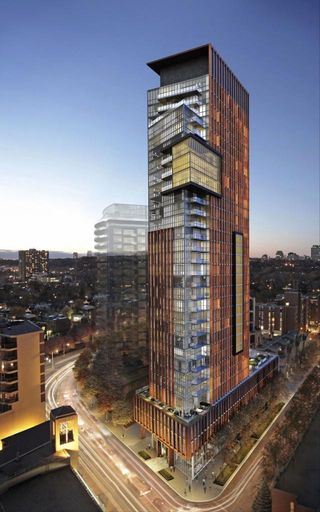 Are all Condos a Good Investment?

Many research focused home buyers looking to make a smart home buying decision will often invest a lot of their time studying the average price per square foot in the condo building they’re interested in. There are two main problems with focusing exclusively on average prices.  Firstly, prices are a lagging indicator which means that the change in prices in a building today reflects underlying events and imbalances in the building over the past 6-24 months. Furthermore, prices today often mask what is really happening in a condo building.

In my recent post I wrote titled How to Avoid Buying at the Peak of a Real Estate Bubble I offer a real life example of how we were able to see the signs of a declining housing market in Phoenix Arizona two years before prices actually fell. In that example, prices remained relatively constant for two years while the inventory of homes available for sale soared - a sign that supply exceeds demand.

A similar approach can be used to compare one condo building to another. Condominiums are their own mini communities that can and should be analyzed independently from other buildings. It’s not uncommon to have two neighbouring buildings with very different investment potential.

When you’re trying to decide if a condo building is a good investment you want to ask one important question: out of all the condos that were listed for sale in that particular building over the past year, how many actually sold?

The absorption rate is an important metric because it gives you an indication of the balance between supply and demand in a building.  A high absorption means demand is strong and may even exceed supply which generally results in higher prices.  A low absorption rate tells us that the supply of units in that building exceeds the demand and usually results in a decline in prices.

The absorption rate today tells us which direction prices are likely to head in the future.

Let’s take a real life example to highlight how the absorption rate can differ in two actual condo buildings. 32 Davenport is a Yorkville condo that was completed in 2015 and has just over 200 units and 18 Yorkville is a 10 year old building in the same neighbourhood with just over 300 units.

The chart below shows the absorption rate for each building. 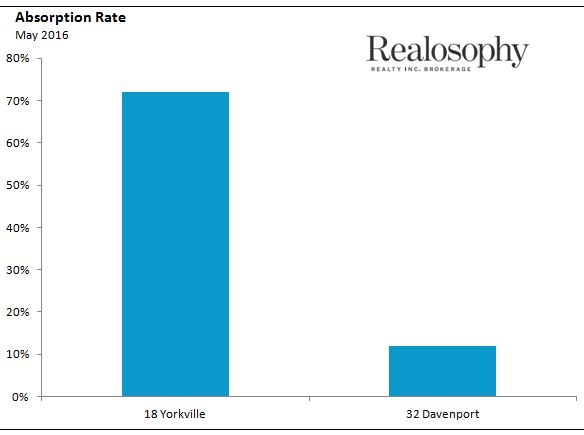 This of course leads us to two important questions. Why is this happening and why does it even matter?

When 32 Davenport was originally marketed and sold as a pre-construction condo back in 2011, condos were selling in the $750+ per square foot (psf) price range. Four years later, many of the investors who bought into the project are looking for a considerable return on their investment and are listing their units for sale in the $1,000 - $1,100 psf price range. The asking price set by many of these sellers is not based on any market comparable but rather on the price that the seller has decided they want for their condo to make their speculative investment worthwhile.

The market in turn is responding by allowing these highly priced units to sit on the market with only a handful of units actually selling.

If the units are so overpriced why don’t the sellers just reduce their price so that they’ll actually sell?

The short answer to this question is that sellers are stubborn. In the stock market, when the demand for a particular stock drops prices fall instantly to a level where the market will clear – supply will equal demand. This decline happens instantly which is why we can see stock prices fall 20%+ in a single day.

The real estate market behaves quite a bit differently from the stock market. When the demand for homes falls and the inventory rises, prices usually don’t fall right away. They don’t fall because most sellers are more inclined to either hold out for the price they want or to take their property off the market than they are to accept a significant price reduction just so that their property will sell.

We can see this price stickiness in the very low absorption rate at 32 Davenport. Nearly 90% of owners preferred to not sell their condo over taking a price that was below what they wanted.

What does this mean for condo prices at 32 Davenport? It really depends on the motivations of the existing owners. The few units that have sold so far ended up selling in the $900+ psf price range - well below the asking price of most other sellers.  If more owners decide they can’t hold out for the inflated price they were hoping for and decide to sell for less, then the prices will continue to fall until they reach a level that the market decides is right.  Whether that eventual average price is $950psf or $850psf is unknown, but what I can say with some confidence is that I don't expect to see any strong appreciation in condo prices at 32 Davenport over the next year or two.

We saw something similar happen with Festival Tower, a condo in Toronto’s entertainment district, when it was completed back in 2011. During the first two years after Festival Tower was completed only 20% of the units that were listed for sale actually sold.  As a result, prices fell between 2011-2014 before finally recovering slightly in 2015. The story with Festival Tower in 2011 was similar to what we are seeing at 32 Davenport, inflated expectations from investors when the condo first completed resulted in very low absorption rates.

When the majority of units listed for sale in a condo are not selling – resulting in a low absorption rate – this tells you that the supply of units coming on the market in that building exceeds the demand for those units. This imbalance will generally result in very little price appreciation and possibly even a decline in prices in the building.

Buyers who are just focused on looking at the average price per square foot or even comparable sales in the building have their eyes on the rear view mirror.  To understand where prices might be heading in the future, look at the absorption rate.

Interested in making smarter home buying decisions? Sign up for my talk here or below where I’ll walk through what data is telling us about Toronto's real estate market and will share some examples of how buyers can avoid making preventable mistakes.

Rendering of 32 Davenport from urbanToronto