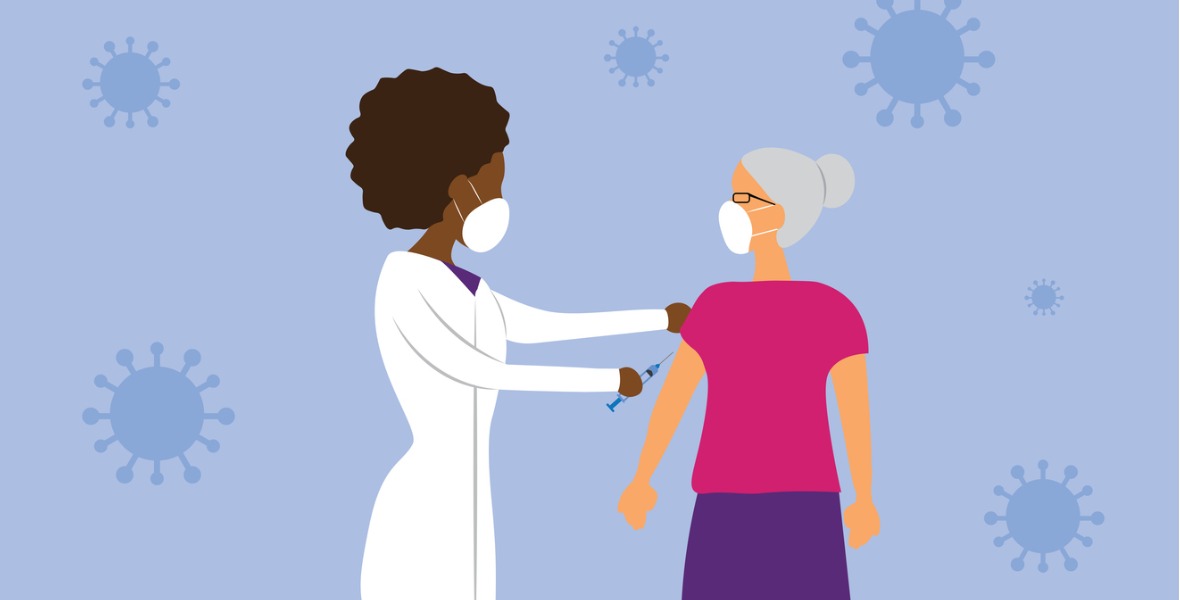 We are in the middle of a race between the virus and the cure, and both the timing and the outcome are still very much in question. The direction of mortgage rates depend on who wins.

Canadian mortgage rates are at rock-bottom levels, and the only debate today is over how long they will remain there.

The Bank of Canada (BoC) recently offered a more optimistic economic forecast that was tied to the earlier than expected arrival of vaccines. It cautioned that our recovery will still be drawn out and uneven, but less so if we are able to meet the vaccination timetable that our federal government is committing to.

Vaccination rates are critical now because our economy will continue to be hampered by varying stages of lockdown until we achieve herd immunity, which will occur when 20 million (or so) of us have had our shots. Our federal government is promising that every Canadian who wants a vaccine will have access to one by September, and that is also when it expects us to reach that goal.

If vaccination rates hold the key to our recovery, and if the BoC’s forecast is underpinned by our federal government’s planned vaccination timeline, then tracking actual vaccination rates relative to that timeline will provide us with a useful gauge of how our economic momentum is lining up with the Bank’s projections.

Before we take a more detailed look at our vaccination progress, here’s a quick recap of our current mortgage-rate backdrop.

Variable mortgage rates are priced on lender prime rates, which move in lockstep with the BoC’s policy rate.

Last March when the pandemic began, the Bank slashed its policy rate by 1.50%, taking it down to 0.25%, where it currently stands. Then last July the Bank took the unusual step of offering explicit forward guidance and confirmed that it wouldn’t raise its policy rate until some time in 2023. It has repeated that guidance many times since, and in December also floated the possibility that it might enact a micro-cut between now and then (which I write about in more detail here).

Fixed mortgage rates are priced on Government of Canada (GoC) bond yields. These yields aren’t directly tied to the BoC’s policy rate, but they do move in response to changes in the Bank’s outlook.

In normal times, the BoC influences our fixed mortgage rates only indirectly. But these are unusual times, and when the Bank was cutting rates and offering extraordinary forward guidance, it was also using quantitative easing (QE) programs to buy at least $4 billion worth of government debt each week.

Those QE purchases are now focused on the government bonds “that are most important to households and businesses”, and not surprisingly, they have included large quantities of the five-year GoC bond, which our much-loved five-year fixed mortgages are priced on.

This has helped to suppress GoC bond yields, and by association, our fixed mortgage rates. For now.

If the BoC believes that our economic recovery has reached a more sustainable footing, it will begin to taper its QE purchases, and when that happens, it is expected that our government bond yields, and the fixed mortgage rates that are priced on them, will rise in response. While it may not be intuitive at first glance, changes in the BoC’s outlook are therefore likely to impact our fixed mortgage rates well before they impact our variable rates.

Now that we’ve set the stage, let’s return to vaccination rates and take a look at how Operation Jab has been going thus far.

Here is a chart, courtesy of the Globe and Mail, that summarizes the federal government’s expected timeline for vaccinations. Thus far, almost one million Canadians have received a shot. (You can track our real-time stats here.) 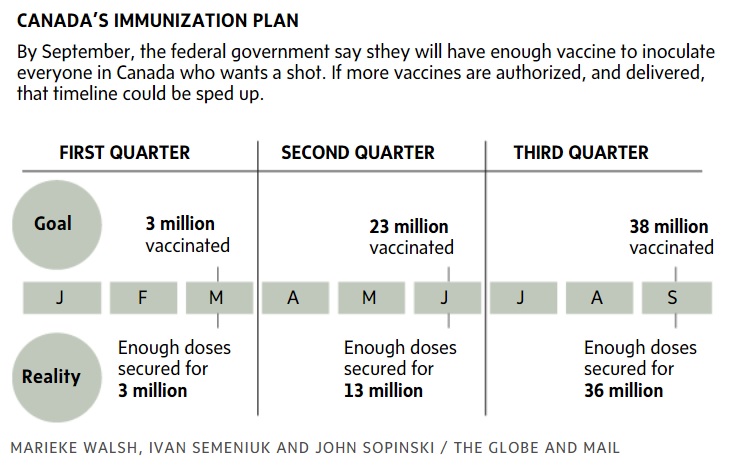 The good news is that two vaccines have now been approved and are being distributed, and others are not far behind. The not-so-good news is that there have been repeated setbacks in the production, receipt, and administration of the first wave.

The first approvals were granted to Pfizer-BioNTech (Dec 9) and Moderna (Dec 23). Since then, expected shipments of both have been reduced and delayed, and other issues have arisen, such as a disagreement over whether Pfizer-BioNTech’s vials contain a total of five or six doses.

Political intervention is also now becoming a factor. Most of the vaccines Canada has purchased are being manufactured in Europe, and the European Union is demanding that their orders be filled before vaccines are exported elsewhere. Our government has said that we have thus far been assured that our orders will not be impacted, but it’s hard to be confident that will remain the case.

Manufacturing and distribution challenges are somewhat to be expected, and further vaccine approvals shouldn’t be far off. The AstraZeneca vaccine is expected to be approved within weeks, and the Johnson & Johnson and Novavex versions could also come online soon. But wide-scale vaccinations contain other layers of complexity:

We are in the middle of a race between the virus and the cure, and both the timing and the outcome are still very much in question. Herd immunity by September is a best-case scenario.

We aren’t producing any of the approved vaccines domestically, our orders have been repeatedly reduced and pushed back, we don’t know the details of those agreements because our government hasn’t publicly shared their supplier contracts (as most others have), and our current vaccination rate per capita ranks 26th in the world. (If this were the Olympics we’d be outraged!)

There is no harm in shooting for a goal of vaccinating 20 million Canadians by September, but at this point the federal government’s plan appears to be based on a wing and a prayer – and the same can be said about the BoC’s more optimistic economic forecast.

I’ll report back on vaccination rates and compare them to the above chart as we pass each milestone date. And just in case it needs to be said, I’m hoping that we achieve herd immunity by September. I’m just not betting my mortgage rate forecast on it.

The Bottom Line: Five-year fixed and variable rates inched down again last week. I expect the trend of flat or falling rates to continue for the near future. Whatever happens after that will be determined by the race between the virus and the vaccines.