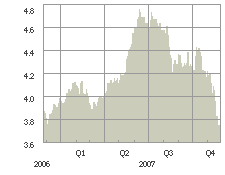 Rob Carrick from the Globe and Mail had a great article last week that highlighted the effects the US subprime mortgage collapse is having on Canadian mortgage rates.

In a previous post, I highlighted the differences between fixed and variable rate mortgages. I specifically discussed how variable rates are primarily based on the prime rate whereas five-year fixed rates are based on the current rates in the bond market.

Banks go to the bond market to borrow the money that they in turn lend to you for your five-year mortgage. The rates that banks pay to borrow the funds often depends on the yield for comparable five-year bonds in the marketplace. One of the benchmark yields that the industry keeps an eye on is the yield for five-year Government of Canada bonds. The yield on government bonds is important because they typically represent the most secure bond in the market. This means that the interest rates that banks are paying to borrow money, and the interest rate you are paying for your mortgage, is going to be at some premium over and above the current yield for a comparable government bond.

But over the past few months, the spread between five-year government bond yields and five-year mortgage rates has jumped significantly. This week the spread reached 3.74%. Which means that with the government yield at around 3.65%, we are seeing posted five-year mortgage rates of roughly 7.39%.  This increase in the spread is being linked to the increased rates banks are paying to borrow the funds required to finance mortgages. The Globe's Rob Carrick explains:

Canadian banks don't have much exposure to the U.S. subprime mortgage sector, where there's been a surge of defaults by people who were bad credit risks to begin with. And yet, our banks are affected by the unravelling of this market because of the way it has made big investors leery of buying pretty much anything that isn't guaranteed by a government. That's why there's a growing differential between the federal government's bonds yield and what banks must offer to get people to buy their paper.

Just how high is this differential? According to Melanie McLister from Canadian Mortgage Trends, the last time we saw spreads this high was during the recession of 1980 – 1981.

Even though most economists are expecting the Bank of Canada to cut rates in the short term, don’t expect any meaningful drop in fixed mortgage rates any time soon. According to Aron Gampel, Scotiabank’s deputy chief economist, "If we are going to see rate relief on the mortgage side, it will come later rather than sooner, and that means probably some time in the late winter or early spring of 2008 at the earliest."

Real Insight: The Long and Short of Interest Rates

Real Life: How Long and Short-Term Interest Rates Affect You

END_OF_DOCUMENT_TOKEN_TO_BE_REPLACED
This Week In Real Estate