Nestled in between North Toronto and Forest Hill lies the neighbourhood of Allenby (check out Realosophy’s Neighbourhood Profile for school and housing stats). Although retail and restaurants are located on the portion of Eglinton Avenue West that creates Allenby’s southern border, the remainder of the neighbourhood is residential.

Transit provides access to Allenby via bus routes Avenue Road 5 and 307 Eglinton Avenue West which regularly travel to and from nearby subway stations. As it is mostly residential, traffic calming zones are  located all through Allenby. Along Roselawn Avenue, for instance, stop signs alternate with speed humps (a larger, flatter version of speed bumps) throughout the entirety of Allenby. This creates a slow, safe environment for both drivers and pedestrians and unfortunately causes traffic build-up and when street-parked cars are factored in, navigational prowess behind the wheel is an asset. Pay attention to signage as non-residential traffic is restricted during peak traffic hours on the north-south running streets.

All-brick American foursquare-styled homes, popular in early 1900s, can be found in this neighbourhood. Upon closer inspection, homes of this style that sit side by side are often mirrors of one another giving the appearance of similarity but not of identicalness. Tudor revival and stick-style homes along with colonial styles are also part of Allenby’s housing array – leading to the assumption that HomeOwners had extensively renovated. The majority of homes are two-stories however bungalows can be found here and there a 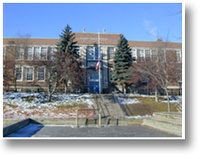 The sole school within the neighbourhood, Allenby Junior Public School located on St. Clements Avenue, provides schooling for grades 1-6 as well as a French immersion program. North Preparatory/ Alternative Primary and Our Lady of the Assumption School lie just outside Allenby’s borders.

Historically, Allenby is said to be the site of a Huron group of First Nations that had established a village six hundred years ago around an artesian spring that flowed where Roselawn Avenue runs today. Today, the close set houses seem reminiscent of that very village. Yitz’s Deli on Eglinton has been a neighbourhood favourite and today patrons from all over Toronto continue to make their pilgrimages for knishes and knuckwurst.

Despite being sandwiched between two large, well-known neighbourhoods, Allenby is just as established. This could have been an unavoidable side-effect from its location (location, location) however the residents of Allenby have taken their community and run with it. The establishment of the Allenby News speaks volumes of omnipresent community interaction that sits at the heart of this little piece of Toronto.