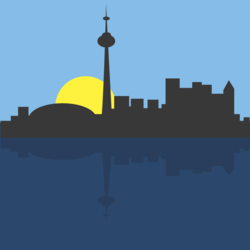 He was a young guy, fresh-faced and eager - to talk to me.  Not necessarily odd, but odd for a dimly-lit subway car after a long work day.  "Is that what you work on?" he wanted to know, pulling out his ear phones.  In my arms, growing heavier by the station, were thick, glossy reports bearing colourful titles - "Developing Around Transit" and "Remaking the Urban Waterfront."  "There is nothing more important than that stuff," he declared as my stop approached.

Transit.  Waterfront.  Toronto.  It seems that we just can't get enough of this stuff.  I was actually returning from an after work event hosted by the Urban Land Institute, a forum which brings together a wide range of professionals in the real estate and planning industries to discuss things like public transit and waterfronts.  A presentation from Waterfront Toronto had emphasized, among other things, the importance of European-style pedestrian streets to revitalization efforts currently underway.

Back on the subway, my young friend had views of his own about what matters most when it comes to our waterfront - getting as close to the water as possible.

What about you?  What would you most like to see happen on Toronto's waterfront?