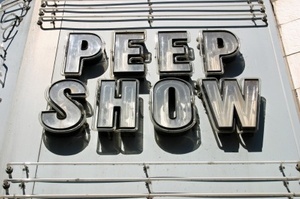 In the Eye of the Beholder: Smut and the Emerging Neighbourhood

Two Toronto communities are fighting the re-appearance of naughty nudies on their strip.  Residents of New Toronto and neighbouring Long Branch are home to an increasing number of younger families, who are not pleased that dormant zoning laws have allowed for the reappearance of 'swingers bars' and adult entertainment clubs.  At issue is an ever-growing mix of establishments, some with telling names - Jay Jay's Inn, HERS Night Club and Menage a Quatre.

While some residents have focused all of their powers on ousting the newcomers, other residents are of the view that the clubs are the least of the area's problems.

Grandpa Smut plays an interesting role in the emerging neighbourhood.  He is not often likened to the hapless seniors who find themselves dragged under by the powerful waves of gentrification, but in many ways, theirs is a common story.  Often, seedy strips are indicative of the lower rents to be found in up-and-coming areas.  But affordability attracts a diverse crowd.  Once young families and single professionals move onto the scene, these clubs are relegated to the status of unloved anciens, older relatives who should just shuffle off - leaving behind appreciating assets in their wake.  Too sympathetic a portrayal? 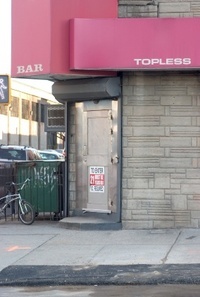 Urban enthusiasts often have a like-to-see-but-don't-go-in relationship with red light districts (this sentiment also accounts for the popularity of Showcase after 10pm in Central Ontario).  Consider the case of Times Square in New York City.  Recently, a film shooting recreated the down-and-out sexual tragicomedy that was pre-90s Time Square.  While many politicians have taken credit for the Square's tourist-friendly image - lust is now restricted to a facebook-inspired exhibition of "I was here but you weren't" poses - many residents miss the grit and grime of an earlier era (as do posters on the New York Times website).  In the good ol' days, these urban troopers carefully circumvented the Square, secure in the knowledge that some things were indeed rotten to the core in the Big Apple.

In the first installment of an inspired new series introduced by masionneuve magazine, Spacing Montreal's Christopher DeWolf similarly extols the virtue of Montreal's vice:  "They're tacky and unabashedly sexist, but the strip clubs along the downtown shopping strip are an essential ingredient in the street's heterogeneity.  Without them, St. Catherine would be just another humdrum high street."  (Grab the latest issue for a look at DeWolf's compelling photo essay.)

Back in Toronto, away from the purifying views of Lake Ontario, Bloordale Village (comprised of Brockton Village and Wallace Emerson) is another emerging neighbourhood being led by an unlikely hero-citizen.  Jason McBride of the Toronto Star details the story of Spiro Koumoudouros, owner of the dubiously aspirational 'House of Lancaster II,' a strip club that has been a neighbourhood fixture for a quarter-century.  With the area becoming home to artists and galleries squeezed out of Queen St. West and Liberty Village, Koumoudouros, head of the Business Improvement Area, is committed to driving away undesirables and helping the neighbourhood clean up.  Um, doesn't that mean losing your own smutty ways, Spiro?  "I'm helping the community, not harming it.  They love me," Koumoudouros tells the Star.   For now, Gramps.  For now.