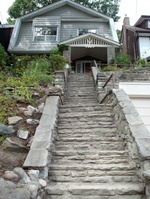 When a particular neighbourhood has a quality that sets it apart from the pack, the entirety of that characteristic generally echoes throughout its boundaries.  From Runnymede Road to Roncesvalles Avenue the windy streets that make up the bulk of High Park’s residential space are bounded by railroad tracks that lie just north of Dundas Street West and The Queensway to the south.  As I wandered throughout the area I wondered can the entirety of a vast neighbourhood, such as High Park, be influenced by its proximity to Toronto’s largest park of the same name? (check out Realosophy’s Neighbourhood Profile for local housing and school stats)

Encompassing four subway stops and numerous bus routes, residents and visitors to this neighbourhood have many ways to travel around Toronto that are convenient and, in the case of the subway, chug alongside the traffic congested Bloor Street West.  An increased number of people throughout High Park embrace the bicycle as an additional alternative mode of transport; I am willing to wager that the availability of bike lanes throughout the actual park encourage cycling here than in other parts of the city.

From one area to the next, homes within High Park differ in structure and shape, potential capacity and age.  Apartment buildings of all sizes, condominiums and tall, three-storied town homes line Bloor Street West.  Fully detached larger homes rule the side streets throughout the western portion of High Park and as one moves east, pockets of similar homes can be found all the way to Roncesvalles.  Closer to Keele Street and Dundas, high rise apartments stray off of Bloor and dapple the skyline among a more bustling retail section of the neighbourhood.  “Bloor by the Park” street signs stand on corners in this particular part of the community in a reminding way that among the city concrete there is an available green space just around the bend.

“High Park is unlike anywhere else in Toronto!” a friend of mine emphatically declared just after moving into the neighbourhood. Despite the fact that I tried to visit as much of it as I could admittedly I just could not get to the whole of High Park.  From the portions that I did visit, I noticed that even though the housing styles and retail shops can be found elsewhere in the city, the constant reminder that a bike-friendly, family-friendly, dog-friendly, fisherman-friendly communal park does indeed set the neighbourhood of High Park apart from others in Toronto.