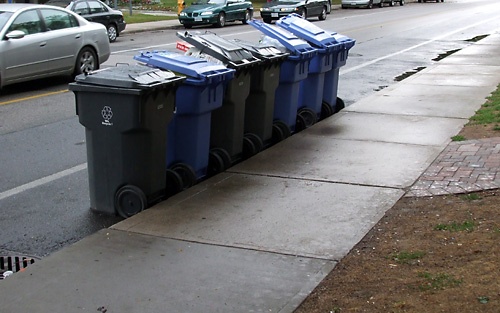 Beginning November 1, 2008 Toronto’s new water/solid waste Utility Bill will be coming to a
residential mailbox near you.  As the final stage of 2008’s garbage collection re-vamping, this annual solid waste fee ranges according to the garbage bin size selected by each household - small bins fetch a $10 rebate while the extra-large bins cost $190.  This is slated to cover the costs of garbage, compost, recycling collection, landfill management and other pro-environment endeavors.  Previously, solid waste fees were rolled into property taxes and still will be as, according to the City of Toronto, they cannot be easily separated from one another – so enter the annual rebate.

The annual rebate (cited on the city’s website as $209 per house and $157 for multi-unit buildings) will be found on the new utility bill in the form of a credit, divided among each bill received over the course of the year.  However, if you chose the smallest garbage bin you will be receiving an additional $10 rebate for a total of $219 which, spread out over the year, will be credited towards your water bill.  The seemingly arbitrary numbers chosen by the city for the rebate are based on the average amount collected for solid waste collection from property tax bills. Sound confusing?

It seems in their lofty ambitions of 70% waste reduction by 2010, the garbage and recycling higher-ups are not going out of their way to ease the transition for Torontonians.  In the case of multi-unit buildings the $157 per unit rebate will be reflected on utility bills charged to property management and condominium corporations. 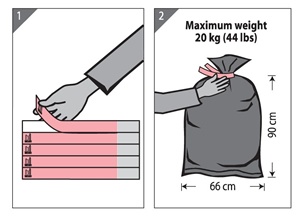 Further adding to the sanitary headache is the introduction of pink tags.  If you had ordered but as
of November 1 have not received a bin (or simply have yet to order bins) you should have been sent these city issued garbage tags in the mail.  These tags are good until January 31, 2009 and force you to put out your bin-allotted amount of garbage as you will receive as many tags as bags of garbage your bin will hold.  Everyone should have their bins by the end of January as well as five free yellow overflow bag tags; additional yellow bag tags cost $15.50 for five.

This is the first winter that Torontoians have had to use their collection of collection bins.  If last winter proved anything, I am curious as to how well the bins manoeuvre over snow and ice.  As the holidays creep up on us, many households may find that their bins are the wrong size for their needs. Up-sizing garbage bins will run you $20 while down-sizing is free; changing recycling and green bins is $10 until January '09.