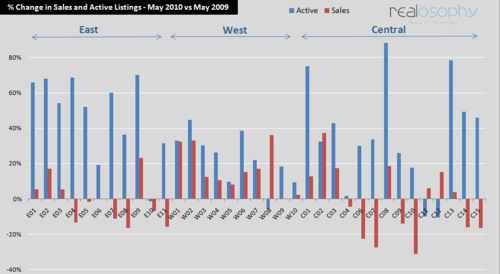 Which Toronto Neighbourhoods are Safest in a Slowing Housing Market?

The slowdown in Toronto's real estate market continued in May with sales actually dropping by 1% over the same month last year.

But not all neighbourhoods are moving in the same direction.

While prices are down 1% and inventory is up 38% on average across the GTA, that doesn't mean every neighbourhood is experiencing a similar surge in supply and decline in demand.

The above chart shows the percentage change in the number of active listings and sales from May 2009 to May 2010 by City of Toronto MLS districts.

Like stock market watching, watching every new housing stat come out can be addictive. It's important to remember that while statistics will change quickly over the short term, most buyers are buying for the long term. Focusing in on neighbourhood trends can help you make smarter real estate decisions.