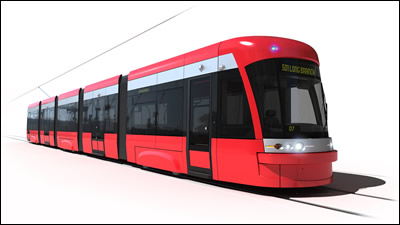 As residents of Leslieville, The Beach and Riverdale, actually most of the city, likely know, last December the city and the TTC chose the Ashbridges Bay site (at the south-east corner of Leslie and Lakeshore) over 5 other sites as the location for the maintenance and storage of the new LRVs (light rail vehicles) that will replace Toronto's extremely dated and smelly existing fleet of streetcars.

The new cars are designed by Bombardier and boast a series of improvements over the older, decaying streetcars including: 100% low floors, greater capacity, boarding from all doors, wider doors in centre sections, air conditioning (!!!), a much quieter ride for those inside and out, and much more.  To learn all about the new vehicles which will replace the old fleet in 2013, visit the TTC's LRV information site.  According to the TTC, there are still several design decisions to be made and if you follow that link you can have your voice heard.

Equally important, and very timely,is the landscape design competition that the TTC is holding for the Ashbridges Bay Maintenance and Storage Facility.

The final landscape design will incorporate or hide (depending on your choice) the industrial aspects of the maintenance facility into the softer, natural environment of the Martin Goodman Trail and Ashbridges Bay.  The TTC has narrowed the competition down to 3 firms and their designs and is seeking your input as to which design to implement.

The 3 firms submitting the final designs are Brown and Storey, Fleisher Ridout Partnership and GH3.   A snap shot of each design can be viewed below. 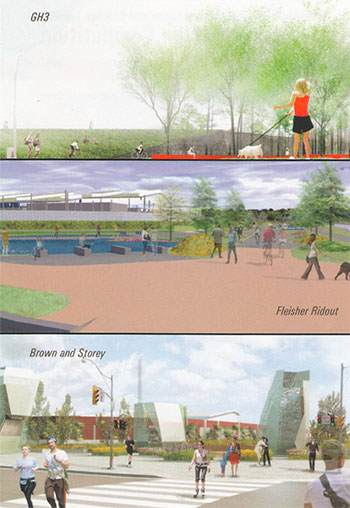 For a closer, and much more in-depth look, representatives from each firm as well as from the TTC will be at Ashbridges Bay Park (the south-east corner of Coxwell and Lakeshore) tomorrow afternoon, Tuesday August 10 from 4:00- 8:00pm in the large white tent.  Each firm will have a multiple panel display of their design on site that will showcase their concept and fully explain how it would be incorporated into the space.

While you are there, you can not only cast your vote for which design you feel should be implemented, but you can also comment on each and provide feedback that will not fall on deaf ears.  According to the TTC, "an independent jury of five, lead by the City of Toronto's Urban Design Team, will be reviewing community input and evaluating each submission".

It's important for the community to make it out and have a say as this is going to have a major impact on the look and feel of the location.  The right design could seamlessly meld the facility into the community while the wrong concept could have the exact opposite effect.

If you'd like some more info via the web, here's the City of Toronto's page for the design competition.