Back in July 2009, Matthew Slutsky from BuzzBuzzHome posted a skeptical review of Brad Lamb's newsletter of the same month which claimed that people could make an easy $40,000 by buying a new condo from floor plans before construction starts. 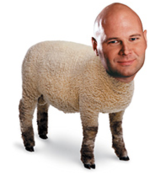 blog post over a year later in his newsletter this month stating that his investment advice has paid off handsomely for him and his clients, so baaaaa and buzz off. Interestingly, this April, Lamb felt that the time for making easy money in Toronto real estate was over.

The Bubble Talk continues this week.  The most interesting article is from David Rosenberg, chief economist for Gluskin Sheff, who appears to be softening his tone on Canada's housing market.

It may well be that Canada escaped a housing bubble and its inevitable aftershocks. But it is a close call. If it wasn’t a bubble, it was at least a giant sud.

Rosenberg:  Bubble or not, Canadian markets in for rude awakening (Globe and Mail)

Don’t listen to the doomsayers on housing (Toronto Star)

Why (housing) bubbles aren't good for you (Toronto Star)

An interesting report published by TD this week revealed that 20% of Canadian repeat buyers have owned more than five homes and 23% of respondents plan to move in the next six years.

New home sales in the GTA were down 45% in August and resale home sales were down 22% during the first half of September.

END_OF_DOCUMENT_TOKEN_TO_BE_REPLACED
This Week In Real Estate