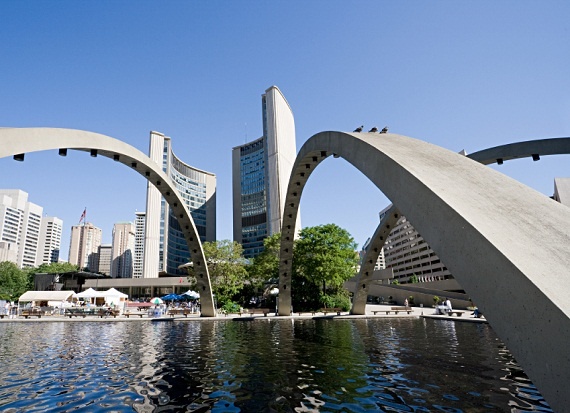 This week in Toronto: Remembering a Toronto real estate mogul, the city's neighborhoods defined by words and profiling a suburb's rapid demographic change.

Elsewhere: Political gridlock hits the U.S housing sector once again, a new rail tunnel makes some folks nervous in Istanbul and can Malaysia afford to build a new business district from scratch?

"Toronto Mayor Rob Ford says a city proposal to build between 70 and 75 affordable rental units in a waterfront condominium building is a waste of valuable real estate."

Paul Reichmann: A real estate ‘genius’ who became a global player (The Globe and Mail)

"Mr. Reichmann made his name as a gutsy investor who acquired undervalued real estate properties and hired leading architects to build landmark towers. His attention to detail was so great that he once poured water over marble tiles to show prospective tenants how First Canadian Place would shine in the rain."

"The Urbane team worked with Toronto locals to try and decipher the city’s many neighborhoods and translate them into easy-to-understand terms. It’s a city that deserves to appreciate itself more, and has a diversity like no other."

Accuracy of Canada’s housing data under scrutiny (The Globe)

"The numbers are getting more attention amid debate about just how inflated the market may be. Nearly all economists agreed that house prices were too high when Finance Minister Jim Flaherty stepped in and tightened mortgage insurance rules in July, 2012."

Can Liam and Sophia afford a million-dollar home? (The Globe)

"These parents want to stay in the Vancouver-area neighbourhood where they've been renting. Can they buy without hurting their plan for retirement?"

"The prospect of lower-for-longer interest rates, needed to help a struggling economy, has revived those bubble fears."

"The White House said, however, that it was not giving up on the nomination. "It is enormously disappointing that Republicans would filibuster this nomination of a highly qualified nominee," White House spokesman Jay Carney said."

"Imagine making $250,000 and not having to pay taxes on it. That’s the generous tax break –the home sale exclusion — homeowners are entitled to when they sell their primary residence for a gain after having lived in the home for at least two of the five years immediately preceding the sale."

“I don’t even go past the site because it hurts my heart too much,” said Eileen Dunn, a former St. Vincent’s nurse and a founder of the Coalition for a New Village Hospital, which took part in protests against the development."

"Citing the lack of government control mechanisms in the real estate market, Güvenç said poorer residents and small businesses were likely to be priced out of neighbourhoods adjacent to the new metro line."

"Malaysia is building an enormous business district in the capital city of Kuala Lumpur, but its shaky finances raise doubts on whether the Southeast Asian nation is capable of such an ambitious undertaking just now."

END_OF_DOCUMENT_TOKEN_TO_BE_REPLACED
This Week In Real Estate