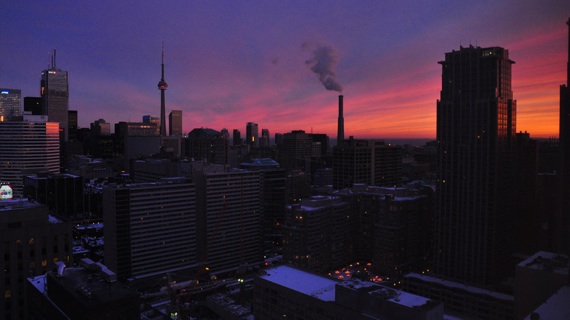 This week in Toronto: The holiday season and bidding wars go hand in hand, a new record sale in the Beaches and buyers seeking an abode in the city are forced into the suburbs.

Elsewhere: Watch out for fake real esate ads in Ottawa, the 'Great One' gets paid and New Zealand is on the verge of a housing crisis according to Dr. Doom.

"In the end, some 15 people registered bids on the underpriced property, although two of them would later withdraw. By the time the frenzy of offers was over Tuesday, the pleasant house in the sought-after Frankland school district had sold for $785,100 — more than $135,000 over the asking price."

"In many pockets of Toronto, the fall real estate market began to run out of steam as November wound down. One deal that snuck in under the wire was the sale of 412 Lake Front for $6.1-million."

“The growing number of homebuyers who live far from where they work, in car-dependent neighbourhoods, results in longer commutes and contributes to traffic congestion and poor air quality. This hampers the region’s economic success and reduces its quality of life,” the report states."

“We’re really interested to know how you view your neighbourhood,” said Liora Freedman, from Community Planning. “What needs to be updated in these policies to reflect what’s on the ground?”

"An Ottawa woman says she was shocked to learn the condo she was selling online was also being offered on another website at a deeply discounted price, part of a complicated scam targeting unsuspecting home buyers."

“We live a little bit like French people in North America, which isn’t possible in Toronto,” said Ricard, 32, who paid $1.15 million with his partner for their new home. “The image Montreal projects in France and elsewhere is the life of the whole world.”

A word to the doomsayers: Bank of Canada sees no housing crash (Globe)

"As they held their policy steady today, Governor Stephen Poloz and his central bank colleagues said the market is certainly stronger, but that's at least partly because home buyers are taking advantage of low mortgage rates before they rise again."

"Sales of existing homes nationwide in October were 8.3 per cent higher than a year earlier, slightly below economists’ expectations. The Canadian Real Estate Association will release November’s national data later this month."

“We don’t have these wild fluctuations,” he said. “It’s not like, ‘Well we bought, we got transferred and now we have to sell and the market’s tanked.’ That happens in Toronto and Vancouver a lot because they can go up and down in a very short period, and in Ottawa it just doesn’t happen.”

"Mortgage rates continued their climb on the heels of strong economic reports, according to the latest data released Thursday by Freddie Mac. After bouncing around the past couple of months, fixed rates increased for the second week in a row."

"Cranes are again rising over this city, as the poster child for the real-estate collapse enjoys a new condominium boom fueled by foreign investors looking to park their money in U.S. real estate."

"For Gretzky, the real estate consolidation comes as the NHL board of governors finally agreed to pay Gretzky the $7-to-$8 million he was owed for back salary associated with his coaching duties with the Phoenix Coyotes. Gretzky, considered one of the greatest hockey players ever and The Greatest face of the NHL, was brought in to the Coyotes in 2005, and left in 2009 when the franchise suffered economic collapse."

"Nouriel Roubini, the American economist and financial expert dubbed Dr Doom - who predicted last decade's global meltdown - has picked New Zealand as having one of the world's most precarious housing markets."

END_OF_DOCUMENT_TOKEN_TO_BE_REPLACED
This Week In Real Estate