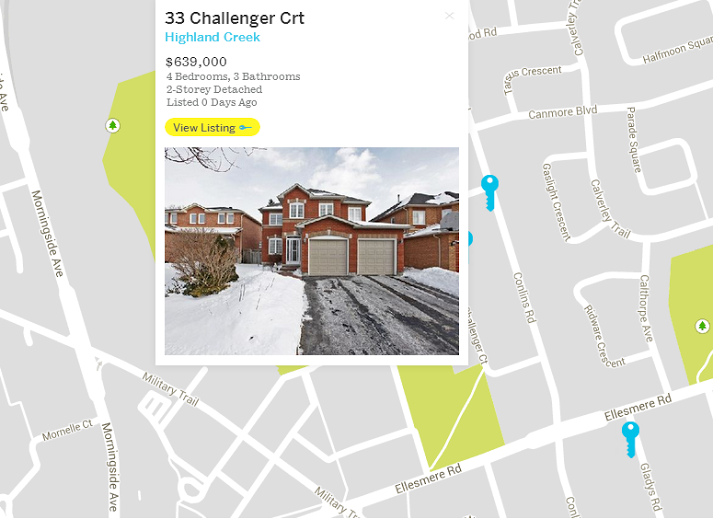 This week in Toronto: Is laneway housing set to hit Toronto, a shortage of listings plagues the housing market and the city's best elementary schools are close in proximity.

Elsewhere: What it will take for a housing crash in Canada, don't blame the tech industry for high prices in the United States and Dubai re-emerges as the go-to real estate market in the Middle East.

A beautifully maintained home in a highly sought-after Toronto community.

Can this condo jumpstart laneway housing in Toronto? (Blog TO)

"Tucked away off a quiet residential street, the property in question is currently occupied by a low-rise former boiler factory that the developers plan to extensively renovate. A separate block would be built at the expense of an existing home on the main portion of Bartlett Ave., giving the overall building a distinct "L" shape."

"Mr. Fleming, of Bosley Real Estate Ltd., writes the Toronto Realty Blog and he has a lot of readers among avid followers of the real estate scene. Over the past week, residents, readers and real estate agents have bombarded him with praise or vitriol after he wrote that the building’s finances make getting mortgage insurance a major problem."

"The shortage of new listings is being blamed for a 2.2-per-cent decline in home sales across the GTA in January and a more than 9-per-cent surge in prices, year over year, according to figures released by the Toronto Real Estate Board on Wednesday."

"The neighbourhoods surrounding this nexus of childhood education aren’t particularly expensive to buy into, at least by Toronto standards. The latest Toronto Real Estate Board data puts the average home price in Hillcrest Village at $541,194, while nearby Pleasant View comes in at $459,740. A family with young kids could find a bargain."

"But some economists say rising prices have pushed affordability in Canada’s housing market toward the breaking point, and that an increase in interest rates from current rock-bottom levels would erode affordability even further."

Competition case against Toronto realtors not over yet (The Star)

"The Toronto Real Estate Board issued a statement Tuesday saying it will “continue to work to protect the personal information entrusted to it and its members by the general public” in the face of persistent efforts by the Commissioner of Competition to “erode” those safeguards by further opening up the MLS system."

What it would take for Canada's housing market to crash, and why Pimco says it won’t
(The Globe)

"Unemployment would have to spike. While the jobless rate isn’t projected to decline – rather, it’s expected to hover around the 7-per-cent mark – it’s not forecast to surge either. “Given this macroeconomic environment, it is also unlikely that the unemployment rate will spike to 8 per cent to 10 per cent (which, we estimate, would be needed to cause a disorderly housing correction).”

"The price-to-income ratio shows the market is overvalued by 30 per cent, but she argues that depends on the definition of income, which often falls short. In fact, she argues if government transfers and investment income were included in the mix, the housing market would only be 8 per cent overvalued."
House prices still rising in Toronto, Vancouver (CBC)

"Looking forward, it is possible that strong price growth, and therefore an increase in home equity, will act as a trigger for more households to list their homes for sale."

"So the tech industry didn't push prices higher. It was drawn to places that were already expensive. This may have been because these areas had major research universities, technically skilled workers, computer manufacturing industries or nice climates. Kolko points out that the year-over-year increase in home prices in tech hubs is actually in line with, not ahead of, the national trend; that is, after one accounts for the local severity of the housing bust."

NYU Student Needs an Apartment, for Living In, and the Times Is On It (Gawker)

"This week, the section's apartment-hunting column, "The Hunt," stretches its definition of "hunt" to include Vanessa Csordas-Jenkins, a New York University junior who seeks "an advanced degree in quiet," or a pricey studio in a "1900 neo-Renaissance-style co-op with a beautiful marble lobby and a virtual doorman" near Union Square. Whichever!"

A Detailed Map of the Net Migration Flows for Every U.S. County (The Atlantic)

"In a given year, about 6 percent of the U.S. population picks up and changes counties. Young families move from Chicago to the surrounding suburbs. Recent college graduates cross the country for a first job in Boston, or Washington, D.C. Retirees relocate for good down to the Sunbelt."

Dubai Back To Being Muslim Capital Of Real Estate (Forbes)

"Not too long ago, Dubai was a buyer’s market.  But now, the city has transformed into a seller’s market once more. Higher rental prices are forcing tenants into less luxurious housing.  And while this shift into a more middle-class existence might be hard to stomach for the expats who like the nearly four-to-one exchange rate, Dubai now has a deeper property market. It’s not all about the Palm Jumeirah anymore."

"But with so many assets tied up in real estate, a slide in property prices could have widespread ripple effects – a hit to household wealth would impair consumer spending, which could derail the government’s plan to steer the nation toward a more consumption-driven economy."

In Toronto:  Buyers starting to get back into the market and would be home sellers and tenants...
Read More
Safe Investments

END_OF_DOCUMENT_TOKEN_TO_BE_REPLACED
This Week In Real Estate

In the City:  Does 69% drop in sales give new buyers a chance and inside the new real estate...
Read More
This Week In Real Estate

In the City: Home buyers begin to venture out and poor housing connected to higher number of...
Read More