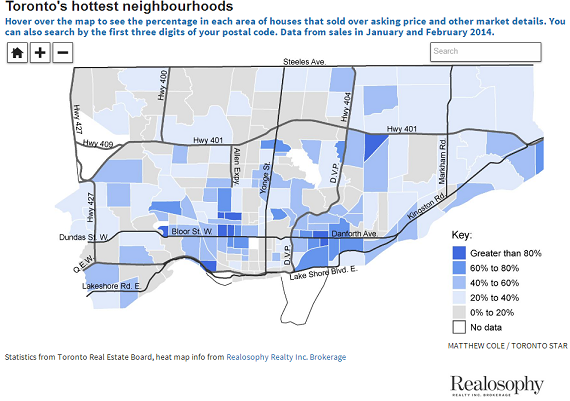 This week in Toronto: Realosophy crunches the numbers in a Toronto Star feature, it's every man for himself in real estate bidding wars, and the east end is being gentrified by a band of savvy locals.

"These bidding wars are really changing the price point of neighbourhoods fundamentally — permanently," says Leslieville realtor John Pasalis. He's seen the most heated activity in the east end of the city, even into some more suburban-like Scarborough neighbourhoods.

With the increased competition, Ms. Lelli says people could face a number of rounds of bidding which means you may have a few chances to increase your original offer. But with BMO research saying that one in three Canadians are willing to enter into a bidding war and a third of first-time home buyers will break their budgets for the right home, people need to be careful not to get too emotional.

No housing bubble to burst, Conference Board says in major survey (The Star)

It says some of the evidence cited by correction hawks, including comparing home prices as a multiple of rental costs, don’t take into account historically-low mortgage rates that keeps affordability steady. Citing Toronto, it notes that in 2013 mortgage payments consumed less than 20 per cent of average household income, the same as in 1993.

Gentrify me (The Grid)

Despite real estate bidding wars and the arrival of the stroller set, the stretch of Danforth between Greenwood and Main remained rough around the edges. So a savvy group of locals took the ’hood’s revitalization into its own hands through the power of pop-ups and social media.

Which Toronto Neighbourhood Should You Actually Live In? (Play Buzz)

Ever wonder which Toronto neighbourhood you should live in? This game will help you make that choice.

Is Canada's mortgage market safer because of Jim Flaherty? (The Globe and Mail)

But real estate, if not at a gallop, is still very much trotting. Many of us in the mortgage industry thought Mr. Flaherty’s moves would derail housing and trigger significant job losses, but most of his policies have since proven prescient and sound.

These days, because of rules brought in almost two years ago by the regulator of the country’s chartered banks, borrowing money to buy a home has become harder for many of the country’s 2.75 million self-employed workers – a group that, according to Statistics Canada, has a higher median net worth than paid employees.

Canada’s new Finance Minister is taking a hands-off approach to the mortgage market, signalling that, unlike his predecessor, he does not want to interfere in the rate-setting decisions of the banks.

The Bank of Montreal is slashing its five-year fixed-rate mortgage to levels that caused former finance minister Jim Flaherty to express concerns last year. The bank says it will offer a five-year rate of 2.99 per cent, down from 3.49 per cent.

Las Vegas came in dead last in a study that measures the strength of U.S. housing markets. Freddie Mac’s Multi-Indicator Market Index, released Wednesday, measures the stability of states and the U.S. capital, as well as the top 50 metropolitan areas. It weighs criteria including mortgage applications, income ratios and employment.

Kolko is not yet worried about a national housing bubble such as the one that tanked the economy in 2008. In most places, home prices are still in line with economic fundamentals. He found only 19 markets, of the 100 biggest metro areas, where housing is overvalued, compared to early 2008 when it was overvalued everywhere.

Interestingly, Phoenix also made the top 10. Phoenix was one of the hardest hit housing markets during the crash, with prices literally falling by more than half from peak to trough. Investors targeted the market early, buying thousands of distressed properties at deep discounts and driving prices up by double-digits very quickly. Still, Berkowitz said it's a great place for first-time buyers now.

Will the American Dream still include homeownership? (MSN)

Even after a devastating housing and mortgage crash that resulted in millions of foreclosed homes and trillions of dollars of home equity lost, the majority of Americans have not given up the idea that ownership is representative of their economic dream.

Treasurer Joe Hockey last week set up a parliamentary inquiry to examine foreign investment in residential real estate on concerns foreign investors may be pushing up house prices to the detriment of first-home buyers.

Deals are done in U.S. dollars in the capital Pyongyang and in Chinese yuan along the border with China, where most of the North's trade with the outside world takes place. The buyers and sellers then bribe housing officials to effectively approve the transaction by issuing or modifying residency documents, the defectors and experts said.

END_OF_DOCUMENT_TOKEN_TO_BE_REPLACED
This Week In Real Estate