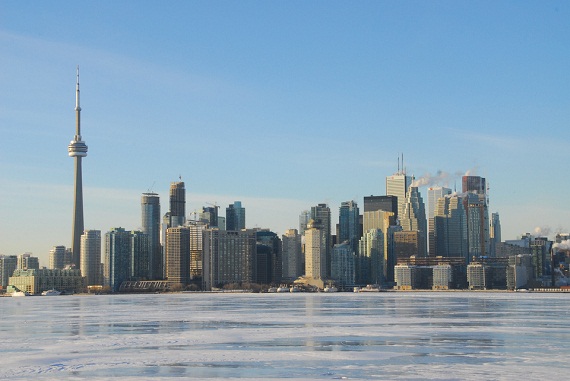 This week in Toronto: The price gap between houses and condos rises, affordability in the GTA continues to fall and the best day to buy a house in January.

Elsewhere: Analysts weigh in on the Bank of Canada's interest rate cut, a resurgent housing market is propping up the U.S. economy and the end of a Thatcher policy in the U.K.

The growing price gap between condominiums and houses hit a record high last year in the Toronto area, as the market saw a huge jump in the number of newly built condos and buyers battled over a persistent shortage of houses.

“People will often choose to drive as far as it takes to qualify for a mortgage. But once they get there, the actual costs undermine the lower cost of the house,” said Pembina’s Ontario director Cherise Burda, who co-authored, “Location matters: Factoring Location into Homebuying Decisions.”

What a $1 million house looks in Toronto vs. other cities (Blog TO)

What does a $1 million house look like around the globe? From Toronto to Hong Kong, the real estate market is a pricey one with the top players seeing a surge in million dollar properties year after year. There's less new listings, higher prices and in some cities, the $1 million to $2 million range is now considered the average. Nowadays, you can buy a fixer-upper for a mil or a tiny two bedroom with no parking. Take a closer look at the housing market in Toronto and beyond.

For years, Torontonians have been told that our city — and the region as a whole — is a house divided. The downtown-suburban split is supposed to be a defining attribute of our city. We’re told that residents from these two sides of the city have fundamentally different values and interests, which constantly put them at odds with each other.

Jan. 20 best day to get a deal on a Toronto house, TheRedPin.com says (CBC)

It's a well known adage of housing that home sales are smaller in number in January, due largely to cold weather and a sluggish start to the year after the holidays. But Fard said his company has noticed that activity tends to pick up in the third week of the month. Moreover, across the year as a whole, for whatever reason, Tuesdays are the most popular day for real estate activity — everything from new listings, to activity on websites, to actual sales themselves.

Toronto must finally get public housing right: Editorial (The Star)

There’s likely no municipal agency subject to more complaints, investigations, and scandal-inspired management change than the Toronto Community Housing Corp. Given all the audits and reports done to date, Mayor John Tory’s launch of yet another panel assigned to recommend reform might seem redundant. But there’s good reason to adopt this approach.

More than nine times out of 10, banks do drop their prime rate in lockstep with Bank of Canada overnight rate cuts. But banks have also been known to hold back a cut for themselves. The last time that happened was December 2008. The Bank of Canada slashed rates 0.75 per cent. Yet, the major banks lowered prime rate by only 0.50 per cent.

Mortgages account for most of that debt. That’s especially true in Canada’s hottest real estate markets: Vancouver, Toronto and, until recently, Calgary, where home prices seem to have defied gravity for the last decade.

Last fall, they bought a building lot for $1.1-million and are planning to build a house large enough for their family and a live-in nanny. But with a combined income of $360,000 ($450,000 when Ilsa returns to work) and an $800,000 mortgage, can they afford the builder’s $1-million price tag? Who will lend them the money?

Gerstel, 57, is part of an expanding industry of mortgage brokers and nonbank lenders who operate outside the reach of federal bank regulators. They’re thriving after Canada introduced a half-dozen mortgage rules since 2008 to cool its soaring home prices. While slowing the growth of traditional bank loans, the regulations have pushed new borrowers into an opaque market where nonbanks provide uninsured, short-term mortgages at interest rates as high as 20%.

House prices are expected to increase just “moderately” across Canada this year, led by above average gains in the Greater Toronto area but saddled by uncertainty in the West thanks to slumping oil prices.

“Demand is the strongest since the recession” that ended in June 2009 and stemmed from the collapse in housing, said Chief Executive Officer Todd Mansfield. “The economy is getting better and the labor market is getting better.”

The Supreme Court divided into ideological camps Wednesday as it considered whether fair-housing lawsuits can proceed against practices that allegedly promote racial segregation even without proof of intentional discrimination.

The average price of an apartment in New York City has surpassed its last peak, 2008, before the recession hit and the housing market collapsed. And that new high, about $1.7 million in Manhattan, may cause potential buyers to draw in a sharp and painful breath.

Right-to-buy, one of the Thatcher government's most popular policies, was blamed by critics for reducing the stock of social housing. More than 130,000 houses in Wales have been bought under right-to-buy, for council tenants, and right-to-acquire, for housing association tenants, since 1980.

Though they look like ghost cities, one day these places will stir with life. "The houses are in the middle of construction, with the exception of some that are almost finished," emails Alvarez Diestro, who's 42. "It is interesting that they build them with no fences around and they're visible to all passing around. All of them will be occupied, especially those ones for the lower classes that happen to be the majority of the population and are experiencing an important growth."

END_OF_DOCUMENT_TOKEN_TO_BE_REPLACED
This Week In Real Estate