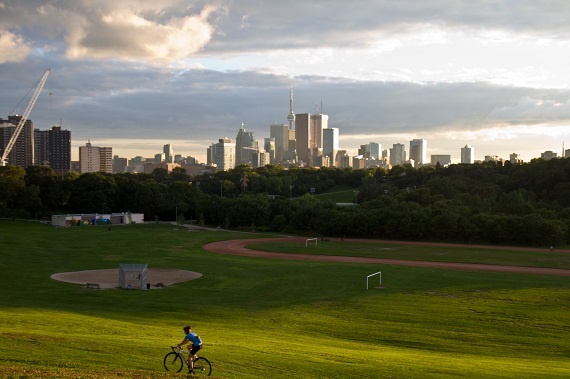 This week in Toronto:  Big money house sales are on the rise, there is a major affordable housing wait list for the Pan Am village and Bay and Avenue have the priciest condos in the city.

In Toronto, sales of plus $3-million homes are brisk (The Globe and Mail)

People who have close to $4-million to spend for a house in Toronto appear to be poised to pounce as soon as new properties hit the market. Janet Lindsay, an agent with Chestnut Park Real Estate Ltd., says sales of properties with asking prices above $3-million were coming through in recent weeks even as financial markets were roiling.

Wigwamen, a housing charity geared toward indigenous people, will open a 145-unit building this spring. More than 560 people have already applied for a spot. “There’s a desperate need for more affordable housing, particularly in the aboriginal community, but also more generally,” said general director Angus Palmer.

An average one-bedroom condo in the area is $570,198, and an average two-bedroom is nearly $1.5 million (actually, the average price is $1,497,679). There are a few reasons for this, The Red Pin says, but they all boil down to the age-old real estate truism: location, location, location.

Think Your Condo Fees Are Too High? These Owners Will Be Paying $2,000 A Month (Huffington Post)

After years of neglect and low fees, the building at 40 Panorama Court in Etobicoke required millions of dollars in repairs. Now, the building needs $600,000 more to repair mould problems, CTV reports. To raise the capital needed, residents are facing an increase in condo fees from an already-high $1,200 a monthly to $2,000 (or 66.67 per cent).

Canada’s ever growing housing bubble: As Alberta’s market tumbles, the rest of the country wonders who’s next (Financial Post)

Business is brisk for Alberta mortgage broker Adil Mawji. However, it’s not because Albertans are busy buying homes — sales are actually declining in Canada’s one-time boom province. Rather, it’s because Albertans are fearful for their jobs as the oil and gas market gets routed. They are looking to take risk off the table and lock in mortgage rates at historically low levels. “People are trying to get their mortgage secured right now and take advantage of the lower rates,” says Mawji, a senior mortgage broker at Invis Inc. and president of the Alberta Mortgage Brokers Association. “A lot of people in the oil and gas sector are not sure if their jobs are going to be around or if they are going to be making as much money. We’re trying to coach them to be prepared.”

The Vancouver, Hamilton and Toronto component indexes were all at historical highs, reflecting seller's markets in those three cities.

Sotheby’s International Realty Canada says turbulence on the Chinese stock market could send buyers from mainland China flocking to Canadian luxury real estate this fall. The realtor predicts that sales of homes worth over $1 million will rise in Toronto and Vancouver, while Montreal’s luxury market should be balanced and Calgary’s will slow due to the effects of declining crude prices.

Several economists noted that higher levels of multifamily starts in June and July were due to developers rushing to begin construction in New York before the expiration of an affordable housing tax credit, and said August’s drop didn’t signal weakness in the housing market.

Turns Out the Housing Crisis Wasn't All About Subprime (Bloomberg)

When we talk about the past decade's housing crisis, it's natural to talk about subprime loans. Subprime loans give us a convenient, conventional story: predatory lenders charging people unconscionable interest rates, forcing innocent people into foreclosure and the rest of us into the worst financial crisis since the Great Depression.

Taking Inclusionary Zoning All the Way to SCOTUS (City Lab)

Developers in California are taking their fight against the state’s inclusionary zoning laws to the U.S. Supreme Court, just as cities across the nation are increasingly committing to similar laws to address affordable housing shortages. The California Building Association opposes the soon-to-kick-in law mandating that developers discount a percentage of units in new housing projects for low-income families. They claim it constitutes an illegal “taking” of private property by the government and hope that SCOTUS justices will agree with them

The 9 worst housing markets in the world (Business Insider)

The Global Property Guide has compiled and analyzed the property-price performance of the world's big economies. We've put together a list of the nine worst markets based on year-over-year, inflation-adjusted price performance as of Q2.

Ideas to solve London’s housing crisis – in pictures (The Guardian)

END_OF_DOCUMENT_TOKEN_TO_BE_REPLACED
This Week In Real Estate