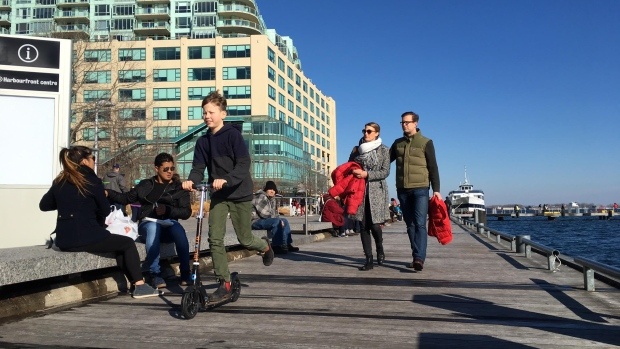 This week in Toronto: Housing market sees gains for first time in six months, lull gives buyers the upper hand and what can $500,000 get you in the 6?

Elsewhere: Bank of Canada explores closer ties to Ottawa, putting a price on heat in New York City and the future of custom housing may come from the UK

Toronto's housing market pulled back last year after Ontario implemented a series of measures such as restricting foreign buyers to cool the once red-hot market.

An analysis by Zoocasa shows more neighbourhoods have become buyer’s markets — areas where there is enough competition among sellers that buyers have more choice and more room for negotiation — conditions that simply weren’t on the table in heated January 2017.

What can $500,000 get you in Toronto's property market? A one-bedroom condo half the size of a badminton court (Financial Post)

Buyers with a half a million dollars to spend in red-hot downtown Toronto had to settle for a one-bedroom unit with just 430 square feet of space — that’s roughly half the size of a standard badminton court. Compare that to Calgary and Edmonton’s condo markets, where the figure was enough for a two-bedroom unit between 850 and 1,000 square feet in a desirable area near the core.

In Toronto, a Likable Space Arrives Underneath a Loathed Expressway (City Lab)

The transformation started with a phone call. In April 2015, retired city planner and philanthropist Judy Matthews rang her friend and prominent urban designer, Ken Greenberg. She and her investment banker husband, Wil, were interested in funding a legacy project based around a new public space, she said.

Higher levels of household and government debt, a long-term decline in interest rates and slow growth are all making the job of central banks more difficult, Mr. Schembri pointed out. Real – or after-inflation – interest rates have slumped to near zero from more than 6 per cent in the early 1990s.

The stress test is designed to see if borrowers can afford interest rates that are higher than the abnormally low levels of today. At Mr. Cocomile's office, a lot of people are flunking the test. He's had 10 people contact him about refinancing this year who did not end up qualifying. "All 10 would have qualified a year ago," he says.

How Canada became an offshore destination for 'snow washing' (The Guardian)

Other impacts are more subtle. A 2016 report found that nearly half of the 100 most expensive homes in Vancouver – which ranks among the world’s least affordable housing markets – were bought using shell companies, trusts or nominees.

For many, the idea of a ban on foreign buying of real estate is no longer considered a radical idea – neither is revolutionizing property taxes, or joining forces with Beijing tax collectors. The cry is to simply do something big enough that it will turn this runaway train around.

New York City has seen the most days below freezing this winter since 1961. The frigid temperatures have taken a toll on Nycha’s aging boilers, leaving 323,098 residents without heat or hot water at some point during the heating season. Nycha officials have said that between Oct. 1, 2017, and Jan. 22, 143,000 apartments were without heat and hot water for an average of 48 hours.

Kept out: How banks block people of color from homeownership (Dallas News)

Like virtually all her neighbors in Las Monjas, one of eight adjacent communities in the larger Caño Martín Peña enclave that’s home to 26,000 people, Peña had no blueprint for her house. No permits. No inspections. No insurance. Not even title to the land underneath it.

International
Is custom build the future of housing? (The Guardian)
It is Grand Designs on an epic scale. The first streets on the UK’s biggest mass self-build site are now taking shape, as a town of 1,900 homes ranging from naked black box minimalism to extravagantly unique designs emerges in Oxfordshire. Graven Hill is the UK’s boldest experiment ever in self-build and custom build, enabling individuals to design inspiring homes on pre-prepared plots, limited only by their imagination and their budget.

END_OF_DOCUMENT_TOKEN_TO_BE_REPLACED
This Week In Real Estate