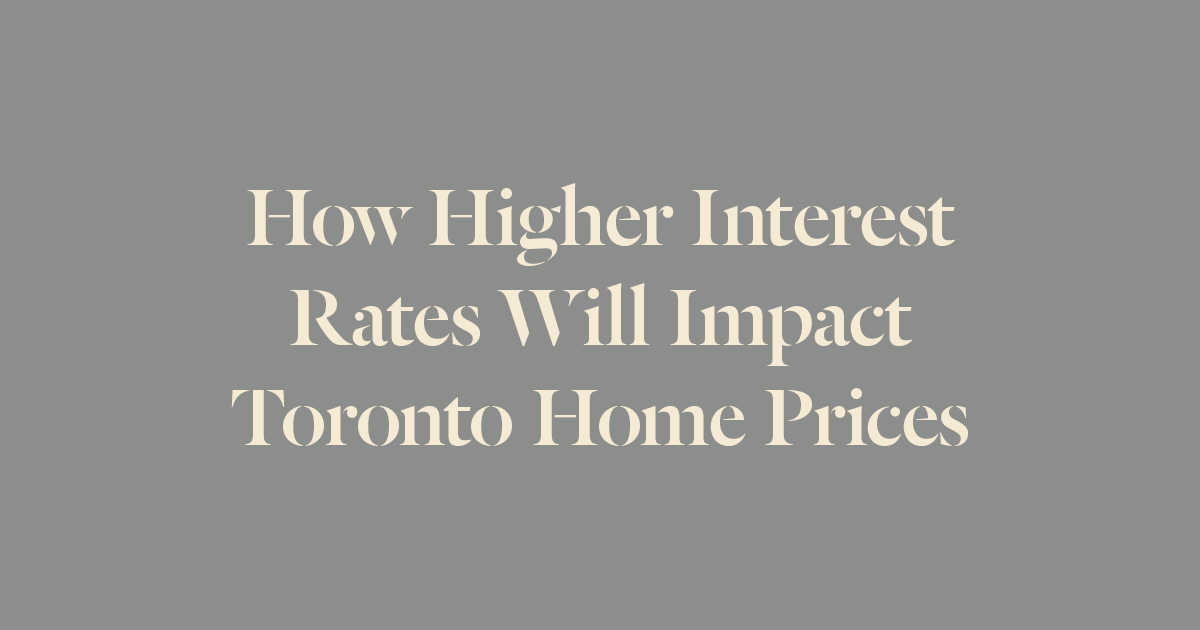 The big news in the housing market has been surging interest rates. 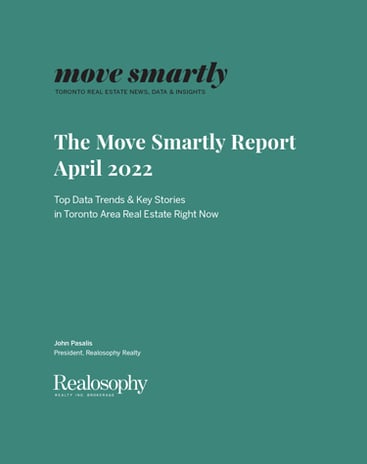 Each month, join John Pasalis, leading market analyst and Move Smartly contributor, and President of Realosophy Realty, and in a free monthly webinar as he discusses key highlights from his latest Move Smartly report and new emerging issues and answers your questions. A must for all well-informed Toronto area real estate consumers.

We’ve been hearing over the past few months that the Bank of Canada planned to raise interest rates this year to fight Canada’s high inflation rate.

The Bank of Canada raised their policy rate in April from 0.5% to 1% with the expectation that the Bank’s policy rate would eventually reach 2.5% to 3% by next year.

In March, 5-year bond yields surged more than 100 basis points, or a full 1% in a single month which pushed 5-year mortgage rates to just under 4% in early April, a significant increase from the start of the year when buyers were paying roughly 2.5% for a five-year mortgage.

In response to a question on Twitter asking how much home prices will fall if the Bank of Canada’s policy rate reaches 3%, one economist’s response stood out for being significantly more optimistic than my outlook, and the outlook of most people in the real estate and mortgage industry who I speak with.

Many of the macroeconomic factors that Brett, who was up to recently, Deputy Chief Economist at Scotiabank, highlighted are important if one’s primary short-term concern is that we may see distressed homeowners rushing to sell their homes and/or defaulting on their mortgages.

I don’t see that as a material risk.

The bigger risk to home prices, at least from my perspective, is that tomorrow's home buyers are going to have a much harder time paying today’s prices if they’re paying 5% on their mortgage compared to the low 2% range just a few months ago, and the high 1% range a year ago.

I’ve seen some people argue that this isn’t a real concern because home buyers have been qualifying for a mortgage at the stress test rate of 5.25% which suggests that households can afford mortgage rates in the 5% range.

But I think this is an oversimplification of the problem tomorrow’s home buyers will be facing.

Firstly, rising interest rates will impact how much debt buyers will qualify to borrow. The stress test used to qualify a borrower is the greater of the buyer's actual mortgage rate plus 2% or the benchmark rate which is currently 5.25%. As these are dynamic measures that will change as rates do, the stress test will also increase which will reduce the amount of debt a buyer can take on.

And while the stress test impacts how much buyers qualify to borrow, it is the actual contract rate which determines the monthly mortgage payment amount that buyers are ultimately comfortable borrowing.

A buyer who qualifies for a $1M mortgage may be willing to take on that much debt when interest rates are 1.75% but less so when rates are 4% because under the higher rate their actual mortgage payment would be roughly $1,100 per month higher.

I believe the key issue here is two-fold: In addition to the size of the interest rate changes the housing market will need to absorb is the issue of how quickly these changes happen.

In general, real estate markets tend to prefer slow and steady changes vs. sudden shocks. Mortgage interest rates doubling in just months is a shock and time will tell how the market adjusts to this higher interest rate environment.

If interest rates continue to trend up, I would not be surprised if we see some downward pressure on home prices over the next 9 to 18 months due to home buyers being unwilling or unable to pay today’s prices at tomorrow’s higher interest rates.

That being said, if we do see a decline in prices I do agree with Brett that it would likely be a temporary one due to long-term fundamental factors that have been contributing to rising home prices in the Toronto area.