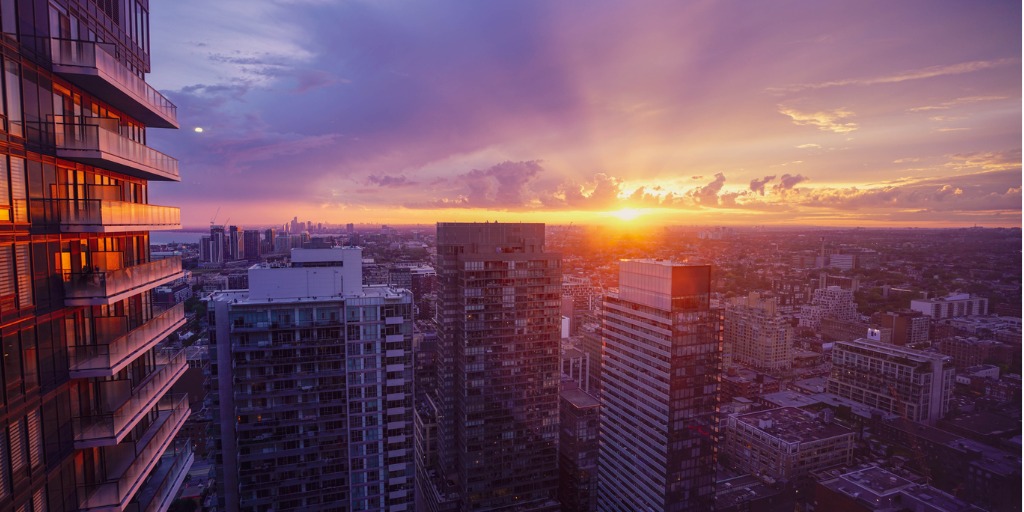 August market numbers are out - and I review how they stack up against on the ground realities now.

Looking at the most recent statistics for the Toronto area market for August 2022, we are starting to see signs that prices may plateau for now (after falling over the previous months) as inventory levels remain low.

House sales in August were down 30% over last year, but up 17% compared to July. New house listings were up 2% compared to last year. The number of houses available for sale at the end of the month, or active listings, was up 80% over last year, when demand was notably high; the active listings number today is under 2019 and 2020 levels. The Months of Inventory (MOI) which is a measure of inventory relative to the number of sales each month declined from 2.8 MOI in July to 2 MOI in August, indicating tightening supply conditions.

(See bottom of this post  for detailed monthly statistics for the Toronto Area, including house, condo and regional breakdowns, which can also be reviewed in our full report here.)

On The Ground: Toronto Home Prices Plateau Due to Low Inventory

We’ve been seeing some interesting trends on the ground over the past month in the Toronto area that line up with what we are seeing in the August sales statistics.

Firstly, buyers are deciding to jump back into the market this fall. Home buyers will often hit pause on their home buying plans during the summer months and start looking again in September, but given today’s higher interest rates and cooling prices I wasn’t certain what this fall market would look like. We have been seeing a lot more activity and interest from buyers and many actually started their home search a bit early in late August rather than September. This helped push August sales above July levels, a period when sales typically fall on a month over month basis.

The other trend we are seeing is a lot more patience from sellers. The days of panicked sellers who were desperate to sell because they already bought a home as the market started to slow down earlier this year are behind us. Many of today’s sellers are deciding to list their home for sale before they buy their next home which is allowing them to be a bit more patient. In some cases, sellers are deciding to take their homes off the market if they are not getting the price they want (see Data Dive section in this report for more on this).

While high interest rates will definitely continue to dampen buyer activity, how this impacts prices depends a lot on the volume of new listings. If new listings surge, we may see further downward pressure on prices. But at this point, I don’t think we’re going to see a significant increase in new listings and inventory this fall. 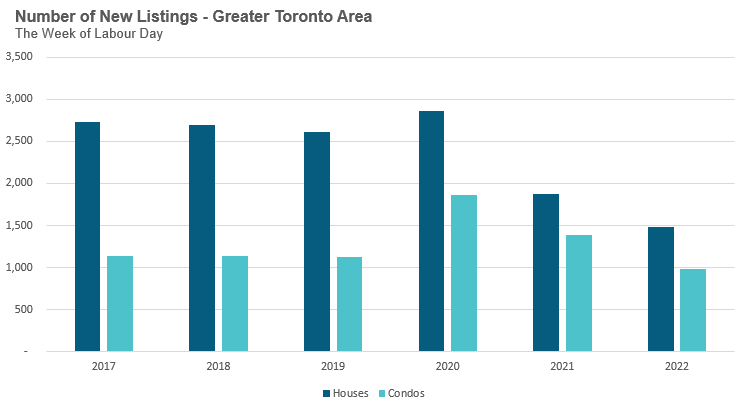 As we see in the chart above, if the lower number of new listings coming onto the market in the first week after Labour Day is an indicator of how eager low-rise home sellers are, we may find the market relatively tightly supplied in the months ahead which could constrain sales volumes.

House sales (low-rise detached, semi-detached, townhouse, etc.) in the Greater Toronto Area (GTA) in August 2022 were down 30% over the same month last year and represents a 20-year low for the month of August. While home sales typically decline from July and August, we did see a 17% increase in home sales in August compared to July. 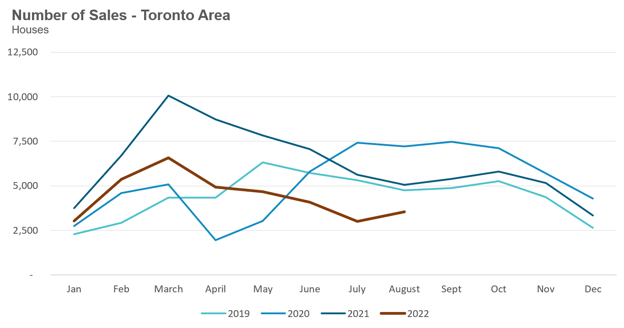 New house listings in August were up 2% over last year, but below typical new listing volumes for the month of August.

The number of houses available for sale (“active listings”) was up 80% when compared to the same month last year, but still well below pre-COVID levels for the month of August. 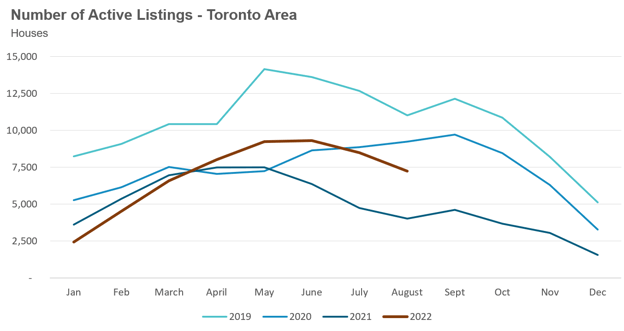 The MOI for houses declined from 2.8 MOI in July to just 2 MOI in August. The decline in the MOI is a function of a higher number of sales and fewer active listings in August when compared to July. 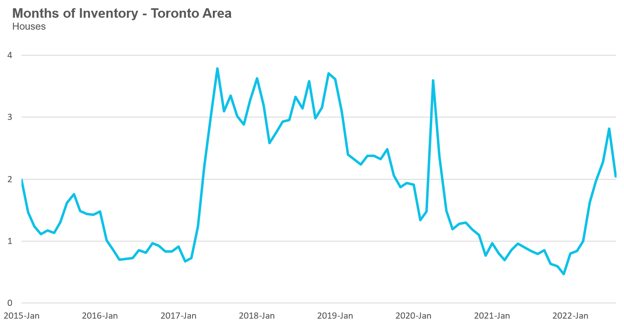 The share of houses selling for more than the owner’s asking price declined to 26% in August.

Condo (condominiums, including condo apartments, condo townhouses, etc.) sales in the Toronto area in August 2022 were down 41% over last year and well below pre-COVID sales volumes for the month of August. Sales were up 9% over the previous month. 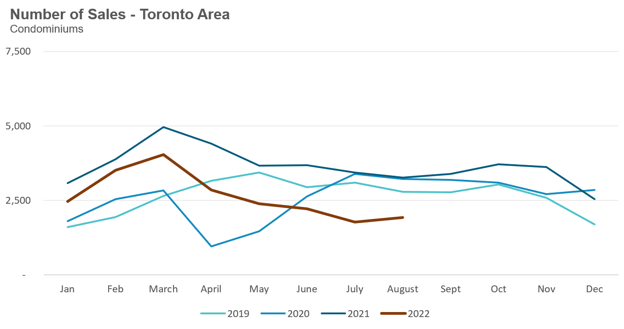 New condo listings were down 7% in August over last year and in line with historical listing volumes for the month of August. 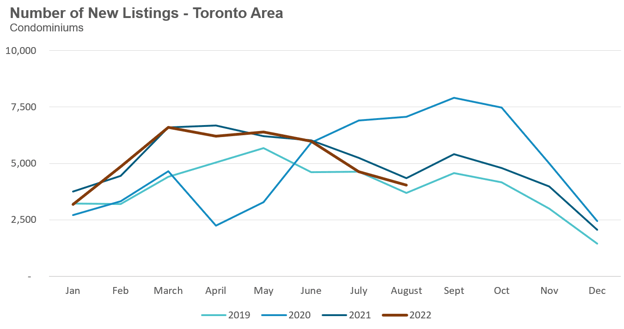 The number of condos available for sale at the end of the month, or active listings, was up 35% over last year. 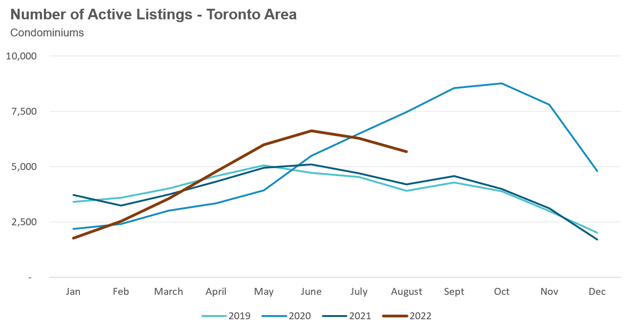 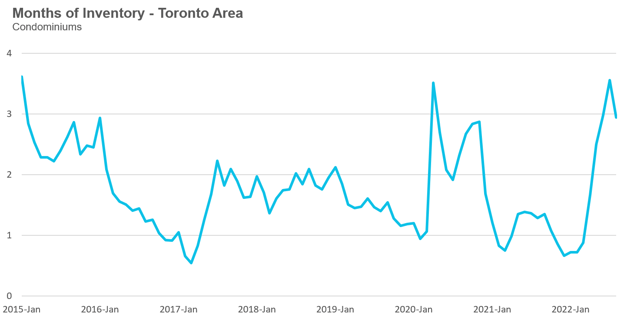 The share of condos selling for over the asking price declined to 20% in August. 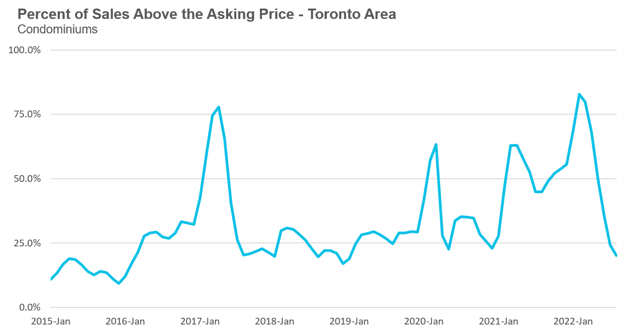 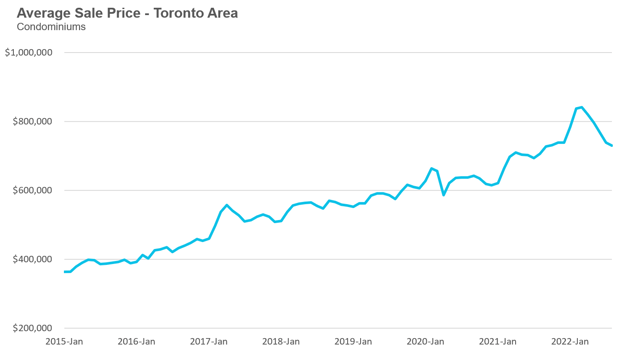 Average prices were down over last year in Durham, Halton, Peel Regions and the City of Toronto, but still up slightly in York Region. Sales were down significantly across all regions and inventory levels were well ahead of last year’s level.

While condo sales were down across the GTA, average prices continue to be up over last year in all five regions. Sales were down significantly across all regions and inventory levels were well ahead of last year’s level. 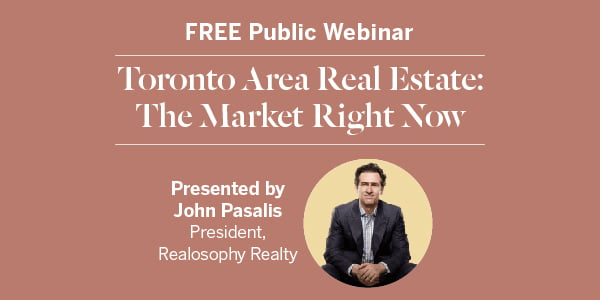