Does Toronto Have a Supply or Demand Problem?

There are always some that will perennially argue that a lack of supply is the only problem behind high home prices in Toronto - but it's not that simple. 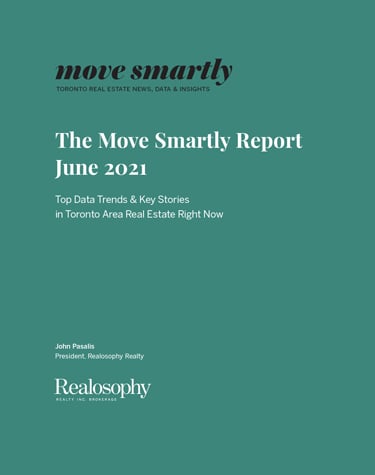 Click on video above to watch, read full story below and click on report to the left to get all the latest analysis and data on the market now.

Want to hear more? Join author John Pasalis each month for a free public webinar on the latest data & insights on the market now. Sign Up >

“Are high home prices in the Toronto area a demand or supply side problem?” is an evergreen question that keeps coming up in any discussion about Toronto’s housing affordability problem.

Most economists and housing analysts tend to have a balanced view, arguing that both demand and supply side policies are needed to curb rapidly rising home prices.

But there are always some that will perennially argue that a lack of supply is the only problem behind high home prices in Toronto.

This supply-side bias is most frequently evidenced by the real estate and building industries who tend to always fight any restrictions on the demand side, such as the introduction of foreign buyer taxes or the tightening of mortgage rules. And now it seems that some bankers are joining the supply side.

In a recent economic note, Scotiabank joined realtors and builders by arguing that a shortage of supply is the only problem leading to rising house prices and deteriorating affordability.

I’ll unpack some of the challenges with the arguments made by those insisting on a one-sided solution to a very complex policy problem.

Is Supply the Only Problem?

“[T]he fact remains that the principal challenge facing the housing market—and the underlying cause for rising prices and diminished affordability—is the substantial insufficiency of supply relative to demand.”

While it’s less surprising to hear a one-note answer from the real estate and building industries, whose outlook is coloured by the needs of their industries, Scotiabank’s rather bold position on supply is surprising for bank economists.

For an economist to say that X causes Y, they need to show more than a relationship between two variables. They need to prove that all the other factors that could lead to higher home prices (low interest rates, booming immigration etc.) had little to no impact on prices. The bar one must meet to prove causality is quite high which is why most economists rarely argue a casual relationship as Scotiabank is doing here.

Scotiabank’s report observed that the number of housing units per 1,000 residents in Canada is lower than any other G7 country and has been falling since 2016. But Canada also saw a sharp boom in population since 2015 — which is touched upon, but not properly examined by showing that the cause for rising prices and diminished affordability is the “insufficiency of supply” versus the demand shock caused by a population boom.

Most balanced economists would argue that the boom in home prices since 2015 was driven by both demand side factors like the surge in population coupled with housing supply that couldn’t keep up with the increase in demand.

Just why is this distinction so important?

Of the two factors, the one that policy makers have far more direct and immediate control over, particularly at the federal level, are immigration numbers, not housing supply.

Equally surprising is Scotiabank’s argument that macroprudential policies like ‘mortgage stress test’, which makes it harder for buyers to qualify for loans, are “ineffective band-aids.”

The mortgage stress tests are not policy measures primarily aimed at cooling the housing market, but rather at reducing the economic risks associated with heavily indebted households as highlighted in the Bank of Canada’s most recent Financial System Review (see above section). Without such measures, household debt would be significantly higher as would be the share of mortgages with a high loan-to-income ratio, running the risk of greater economic fallout in the event of an economic downturn.

Dampening demand for housing is only a side-effect of such measures.

Almost all ‘supplyists’ argue, like Scotiabank, that “the main impediments to supply growth are in planning and approval processes.” This theory cites policies, mostly at the provincial and municipal level, that limit home builders in being able to do more of what they are already doing, only faster and with lower costs.

But this approach ignores two key problems in reality.

To get a better understanding of what types of homes are being built (at the expense of others), we simply have to look at the number of house and condo completions over the past 20 years.  90,000 fewer houses between 2011-2020 were built in the Toronto area when compared against the first ten years of the 2000s, a shortfall that has mostly been made up by the building of condos. 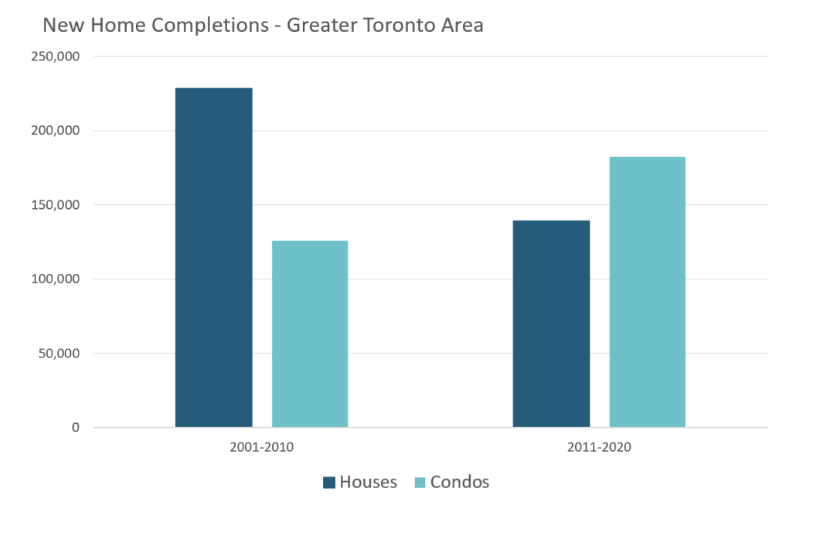 In the meantime, the segment of the market that has seen the most rapid acceleration in prices has been houses.

Our federal government plans to increase immigration targets to support the country’s economic recovery post-pandemic — but how do policymakers plan to house all of these new immigrants? By building an ever increasing number of 600 sq ft condominiums favoured by investors and proportionately fewer family-sized houses each year?

The other problem with the 'supplyist’ argument — that if Toronto's new housing supply was more elastic (i.e., able to be increased rapidly in response to demand), home prices wouldn’t rise as rapidly — is the flip-side of their incorrect tendency to see all supply as being the same, which is to see all demand as being the same.

This assumption hasn’t held up well historically when new supply of housing is largely bought by investors — and not end-users (i.e., buyers who want to live in the homes, not rent them out or hold on vacant properties for their economic value). The housing markets in Phoenix, Las Vegas and Dubai all have a relatively elastic supply of new housing, but that didn’t stop them from experiencing significant housing bubbles — and a decline in affordability — in the years leading up to the financial crisis of 2008 and significant housing corrections — and economic harm to households — after the bubbles burst.

These markets all have one thing in common with Toronto’s condo market today — the vast majority of their new housing supply was bought by investors, not end-users. When new housing supply is driven almost entirely by investors it can lead to a number of potential risks that tend to undermine overall housing affordability and the economic health of end-users who are already in the market.

First, investors are more prone to base their decisions on extrapolative expectations —  the belief that prices can only go up forever because there’s not enough supply and are willing to pay significantly more than end-users. This is partly why pre-construction condominiums in Toronto sell for much more than resale condos. According to Toronto area condominium research firm Urbanation, during the first quarter of 2021, pre-construction condos in Toronto sold for an average price of $1,416 per square foot, compared to just over $1,000 for resale condominiums, a segment which is more heavily dominated by end-users.

Second, when investors drive new housing supply, it leads to the risk of overbuilding the type of property that investors are buying. Might we find ourselves with more 500-600 sq ft condominiums than we need five years from now? Possibly. And any resulting listings glut from that overbuild would potentially impact not only end-users who own those same types of units, but potentially other segments of the market, as many who invest in such units also tend to own other properties which they may not be able to hold onto as they come under financial pressure.

When thinking about demand for new housing supply, it’s also important to consider how many new homes are intended for renters versus owner-occupiers.

The Canadian Mortgage and Housing Corporation (CMHC) tracks purpose-built rental completions (i.e., units that are exclusively intended to be rentals, as opposed to house and condo units which may be lived in by owners or rented out) separately, and over the past twenty years they have made up roughly 5% of all completions.

But this, of course, does not represent all of the properties that are intended to be used as rentals since the majority of condominiums bought pre-construction end up being used as rental properties, as CMHC observes:

The share of newly completed units added to the condominium universe and leased was almost 57% — above the average 50% that has been the case over the past 5-years.

This expansion in investor-financed rental units over end-use units largely explains why over the past ten years, home prices have doubled while average rents are only up 30%. 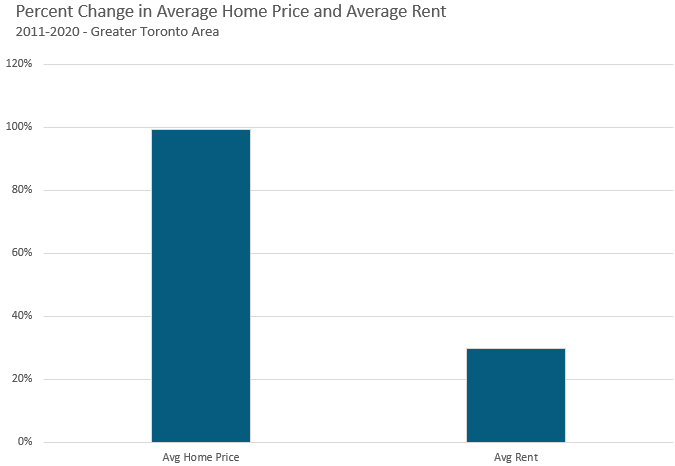 If policy makers aim to fill the housing supply gap by increasing the number of condominium completions in the future, the end result will be the same result we’ve seen over the previous ten years. Rapidly rising home prices and modest growth in rents since more and more completions will be used as rental properties versus owner-occupied homes.

Given this, an important part of fixing the so-called “supply side” issue is thinking about how to move more of our supply into the hands of end-users rather than domestic and international investors, thereby slowing down the financialization of housing.

We Need Bold Demand and Supply Side Policies

Despite Scotiabank’s assertions that there is one cause for high home prices, there is never one single reason for elevated house prices and deteriorating affordability.

High home prices are a product of both supply and demand side factors and policies.

On the demand side, there are plenty of undesirable outcomes — too many investors (both domestic and foreign) buying up new condos strictly for the expected capital gain, speculators flipping properties quickly for short-term gains and global investors using Canadian homes as vacant safety deposit boxes to safely store their capital are all uses that should be curbed using demand-side policies.

Unlike demand side policies which tend to have an immediate impact on the market, trying to solve affordability problems via supply side policies is a very long-term approach that is far less certain. This doesn’t mean policy makers should not be trying to reduce the many barriers to allowing for new housing supply, but doing nothing on the demand side now is not a bet policy makers should be making.

As a start, our federal government's decision to raise immigration targets today without making the corresponding supply-side housing policy changes needed to increase supply is a decision to inflate home prices out of reach of most Canadians tomorrow — including many of our newest fellow citizens. Going forward, immigration targets need to line up with bold housing policy to avoid a rapid acceleration in house prices that hurts affordability and the viability of our society as a well-functioning whole.