A short while, I had lamented on Toronto’s seemingly lack of recognition to buildings that were erected during its formative years; cement and cold steel had been laid down over top of our city’s collective heritage in the name of innovation. Construction of the Shangri-La condo had been halted so urban archaeologists could excavate as many artifacts as possible during the four months they were granted; perhaps the ghosts of Toronto’s past are determined to not be paved over and built upon once more.

The Distillery District is a small area just east of Toronto’s downtown core, home to a terrifically historic collection of buildings. Founded in 1832, the Gooderham and Worts distillery became the largest in the British Empire specializing in whisky (and, later on, anti-freeze) – these preserved red-brick Victorian-era buildings make up almost the entirety of district. Cobble stone roads line all the interior pedestrian-friendly streets- a nice way of saying 'leave your cars at home please'.

A designated National Historic site, this area boasts art galleries featuring local artists and many unique furniture and design retailers; it is home to a variety of institutions such as a Deaf Culture Center and the Young Centre for the Performing Arts.

Situated along Front Street, in between Parliament and Cherry Streets this neighbourhood is easily accessible via the subway and a quick transfer to the 65 A Parliament bus, bringing you to Front Street one block north of the district.  The 504 King streetcar is also an option. It is also easy to get to by car; however, your car must stay on the periphery of the district. 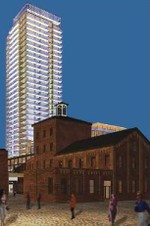 Pure Spirit's 378 suites will stand 32 stories overlooking the Distillery Dustrict.  Suites range from 544  square feet priced at $189,900 to 2,082 square foot penthouse units, priced at $924,900.  Touted for its proximity to the Distillery District, the location of Pure Spirit is sure to drive sales. Stated by its development and design team,it is "a loft and condominium community that will provide the opportunity to not only visit this unique heritage village but to actually live in it”; living within walking distance from Toronto favourites such as the St.Lawrence Market doesn't hurt either.

and through, the Distillery District is a living piece of Toronto history - there are rumours that founder James Worts’ ghost still haunts the area. Having operated as a distillery up until the 1990s, the district avoided the demolition and new construction that was characteristic of early and mid-twentieth century. Although the replica windmill built by the Gooderham family was demolished in the 1950s and the site was paved over to make way for the Gardiner Expressway (I am starting to think that ‘paving over history’ should be Toronto’s moniker) the remaining buildings continue to be well-preserved and cherished.