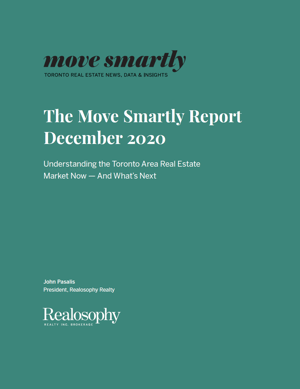 As many media headlines have noted, the impact of Covid-19 and the need for entire households to work and in some cases school children from home, has led many to seek out bigger homes in Toronto suburbs. Do the numbers show a notable impact in terms of how competitive those markets have become due to this shift?

This month, I dig into the data to uncover the underlying trends in the market over the past couple of years to put today’s trends into context.

This analysis will look at the market for houses (detached, semi-detached and row houses) in Toronto’s suburbs – Durham, Halton, Peel and York Regions.

For the first three quarters of 2019, the market for suburban houses was quite balanced with the sales-to-new-listings ratio (SNLR) in the 40-55% range. By the fourth quarter, the market had changed suddenly as sales began to outpace the supply of new listings coming on the market. As the SNLR moves above 55%, it signals that the market is moving towards a seller's market with demand outpacing supply.

This led to a shortage of inventory during the first quarter of 2020 as indicated by low Months of Inventory (MOI) ratios. Unlike the SNLR which focuses on the supply of new listings entering the market, the MOI compares all active listings on the market in a given month against the number of sales in that period. 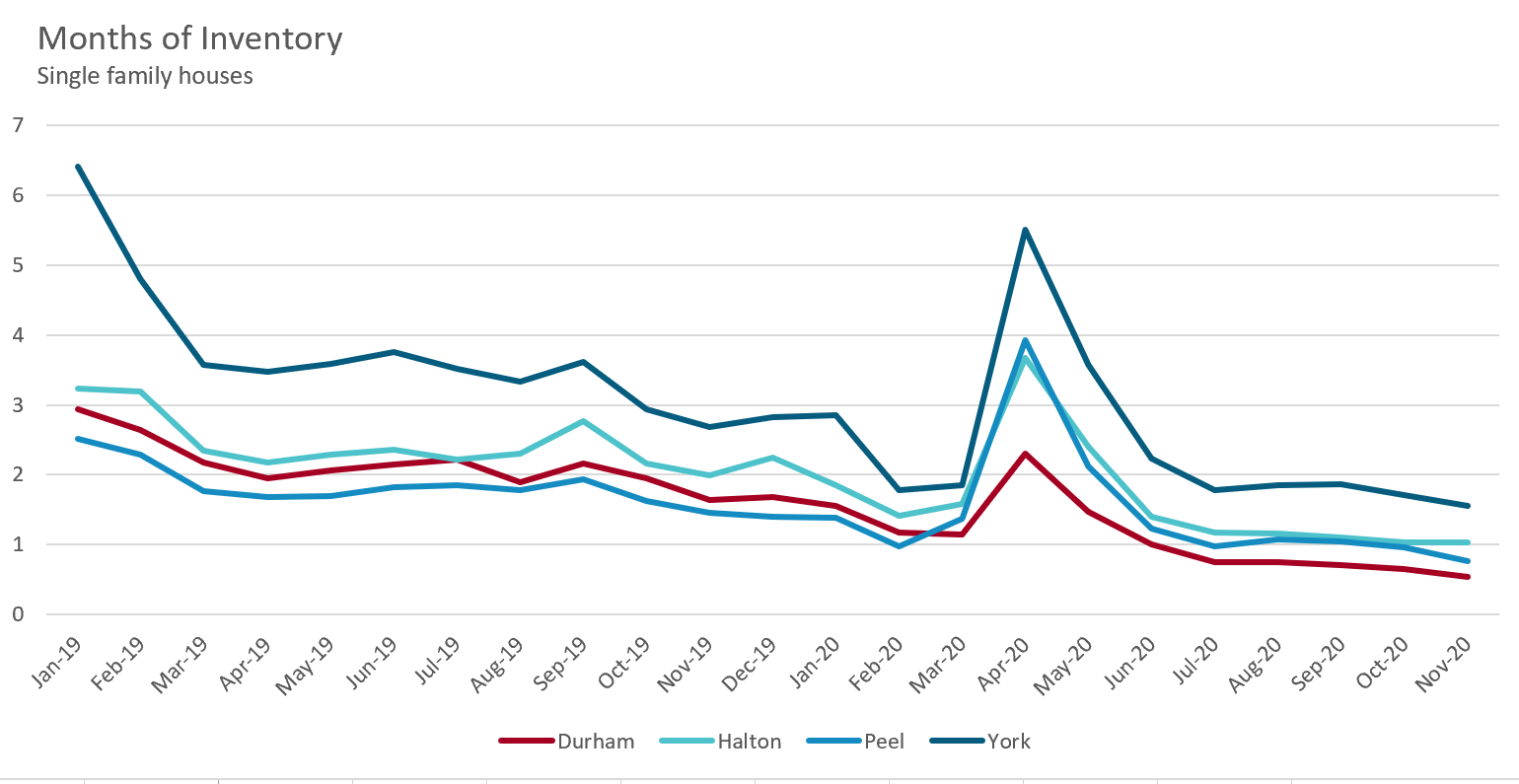 The dwindling inventory of houses led to a competitive market in the first quarter of 2020. One way of seeing just how competitive the market had become is to compare the percentage of homes that sold for more than the seller’s asking price.

The market cooled during the second quarter of 2020 during Ontario’s first lockdown due to the COVID-19 pandemic, but quickly rebounded in the third quarter as buyers returned to the market once able to. In all four Toronto Area regions, the SNLR has been trending up over the past eight months pushing the market further into Seller’s Market territory. In November, the SNLR was at or above 100% in three of the four regions.

The tight supply has led to between 36% of homes (in York) to 66% (in Durham) selling for above asking price. Durham’s housing market was the most competitive with the share of homes selling above asking price eclipsing the peak levels reached during the first quarter of 2020.

How have these trends impacted suburban house prices? The chart below shows the year over year change in average prices.

We can see that home prices were appreciating at a relatively modest rate (at or below 5%) for most of 2019. Home price appreciation began to accelerate in the fourth quarter of 2019 and the first quarter of 2020 before cooling in the second quarter of this year. Since June, home prices have been rising by double digits with Durham and Halton house prices rising by approximately 20% over the past four months.

This rapid appreciation in house prices once again presents a number of problems and risks for the Toronto area housing market.

When home prices are appreciating by more than 20% per year, it very quickly erodes any affordability that may have been present in the market before the acceleration in prices. For example, in November 2019, the average price for a single family house in Durham Region, the most affordable of Toronto’s suburbs, was $641K. One year later, the average price for a house in Durham is now $795K, a 24% increase in one year.

Many policy makers, including The Bank of Canada have characterized the current acceleration in home prices as "pent-up demand" after the first Covid-19 imposed lockdown of the year.

In May of this year, the Canadian Mortgage and Housing Corporation (CMHC) painted quite the opposite picture of Canada's housing market in the wake of Covid-19, suggesting that high levels of unemployment would lead to a spike in foreclosures and home prices falling by as much as 18% from their pre-COVID levels.

But as we have seen above, the market in the Toronto suburbs has moved in the opposite direction, heating up considerably with MOI levels falling every month and home prices rising by double digits. The SNLR has been well above 70% for most of the second half of this year for Durham, Halton and Peel regions which according to CMHC itself is normally indicative of a market that is "overheating." In spite of this, the CMHC is sticking to their forecast of a decline in home prices by roughly 10% from their pre-COVID levels.

I don't see eye-to-eye with policy makers who see rising unemployment and a surge in foreclosures as the biggest risk to the Toronto area housing market right now. Instead, it is the risk that the bubble-like appreciation we were seeing in the first quarter of 2020 pre-Covid is re-inflating.

As noted, in the six months since the initial Covid lockdown, this market heating has been explained as being due to "pent-up demand." But pent-up demand was not behind the acceleration in house prices during the first, pre-Covid quarter of this year and the numbers are suggesting that what we are seeing today is a resumption of the trends that were present before the pandemic. And as we have seen as recently as in the last four years, bubbly conditions in the Toronto area can lead to substantial losses for those caught in them and pose wider risks to the rest of the market and economy.

The other risk to Toronto's housing market is that the market for houses and downtown condos are moving in completely different directions which makes the policy makers job that much more difficult. While the market for downtown condos shouldn't impact house prices directly, a sustained decline in condo rents and prices does risk wider damage to the economy as a not insignificant portion of Ontario's economy is built on the assumption that condo prices can only ever go up. Trying to cool one market segment while avoiding the decline of another is not a policy task that many would envy.

R Listing: Why Condo Towns are the Next Big Thing

Nicole Harrington in Listings of the Week  Here's my closer look at a recent Realosophy listing...
Read More
| GTA

Six in the Six: Top Toronto Listings this Week - GTA

Nicole Harrington in Listings of the Week This is the GTA edition of the six in the six, where we...
Read More