How seriously should we take the latest alarm from Canada's top housing authority?

As seen in this month's Move Smartly Report for October 2021 - get all of the latest data, analysis and stories on the Toronto Area real estate market right now.

The Canada Mortgage and Housing Corporation (CMHC) released their latest Housing Market Assessment last month and their assessment for the market vulnerability for Canada’s housing market was raised from moderate to high risk. 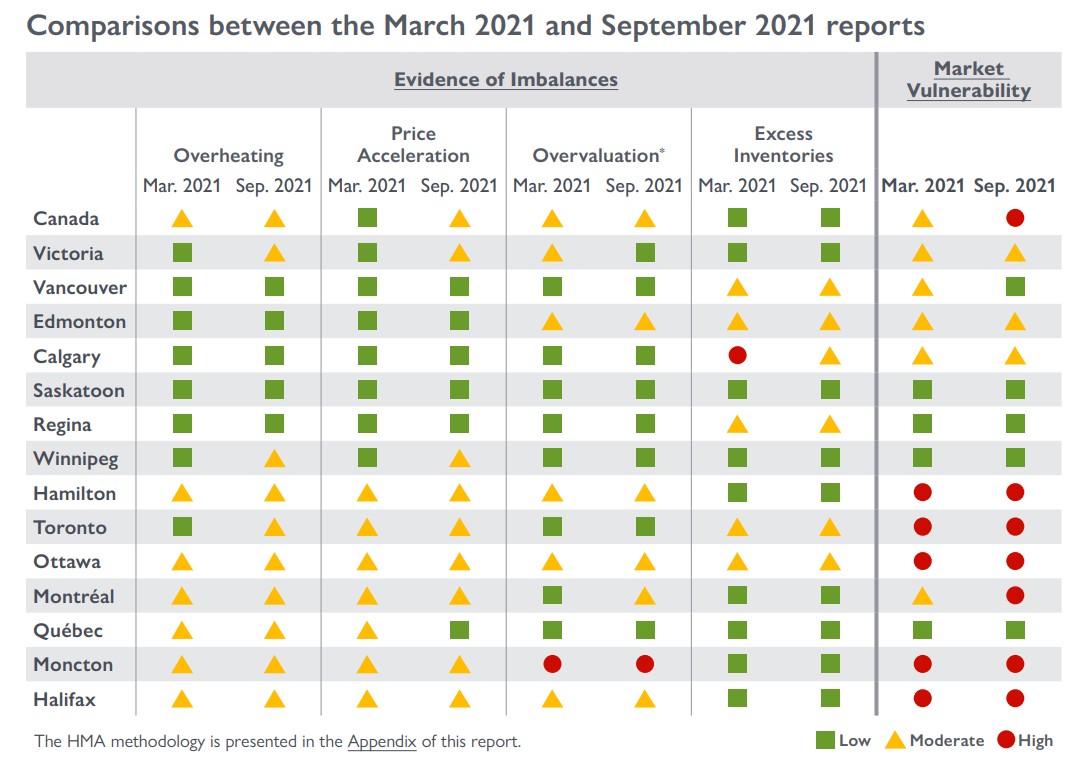 Highlighting risks in Canada’s housing market is an important job, but given CMHC’s recent track record I do worry that their words of caution will fall on deaf ears.

For those who may not recall, CMHC released a very pessimistic forecast at the start of the COVID-19 pandemic predicting that prices would fall 9%-19%.

But the problem wasn’t so much with their forecast, which was reasonable given the uncertainty at the start of the pandemic, but rather their overconfidence that their forecast would be correct.  Their CEO at the time went as far as saying that people should “question the motivation of anyone who wants you to believe prices will go up” during the pandemic.

But prices did go up, surging up as much as 30% in much of the country.

CMHC’s concern that Canada’s housing market is at high risk is arguably far more important and relevant today given the strong rate of appreciation we have seen over the past year. This does not mean I think house prices are going to fall anytime soon, but it would be foolish to not be concerned.

Any student of history knows that rapid rises in house prices and debt are a cause for concern, not celebration. University of Chicago economist and co-author of the book House of Debt Amir Sufi reminded us of these risks recently:

“A robust finding in the macro-finance literature is that a large rise in property prices and the associated debt predicts (1) a decline in economic activity, (2) a rise in probability of financial crisis, and (3) a crash in bank equity prices ... After we wrote House of Debt, people used to say, "what about china"? i used to say, "i don't know much about china, but i know that historical episodes of strong house price and debt growth are usually followed by bad things"

Most people I speak with seem to believe that these types of historical trends don’t apply to Canada, and especially not Toronto. We’re a special market where house prices only move in one direction, straight up. Immune to any of the fluctuations one may come to expect from a normal housing cycle because in Canada, the underlying cause of high house prices is a “lack of supply”, and for that reason —  prices can never go down.

I personally don’t subscribe to that belief — I do believe in historical trends, but the challenge with these trends is that one never knows when the down cycle might start, what might trigger it and how severe it’s going to be.

I personally think the risk of a downward trend in Canadian house prices in the short-term is very low. Inventory levels are still far too low and even if the market shows early signs of cooling, I’m confident policy makers have enough levers to stimulate the housing market further — at least over the short term.

What will the market look like 2-3 years from now is anyone’s guess, but I feel it’s always more prudent to be on the lookout for early warning signs in the market rather than assuming prices will keep rising by double digits forever.